With an astonishing 11 world surfing titles to his name, Kelly Slater has the kind of lead in his sport that would leave Jack Nicklaus and Roger Federer looking on with envy.

The American surfing great appears close to untouchable at the top and agrees the world’s current stars will struggle to catch him – but not due to a lack of talent. 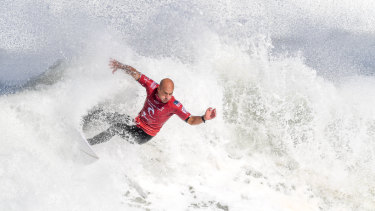 Kelly Slater says it will be hard for John John Florence and Gabriel Medina to reach his number of 11 championships.Credit:Justin McManus

Hawaiian John John Florence and Brazilian Gabriel Medina – aged 26 and 25 respectively – both have two world titles and have ruled supreme in four of the past five seasons.

But Slater, who was eliminated in the Rip Curl Pro quarter-finals by Australian Ryan Callinan, says Florence and Medina might work against each other in the chase for world titles and his own high-water mark might be well beyond them.

“The fact that they’re in the same era makes me think no,” said the 47-year-old after what could be his final professional competition at Bells Beach.

As pulsating two-metre-plus waves produced a memorable finale to this year's Bells competition, Florence broke through to claim his first trophy at the iconic location. His path to the final included a gruelling quarter-final win over Medina.

“I don’t think they dislike each other,” said Slater. “It’s not going to be a rivalry like that. These guys all seem to get along somewhat.

“[But] just on skill level alone – being at the top of their game at the same time they’re going to go back and forth. They’re really close on their levels right now and age and all that.”

A massive swell converged on the Bells bowl and tested the mettle of the world’s best surfers with especially brutal conditions on Friday before they eased for Saturday’s finals.

When asked about this year’s famed conditions, Kelly noted that they weren’t “classic”.

“This is the biggest swell I’ve ever seen for the contest, but it’s not the best.

“I mean if you look back to last week everyone has a ‘goldfish memory’ when they think of this week.

“There was some good scoring because guys figured out the conditions and they were scoring relative to the conditions – not real classic by any means.”