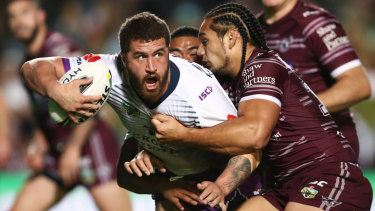 Melbourne Storm will be relying on leadership from the likes of Kenny Bromwich.Credit:AAP

Kenny Bromwich has performed countless roles at the Melbourne Storm.

The utility forward has filled in across the forward pack, hooker and even snuck into the centres when injuries have hit the team.

But his latest role is perhaps his proudest as the long-serving Storm forward joins the club's leadership group this season.

Captain Cameron Smith continues to lead the Storm but he will have two vice-captains for the first time in 12 years with Jesse Bromwich and Dale Finucane taking those spots and Kenny Bromwich and Will Chambers rounding out the group.

Kenny Bromwich joined the club as a teenager and made his first-grade debut in 2013 before battling his way from the fringe of the side to become a New Zealand international and a player that Storm coach Craig Bellamy can rely on.

With Billy Slater retiring and Tim Glasby moving to Newcastle, an opening appeared for Bromwich and he was happy to take it.

Bellamy has already called this year's Storm list the youngest he can remember so leadership from the likes of Bromwich will be vital.

"Craig spoke to me and said with a few guys leaving I could potentially be the next one up," Bromwich said.

"I was pretty happy when he said that but at the same time I didn't know what to expect, but these boys have welcomed me in.

"It's just good to be in and around these boys and just soak up what they are talking about and the discussions they have."

Bromwich is one of the Storm players to move through the team's emerging leaders program led by former Collingwood premiership captain Nick Maxwell, and Bromwich credited the retired AFL back for his guidance.

"You can learn something from anywhere mate," Bromwich said.

"Nick Maxwell was a good leader [in his career] and some of the things he has done with the boys have been good and he's been really helpful in my development as a leader."

After playing with the Kiwis on their tour of England late least year, Bromwich had a delayed break so didn't return to training until January but he already sees the side making good strides towards again being a contender in 2019.

"I can't wait for the season to start and get back into the weekly routine and the weekly grind we have. It can't come soon enough," Bromwich said.

"Coming back off the England tour with the Kiwis, I went and spent time with my family in NZ. I like getting back and visiting the my grandparents. My family and I had a good break doing that."

The Storm play New Zealand Warriors at GMHBA Stadium, Geelong on February 22 in a trial match. They will kick-off the NRL season against Brisbane Broncos at AAMI Park on March 14.