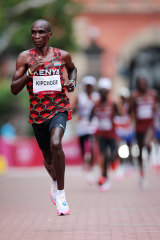 Eliud Kipchoge is set to go back-to-back after claiming gold in Rio. Credit:Getty

Eliud Kipchoge of Kenya has won the Tokyo Olympics men’s marathon on Sunday, his second gold for the event after Rio 2016.

Kipchoge becomes only the third runner to have achieved back-to-back gold medals in Olympic marathon, further cementing his place among the all-time marathon greats.

“I am very excited to be here in the Olympic village in Japan,” Kipchoge tweeted along with a photo of himself taken in front of the Olympic rings in the village before the race.

“It is great that we are able to run the Olympic marathon in these unusual times. On Sunday, I will try to defend my Olympic marathon title from Rio de Janeiro. I cannot wait to witness a wonderful event.

“Niko tayari,” he said, meaning “I am ready” in Swahili.

Kipchoge joins Ethiopia’s Abebe Bikila (1960 and 1964) and East Germany’s Waldemar Cierpinski (1976 and 1980) as the only runners to win two consecutive gold medals on the Olympic stage. 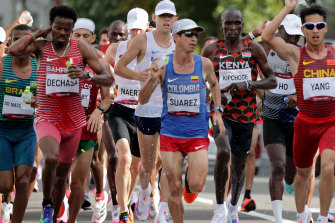 Runners take water at the refreshment point while competing in the men’s marathon in Sapporo, Japan, on Sunday.Credit:Getty Images

Australian Jack Rayner was battling a thigh injury in the lead-up and pulled out of the race in the early stages.

With the humidity over 75 per cent in a 31-degree day in Sapporo, competitors were dropping like flies. With 4 kilometres to go 22 runners had dropped out of the race.

But spectators gathered along the course were staying put, relishing a rare opportunity to take part in the Olympics in person. 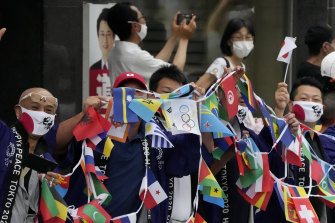 Spectators join the fun at the Tokyo Olympics men’s marathon on Sunday.Credit:AP