Front-row veteran Sekope Kepu has been cleared of injury and giant South Afrian second-rower Le Roux Roets will be thrown into the selection mix for the Waratahs' trip to Japan this week.

Adam Ashley-Cooper looks almost certain to sit out the round with a head knock, but the Waratahs emerged otherwise unscathed from their first-round heartbreaker at Brookvale Oval, with Kepu feeling no major ill effects after a hit to the throat. 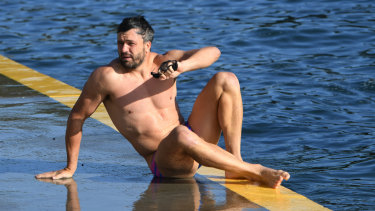 Easing back: Adam Ashley-Cooper looks set to miss the Waratahs’ second game of the season. Credit:AAP

Ashley-Cooper took part in the team's recovery session at Clovelly Beach on Monday morning but defence coach Steve Tandy confirmed the veteran centre would observe return-to-play protocols after a crunching tackle at the end of the Hurricanes' loss. Given the team fly out on Wednesday night, the coaches may choose to rule him out early.

Kepu's clearance and Roets' availability are good news for a pack that has work to do if they are to compete with the best this season.

The NSW lineout functioned at 77 per cent and scrum at 75 per cent, both well below last year's rates of 88 per cent (lineout) and 90 per cent (scrum). Despite a strong effort from the debutant props – one of them, Chris Talakai, was a part-time squad member up until January – to win a penalty in the dying minutes of the match, forwards coach Simon Cron will be going back to basics with his tight five this week.

Starting loosehead Harry Johnson-Holmes, who benefited from 18 games off the bench last year, said the pack were pleased with their round-one efforts but knew there was scope for major improvement. 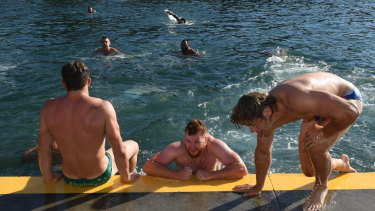 Can do better: Harry Johnson-Holmes (centre) concedes the NSW scrum has work to do after their opening loss to the Hurricanes. Credit:AAP

"The Hurricanes boast a pretty impressive forward pack and we knew that going into the game," Johnson-Holmes said.

"The lineout did very well, there's a few things to tweak with the scrums but that comes with a bit of inexperience and connection stuff."

Tandy issued a pass mark for defence, but with 14 penalties conceded to the Hurricanes' 12, the Welshman kept the praise low-key.

"It was a decent start point for us defensively. We had to defend a lot of sets," he said.

"Discipline is something we have to look at. We conceded too many soft penalties and gave the Hurricanes a little too much field position, but I thought the way the boys fronted up and had to defend for long periods, that they've done that pretty well."

The Sunwolves pose a different challenge. The Tony Brown-coached team gave up a 10-3 lead to concede five tries to the Sharks, but their trademark positive style will challenge the Waratahs to be accurate and conscientious in defence.

"I watched the Sharks game, I know it was 45-10 on the scoreboard but they had some opportunities to score more points and they were 10-3 up," Tandy said.

"They're really lively and they do play, they're very positive. If a couple of things stick and we're not on the money defensively they'll score points."