The Queensland Reds have made a rough start to their two-match South African road trip after falling 32-17 to the Bulls in Pretoria.

Stinging after a late collapse in their home loss to the Jaguares, the Bulls bounced back in style as they outmuscled the Reds to move into top spot in the South African conference. 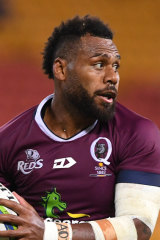 The Bulls scored five tries to two at Loftus Versfeld behind a powerhouse display from their forward pack, lock RG Snyman stepping up in the absence of veteran Duane Vermeulen who was rested because of Springboks protocols.

Reds captain Samu Kerevi crossed for a pair of tries in the second half but it was not enough to prevent them falling to fourth in the Australian conference before their clash with the Sharks in Durban on Friday.

"We didn't play too well, that's on us," Kerevi said after the loss.

"The Bulls put us under tremendous pressure and we just didn't finish off the opportunities that we got."

The visitors made an ideal start after a handling error and offside play from the Bulls in the opening minute, Bryce Hegarty kicking the penalty goal for a 3-0 lead.

But the hosts struck back as they muscled their way into Reds territory for prop Lizo Gqoboka to barge over from close range.

Handre Pollard added a penalty goal in the 15th minute before the Bulls missed a golden opportunity to extend their advantage nine minutes later, winger Jade Stighling losing control of the ball as he dove over in the corner.

A long clearing kick resulting in a penalty against fullback Hamish Stewart handed the Bulls another chance close to the Reds line, Marco van Staden driving over from the ensuing lineout to edge ahead 13-3 after 28 minutes.

Winger Jack Hardy came close to breaking through for a Reds try nearing halftime but the visitors found themselves down 10 points at the main break.

The Reds made the worst possible start to the second half as the Bulls won possession from the restart, setting up Pollard to score under the posts for a 20-3 lead.

Kerevi gave the visitors some hope midway through the second half by bursting on to a slick offload from Lukhan Salakaia-Loto to score the Reds' first try of the match.

But the Bulls countered with Snyman breaking into the backfield before finding flanker Hanro Leibenberg in support to crash over for their fourth try of the game.

The hosts quickly added a fifth five-pointer to seal the result, Pollard's cross-field kick finding Stighling who made no mistake grounding the ball on this occasion.

Kerevi powered his way through the Bulls defence for his second try in the 69th minute but it proved little consolation as the Reds lost their fifth game of the season.