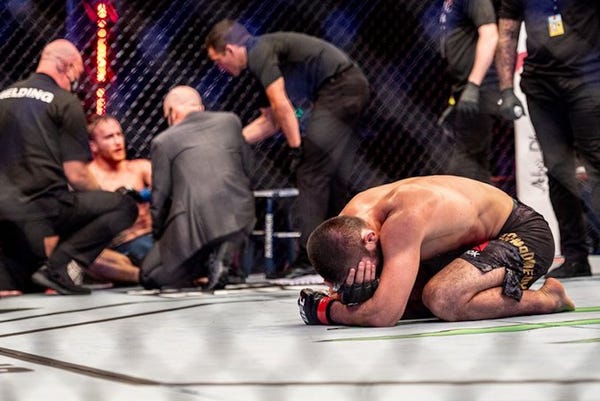 FIGHT ISLAND — Khabib Nurmagomedov sent Justin Gaethje to sleep, cried in the middle of the Octagon at UFC 254, and then announced his retirement from professional fighting.

It was yet another submission for the Dagestan sambo specialist who extended his professional MMA record to 29-0 with a victory over the American striking maestro Justin Gaethje.

It brings to an end an extraordinary career as Nurmagomedov, the UFC lightweight champion, took his gloves off for the final time at Abu Dhabi — a place which has become his home away from home.

When the UFC President Dana White, in conjunction with the Abu Dhabi department of culture and tourism (DCT), built an area in which the world's leading mixed martial arts firm could hold international events amid the coronavirus pandemic, Fight Island became an unexpected star in July.

And then there were the fights.

Perhaps the only way the second Fight Island festival from September to October could top the inaugural event in July was the inclusion of Nurmagomeov.

But very few outside Nurmagomedov's family could have expected his 29th match, and win, to be his last.

"This is my last fight," Nurmagomedov said, months after his dad and trainer, Abdulmanap Nurmagomedov, died after coronavirus complications. "No way I'm going to come here without my father."

Watch any Nurmagomedov fight and you'll see dominance regardless of the level he's competed at.

He's out-pointed Rafael dos Anjos, submitted Conor McGregor with a neck crank before flying out the cage like an eagle to attack the Irishman's Octagonside friends, and he's made Dustin Poirier tap to a rear-naked choke at UFC 242 last year.

The Fight Island finale on Saturday, October 24 inside the purpose-built Flash Forum on Yas Island was his first fight since defeating Poirier, his first of the pandemic, and his first since losing his father.

It was also one of his best. A win in which he pressed Gaethje from the start, forcing an uncomfortable pace onto his opponent.