He will be Newcastle’s oldest player next season, but Shaun Kenny-Dowall reckons he feels more like a spring chicken than an ageing ex-Rooster.

Turning 31 later this month, the Kiwi international is the Knights’ senior professional not only by birth date, but also in terms of games played. 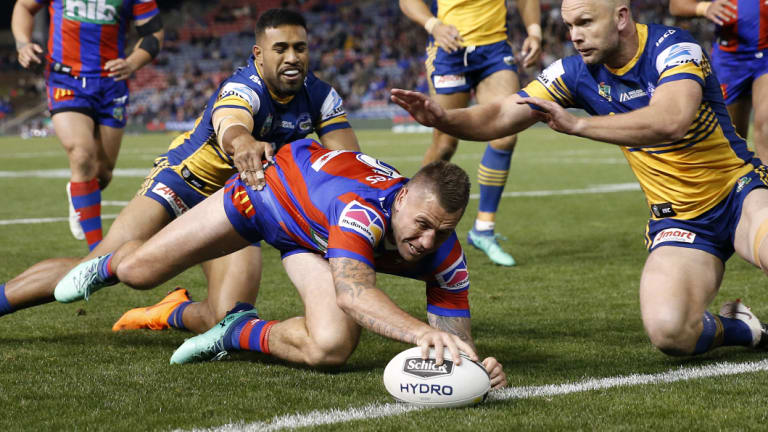 His career tally of 254 NRL appearances is one more than skipper Mitchell Pearce, who has been his teammate since they made their debuts within a week of each other for the Roosters in 2007.

And as far as Kenny-Dowall is concerned, he has a good few years left in him as he sets about joining the exclusive list of players to have featured in 300 or more top-grade games.

“Yeah, I've definitely thought about that,” he told the Newcastle Herald.

“I still feel like I've got a lot to give in this game.

“I’ve definitely set my sights on it. I’ve got visions of playing 300 for sure.

“I think it’s a great honour and testament to anyone who can play 300 in such a tough game, and I think it’s a definite possibility.”

Off contract at the end of this season, Kenny-Dowall is happy to bide his time before the negotiation process kicks off.

"There's no rush,” he said. “I wanted to let my football do the talking.

"I know I'll have to earn another contract, and that means playing good football, which is what I have to do."

Since arriving in Newcastle midway through 2017, after his much-publicised release from the Roosters, Kenny-Dowall has reaffirmed his reputation as one of rugby league’s most resilient characters.

“As long as I feel, mentally and physically, that I can still perform to a high standard, I want to keep going,” he said.

“I’ve had no major injuries.

"I’ve really managed to look after myself physically and, touch wood, I played every game last year and haven't missed a session this pre-season.

"So the body and the mind feel really good.”

Along the way, Kenny-Dowall has racked up 131 NRL tries, putting him 24th on the all-time list and behind only Greg Inglis (149), Brett Morris (146) and Michael Jennings (137) among current players.

For Kenny-Dowall, who sits behind only Greg Inglis, Brett Morris and Michael Jennings for NRL tries among current players, the top priority is to help the Knights qualify for the business end of the 2019 season.

A big-game specialist who has appeared in 21 Tests and two grand finals – including the Roosters’ 2013 premiership triumph – he is excited about the calibre of imports who have arrived at Newcastle since the end of last season.

He was the first high-profile player to put his faith in coach Nathan Brown’s rebuilding plan.

“It’s a credit to the people up the top,” he said.

“Browny, he had a plan and I felt passionate about the direction he wanted to take the club.

“I knew Newcastle was a club with a proud history, and Browny was very strategic about re-establishing the Knights as a force.

“I’m sure this year we’re going to be very competitive.

“As long as we work hard and are on the same page, the possibilities are endless.”