He bowled Australia to victory against India in Adelaide in the first Test of the series played 51 years ago when he took five wickets in an innings for the second time in his Test career.

He only played two more tests before he was dropped for the final game of the four-Test series, his Test career ending after eight games with 23 wickets to his name.

If that sounds like the opening of a ''who am I?'' quiz, it's warranted because David Renneberg is not a name that comes to mind for any Australian cricket fan under 50.

However Renneberg is alive and well, living in the Blue Mountains and as keen as any 76-year-old to tune into the first match of the Australia-India series beginning Thursday at the same venue where his game in the international arena reached its greatest height.

"I'm just interested to see how [Virat] Kohli goes. One of the Aussies reckoned he wouldn't get 100. I wouldn't mind having a quid on that," Renneberg said on Wednesday. 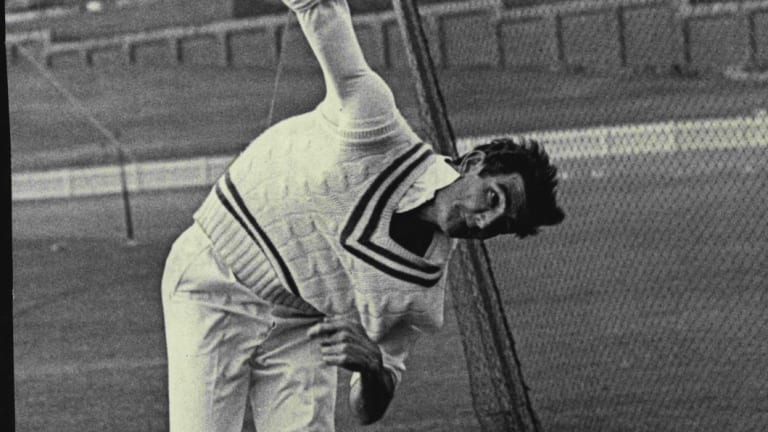 David Renneberg in the nets in 1968.Credit:Fairfax Media

Renneberg took 5-39  from 86 balls in the second innings of the first Test of the 1967-68 tour, grabbing the first four wickets to fall to bowlers (Indian opening batsman Farokh Engineer was run out) and the final wicket to give Australia a 1-0 series lead.

Ray Lindwall, Craig McDermott, Damien Fleming and Peter Siddle are the only other Australian quicks to have taken five-for in a Test against India in Adelaide.

"The Indian batsmen weren't anywhere near as good as they are now, of course, and they played a few false shots and I was lucky enough to take five," Renneberg said.

"They just struggled with our conditions. There wasn't a great deal of bounce in Adelaide but there was more than they got in India."

Australia won every match of the four-Test series, only the second time India had toured Australia. The first tour was in 1947-48 when Australia  won the five-match series 4-0.

According to Renneberg the two teams got on well, with the Indians most competitive in the third Test when Renneberg's fast-bowling compatriot Graham McKenzie was inexplicably left out of the team.

There was, Renneberg notes, no sledging and no-one even contemplated needing to use someone else to fire them up.

"You're representing Australia, you just bloody did it," Renneberg said.

"The competition was pretty hard."

India would not be back on Australian soil for another decade with the 1978 tour starting against the backdrop of World Series Cricket. The depleted home team, with Bob Simpson coming out of retirement, got over the line 3-2.

That was the closest India has come at winning at series in Australia in 11 attempts.

Renneberg will be taking a peek to see how it all unfolds, recalling his day in the sun in modest fashion.

"It was a terrific day and something I will always remember."