The gold medal favourite tag for men’s hockey is starting to sit comfortably with Australia after the Kookaburras continued an unbeaten start to the Olympic tournament with a 5-2 victory against Argentina on Tuesday.

It was another dominant display from Australia, despite falling behind to an early penalty corner strike by Argentina. The Kookaburras stayed composed and took control and, more importantly, converted pressure onto the scoresheet with their penalty corner set-up particularly ruthless, which would please coach Colin Batch. 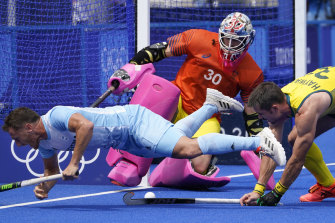 Australia scored from each of penalty corner series as Blake Govers put another double on the board and Jeremy Hayward converted in the third quarter to secure victory after the Kookaburras had led 4-1 at halftime.

What would have the European powers nervous is the Kookaburras’ fast, aggressive passing game appears to be getting better with every outing.

“We’ve still got two games to go [in the pool stage] so we’ve got a lot of improvement to do and a lot to work on, so that’s pleasing for us,” Govers said.

“I think it’s just [about] playing our own game for longer periods of time. When we’re at our best we’re pretty confident so we just need to play longer minutes at our best.”

Australia have lacked international competition for the past couple of years, but have scored 17 goals in their three wins and every facet of their game appears to be purring.

While putting a big score on the board, as they did against Japan and India, Australia were hardly tested in defence against Argentina, who didn’t have a shot in the second and third quarters.

The South Americans spent much of the match chasing the ball as the Kookaburras moved it with speed and precision.

The match had started on a sodden pitch and Jose Tolini took advantage of an early penalty corner to give Argentina the lead but, as the game went on and the pitch dried, the Kookaburras were dominant.

It took Australia until the final minute of the first quarter to have a shot, but it counted as Govers converted the second in a series of penalty corners to put his side level at the first break.

As the pitch sped up in the second quarter, the Kookaburras were able to use their fast ball movement to pick holes in the Argentine defence, which was forced further and further back into its own half.

Tom Wickham gave Australia the lead knocking in a cross from Tim Brand, who had found the backline from close range on his reverse stick in the 21st minute.

From there Australia put Argentina under intense pressure for much of the second quarter and Govers made it 3-1 from a penalty corner three minutes later.

Kookaburra Lachie Sharp scored one of the team goals of the Olympics to make it 4-1. The Australian’s swift ball found Wickham on the backline on the left, who bunted it back to the 45-degree angle where Sharp met it and swept it first time high into the net.

“To get on the score sheet in any game’s a nice feeling,” Sharp said. “If you get to the right spot and have good connections with the blokes around you you’re bound to get a goal, so it’s nice.”

Australia maintained control in the second half and had 24 circle entries to only seven from Argentina, who got a late consolation goal from Maico Casella Schuth.

The Kookaburras face New Zealand on Wednesday night, where a win or draw will secure them the top seed from pool B in the quarter-finals.