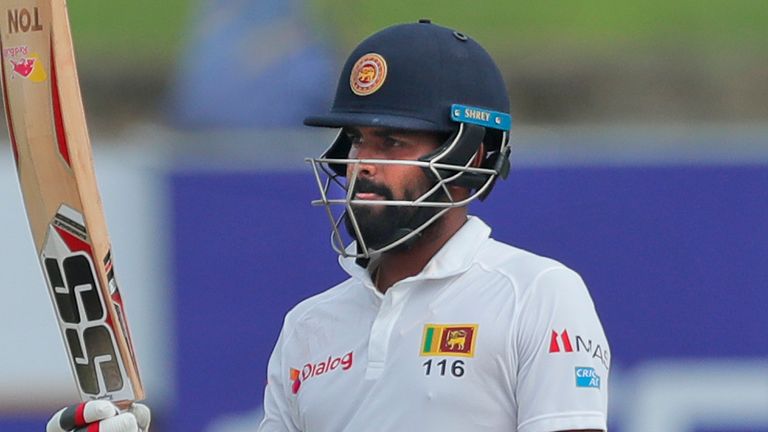 Lahiru Thirimanne led a Sri Lanka fightback on day two of the second Test against the West Indies in Antigua, scoring 55 to help the visitors close the day 136-3, trailing by 218 in their first innings.

Sri Lanka dismissed the West Indies for 354 by lunch, with captain Kraigg Brathwaite (126) completing his century and number nine batsman Rahkeem Cornwall firing 73 from 92 balls as the home side added 67 runs to their overnight total.

Brathwaite needed just two balls on the second morning to bring up a ninth Test century, while Cornwall reached his half century soon after before their century stand was broken as he lofted a Suranga Lakmal (4-94) delivery to mid-off.

Kemar Roach (9) hung around for 36 balls with his skipper before falling to Dushmantha Chameera (3-69), who then bowled Brathwaite in his next over to end the West Indies innings.

In reply, Sri Lanka lost captain Dimuth Karunaratne in the ninth over to a stunning one handed catch at third slip by Nkrumah Bonner off Alzarri Joseph (1-31).

Oshada Fernando (18) departed soon after tea when he was trapped lbw by Kyle Mayers (1-6), and though Thirimanne brought up a ninth half century in Tests, he ultimately fell five runs later when inside-edging a Roach (1-39) delivery onto his stumps.

Dinesh Chandimal (34) and Dhananjaya de Silva (23) rebuilt, putting on 59 together in an unbroken stand for the fourth wicket as Sri Lanka safely negotiated their way to stumps without further loss.

The first Test of the two-match series between the teams ended in a draw.