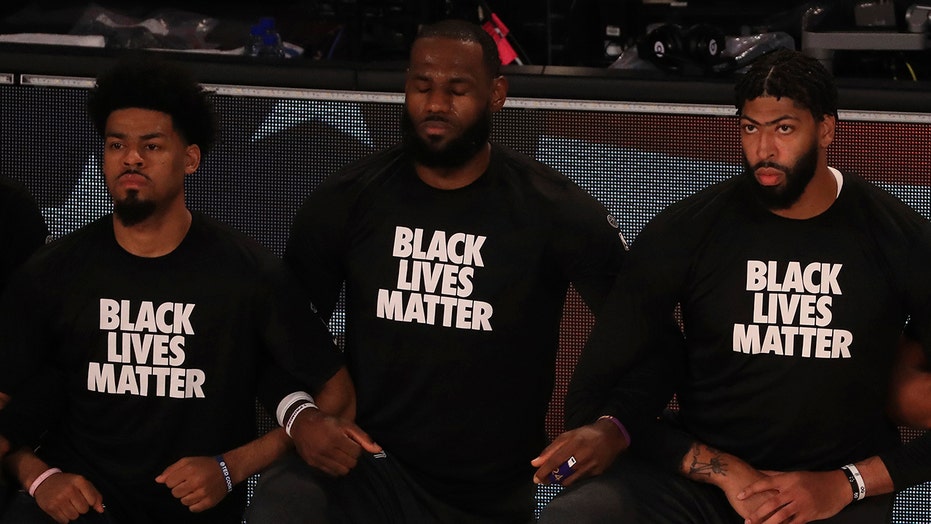 President Donald Trump did not mince words when discussing his feelings about NFL and NBA athletes taking a knee during the National Anthem.

LeBron James was ready to make his first playoff appearance in a Los Angeles Lakers uniform on Tuesday night. But before he suited up in the team’s purple and gold colors, the NBA superstar wore a shirt and hat in an attempt to send a powerful message.

His hat was a parody of President Trump’s “Make America Great Again” motto from his first presidential campaign, but instead it read, “Make America Arrest The Cops Who Killed Breonna Taylor.”

"By Any Means‼️ Lets Get It #JusticeForBreonnaTaylor," James wrote on his Instagram page.

This wasn’t the first time James took a shot at Trump. He once referred to him as a “bum” after Trump criticized Golden State Warriors star Steph Curry when he declined an invite to the White House.

"Going to White House was a great honor until you showed up," LeBron tweeted at Trump at the time.

The Lakers, the No. 1 seed in the Western Conference, were set to square off against the eighth-seeded Portland Trail Blazers in the opening round of the NBA playoffs. The Lakers went 3-5 in the remaining eight regular-season games, and came away with victories over the Los Angeles Clippers, Utah Jazz, and Denver Nuggets.

Fellow superstar Anthony Davis finished the regular season averaging a team-high 26.1 points, 9.3 rebounds, 2.3 blocks, and 1.3 steals, and James added 25.3 points, a career-best 10.2 assists, and 7.8 rebounds per game. Both players will need to continue to carry the load for the Lakers if they want to make a deep playoff run.