My dear old things, it was the greatest cricket match of all time: Legendary commentator HENRY BLOFELD on a day of high drama at Lord’s

What drama, what tension, what heroics. My dear old things, in all my years of watching cricket, I cannot recall any match that has kept me on my toes like yesterday’s World Cup Final.

In fact, I have never seen anything so compelling on television in my life. Wasn’t it amazing?

It is a glorious achievement to gladden the heart and bring a tear to the eye. The cheers that rang out at Lord’s yesterday echoed across the nation as the England cricket team, after decades of heartache and frustration, finally reached the summit. 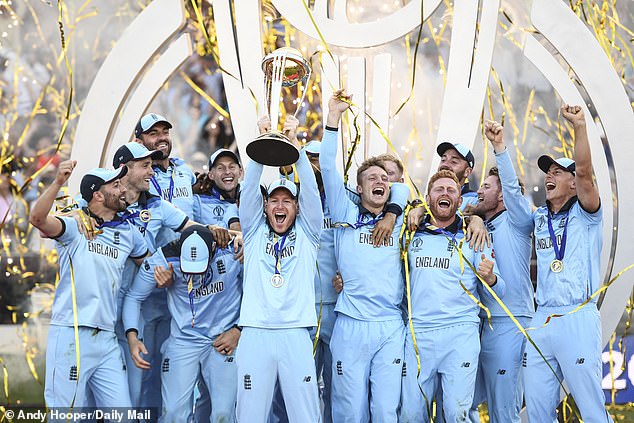 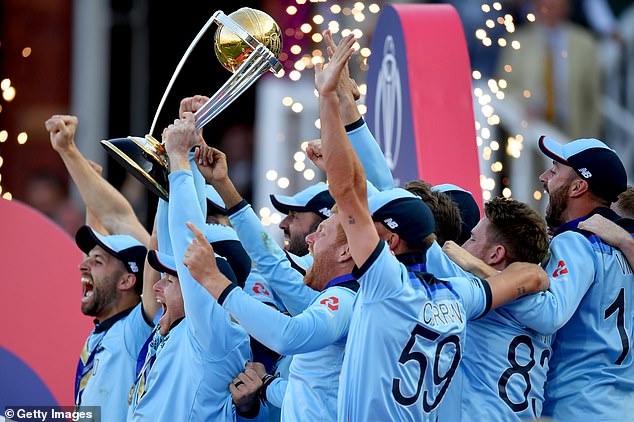 The triumph was all the more emotional because it was such a close finish. My wife and I watched it at home in Norfolk with a bottle of very decent burgundy. It became so tense, we felt the need to open another.

I felt for New Zealand, truly. Their undaunted spirit, their sense of decency even after they lost by that wafer-thin margin was an absolute tonic and very much in the spirit of the game.

Of course it was marvellous for England and, goodness knows, they deserve their congratulations. Irishman Eoin Morgan’s side, who somehow kept their heads when, to quote Kipling, most spectators were losing theirs. England have had great Irish leaders in the past.

The Duke of Wellington, hero of Waterloo, was born in Dublin, while Field Marshal Montgomery was of Ulster stock. It was Eoin Morgan’s leadership that galvanized his team and turned them into all-conquering heroes.

Cricket has been something of a marginalised sport in recent years, with a shrinking public following.But this spectacular advertisement will have gripped the public’s imagination. Parks and gardens will be full of youngsters this summer imitating Ben Stokes with the bat and Jofra Archer with the ball. 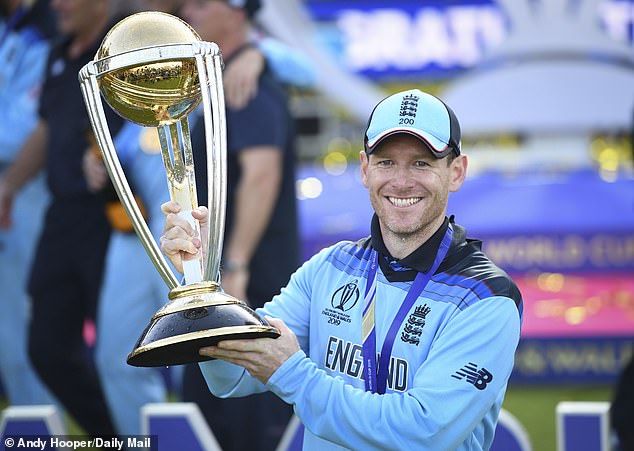 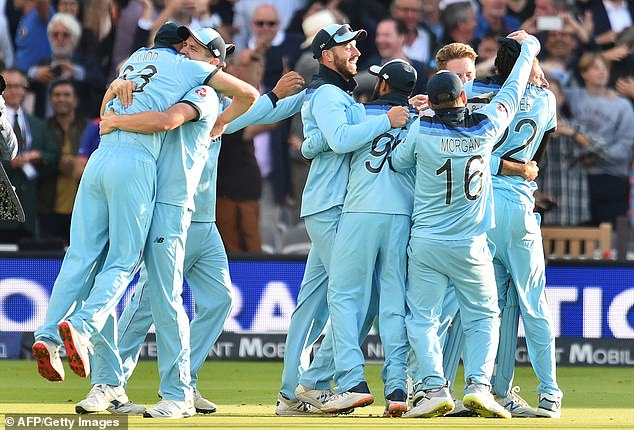 The triumph ranks with any of the great milestones of English cricket, including the pulsating Ashes series of 2005, some of whose Test victories were almost as close as yesterday’s final.

And how could we forget Ian Botham’s Ashes of 1981, when dear old Beefy, then in his invincible pomp, thrashed the Aussies. Mind you, Ian was not the only cricketer who could be dismissive of the Australians. The Zimbabwean Eddo Brandes, never the most slimline of fellows, once came in to bat against the men from Down Under, only to be greeted by one of the Aussies with the question: ‘Hey Eddo, how come you’re so fat?’ Without missing a beat, Brandes replied: ‘Because every time I sleep with your wife, she gives me a chocolate biscuit.’

Beyond cricket, yesterday’s World Cup triumph is up there with the great landmarks in our sporting heritage that have mesmerised the nation.

But the closest parallels are with our other national team sports, notably the Rugby World Cup win of 2003 and the even more resounding football victory of 1966 at Wembley, inspired by Geoff Hurst’s hat-trick.

Alf Ramsey, the manager of the 1966 squad, was awarded a knighthood after the defeat of West Germany, while the skipper Bobby Moore was given the OBE. Captain Morgan must be in line for a gong after yesterday’s drama.

He will certainly be greeted with greater acclaim than the unfortunate England skipper Mike Denness, whose Ashes team of 1974-75 was obliterated by Aussie firepower. 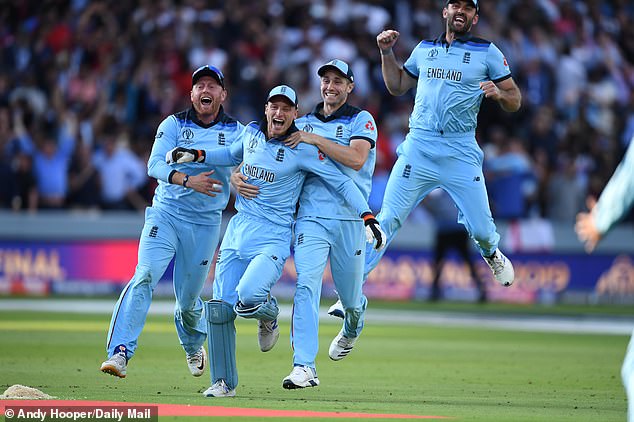 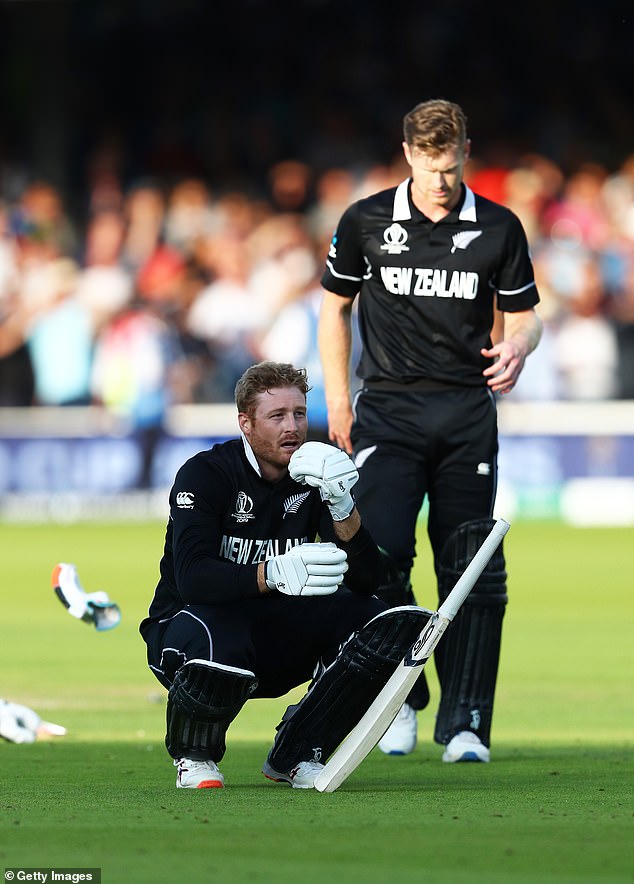 After Denness arrived back home, he received a strange envelope one morning, simply addressed to ‘Mike Denness, cricketer’. No address, no house name nor postcode. Inside, was a briefly worded message: ‘Dear Mr Denness, If this letter ever reaches you, the Post Office thinks an awful lot more of you than I do.’ At a time of political crisis, this victory will be a huge shot on the arm for the nation. There is nothing like a high-octane triumph to fuel a mood of patriotism. The triumph of Morgan’s men has a very modern feel. Compared to the way cricket was played when I first turned out for Cambridge University in the late 1950s, the sport now is far more aggressive and fast-paced. Batting is less defensive, fielding far more dynamic.

The late American comedian Robin Williams once said ‘cricket is baseball on Valium’ but it would be absurd to make such a remark today about the one-day game.

In a further sense, the victorious England team is very modern because it closely mirrors the diverse nature of modern British society. Fast bowler Jofra Archer, some of whose express deliveries in the tournament reached 95mph, was born in Barbados, while magical leg spinner Adil Rashid hails from a Bradford family of Pakistani migrants.

Morgan himself, brought up on a council estate north of Dublin, is of mixed parentage, with an Irish father and English mother. A cricket prodigy in his youth, he decided he wanted to play for England when he was just 13.

Yesterday’s win reinforces the game’s place at the centre of our national identity and story. Whatever cynics think, cricket is synonymous with the English character and what it means to be English. As the great writer Neville Cardus once put it: ‘There can be no summer in this land without cricket.’

Inevitably, the very English trait of humour is bound up with cricket, never demonstrated to more hilarious effect than in the episode during a Test in 1991 when my old pal Brian Johnston was gripped by a fit of the giggles after his colleague Jonathan Agnew described how Ian Botham lost his wicket because ‘he couldn’t quite get his leg over’.

In 1882, when Australia beat England by just seven runs at the Oval one spectator was so excited that he chewed through the handle of his umbrella. Yesterday’s final was more captivating. People who never watched the game before are now hooked. The dear old sport I love may be about to undergo a revival.