Coach Justin Langer has declared Nathan Lyon is bowling as well as he has ever seen as the master spinner struck the right speed to tame the world's premier strokemaker, Virat Kohli, among his six-wicket haul.

As great as Kohli is, the Indian skipper has lost his mojo against the Australians, having managed only 129 runs at 16.1 in his past eight Test innings, compared to 687 runs at 85.8 in his previous eight. 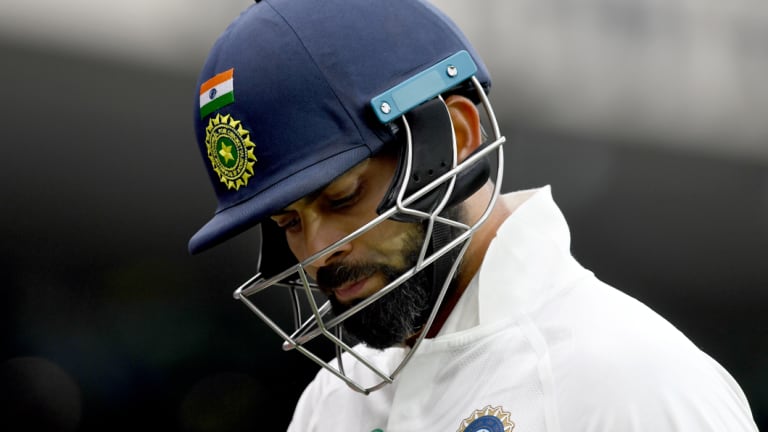 His run of woe began in the second innings of the Sydney Test of 2015 when he made 46 – his top score against Australia in the period since, including last year's series in India.

On an Adelaide pitch that has been slower than expected, Kohli was dismissed for three off 16 balls on Thursday, and for 34 off 104 balls on Saturday when he was caught at short leg by Aaron Finch off Lyon. Saturday's innings was a historic one for Kohli – never had he scored at a slower rate in an innings of 30 or more and never had he played fewer attacking shots in an innings of at least 50 balls (9.6 per cent of shots were attacking), according to CricViz.

That, in part, was due to the tricky pitch and the tight circumstances of a game that was in the balance at the time, but also the pressure exerted by the Australian attack.

Lyon, initially criticised by Shane Warne for his tactics, was instrumental in this, prompting Langer to declare: "Nathan Lyon is bowling as well as I have ever seen."

Statistical analysis shows that while Kohli averages an imposing 55.75 runs per dismissal against off-spin, that can be dependent on the pace of the deliveries. His average against balls faster than 88km per hour is only 29.77 compared to 64.4 against slower deliveries – a statistic the Australians surely knew about.

The delivery that dismissed Kohli was 89.3km per hour, leaving Kohli with much to think about heading into this week's second Test in Perth.

Australia's greatest off-spinner is at the peak of his powers, whether that be extracting off and top spin or dangerous dip while at the same time maintaining control to build pressure. The latter was particularly important in this Test, for he had to toil diligently from the River Torrens end so Tim Paine could rotate the fast bowlers from the other without having all-rounder Mitch Marsh to provide some relieving overs.

While the runs began to leak on Sunday, bowling coach David Saker was delighted with how his bowlers had taken to Kohli a day earlier. 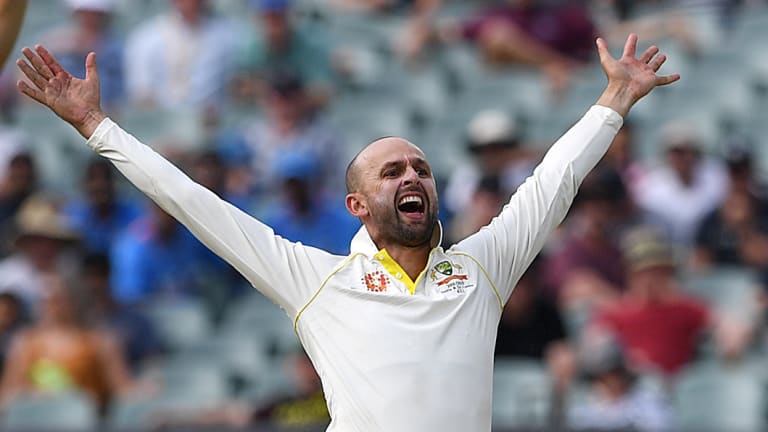 "He [Kohli] batted really patiently, for him. He usually likes the game moving forward. Every ounce of us wanted him out," he said.

One theory to unsettle Kohli heading into this series was to play on his ego, for the strokemaker enjoys entertaining – and that comes from scoring runs.

If the Australians can maintain a tight line to him, that will build pressure on Kohli – and the Indian top order overall. Lyon shapes as the man to do that, regardless of the conditions on offer.

He has dismissed Kohli six times – no bowler has done so more, having eclipsed English quicks James Anderson and Stuart Broad. He has delivered 593 balls to Kohli in Tests, the most of any bowler, and has taken his wicket every 55.1 deliveries.

"It's always a great challenge coming up against the greats of the game and Virat's definitely that," Lyon said on Fox Cricket.

"I actually felt I was going to get him caught bat-pad or even bowled through the gate."

There has also been a tweaking of tactics, and this helped in Lyon finishing with 6-122 – his sixth five-wicket haul against India – off a marathon 42 overs.

Lyon prefers to have his close catchers on the on-side, in the hope there will be a mis-hit drive. However, Saker says Lyon needs to also consider regularly having a silly point or short cover, for padding up is then more dangerous because judging how much the ball will spin is tougher, and can contribute to having a batsman caught or trapped lbw.

"It might be an idea to use it more. It messes up the batsman's feet a bit. Nathan is more comfortable with catchers on the leg side," Saker said before play.

"Tactically, we need to be really good about those things."

That the Australians were when Lyon, with a flat and faster delivery, adjusted to this change and had Rohit Sharma caught at silly mid off by Peter Handscomb before lunch on Sunday.

Lyon, enjoying average spin of 5.33 degrees, the most he has in home Tests over the past two years, found himself on a hat-trick after the break when he had Ajinkya Rahane caught off a reverse sweep and Mohammed Shami snapped up in the deep. While the milestone ball was subdued, it was further evidence how important the former Adelaide Oval greenkeeper will be during the four-Test campaign.