The league made a 10-year commitment to the Players Alliance that includes $10 million a year, plus an additional $5 million in matching contributions. 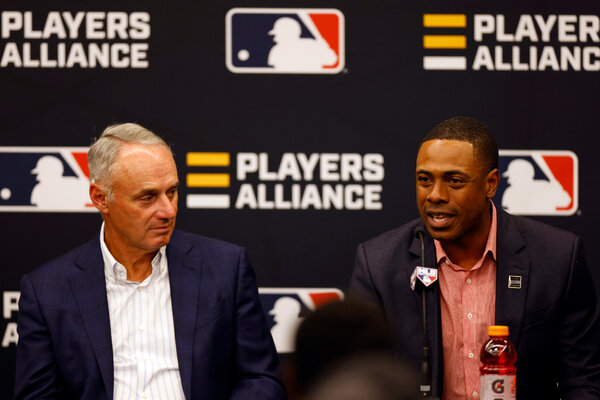 Major League Baseball announced on Monday that it will donate up to $150 million to the Players Alliance, a nonprofit formed last summer by more than 100 Black current and former players in the wake of George Floyd’s death. The donation is aimed at helping build Black participation in the sport.

“This represents the largest financial commitment in M.L.B. history toward the specific goal of improving Black diversity in the sport on the field, in managerial & coaching positions, and front office leadership,” the league said in a statement on Monday night following an announcement by Commissioner Rob Manfred at Coors Field in Denver, the site of the All-Star Game.

The league, which joined forces with the players’ union to pledge $10 million to the fledgling nonprofit last summer, said it would begin its new financial commitment in 2023 with $10 million annually for 10 years, plus an additional $5 million in matching contributions to the Players Alliance’s fund-raising.

“We believe in the mission of the Players Alliance and have been inspired by the passion and perspectives of the players who are leading this effort,” Manfred said in the statement. “We know that our sport is at its best when it is accessible to everyone. Together, we will make this a reality with innovative and collaborative programs.”

The rate of Black players in the major leagues has dwindled from a high of around 19 percent in the early 1980s to about 8 percent now. This season, there are only two Black American managers — Dusty Baker of the Houston Astros and Dave Roberts of the Los Angeles Dodgers — and just one overseeing a baseball operations department — Kenny Williams of the Chicago White Sox.

The idea for the Players Alliance came last summer when Cameron Maybin, a veteran outfielder now in the Mets organization, saw a video of N.F.L. players saying, “Black lives matter,” and listing victims of police brutality, including Floyd. (The majority of players in the N.F.L. are Black.)

Realizing that little had been said within baseball on the same topics, Maybin reached out to other Black players and, soon, they formed a group where they could talk and organize charitable efforts. The former M.L.B. stars Curtis Granderson, C.C. Sabathia and Edwin Jackson lead the nonprofit.

The group began a mentoring program for newly drafted Black players. They held clinics and donated equipment throughout the country. They raised money during the annual Jackie Robinson Day. They spoke with Manfred when he asked about the 2021 All-Star Game, which was originally supposed to be held in Atlanta but he moved the festivities to Denver because of Georgia voting laws that critics viewed as discriminatory.

Granderson, the president of the Players Alliance and a former outfielder whose 16-year career included stints with the Detroit Tigers, the Yankees and the Mets, thanked Manfred and club owners for their help on Monday. The funding, M.L.B. said, would go toward the Players Alliance’s initiatives, and the nonprofit would also help the league with its youth programs.

“Major League Baseball’s commitment to support the Players Alliance is a monumental turning point in the history of our game, establishing a pathway to progress for equity and access for the Black community,” Granderson said in a league-issued statement.