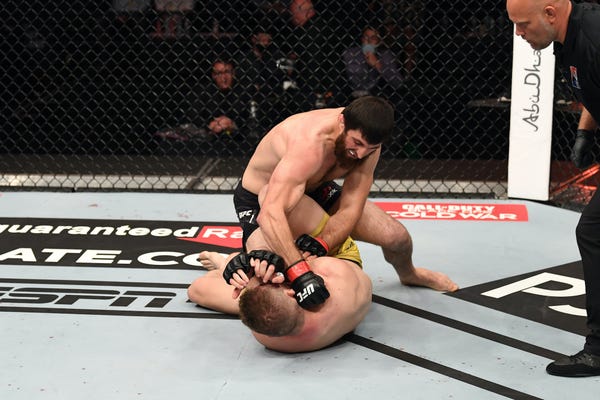 FIGHT ISLAND — Magomed Ankalaev knocked his UFC opponent down and then hit him seven more times when he was on the ground.

A 28-year-old from Dagestan, Ankalaev is developing a formidable reputation as a fearsome competitor in the 205-pound weight class.

Though he lost his UFC debut in 2018, a triangle choke submission defeat to Paul Craig, Ankalaev has since rebounded with venom by beating his next four opponents — three of those by knockout.

And it was his most recent knockout win, struck at UFC 254 on Saturday in Abu Dhabi, which is perhaps the scariest of his entire career.

Ankalaev had the fight pretty much finished when he sent a heavy right hand over the top, landing so heavily on Cutelaba's jaw that the Romanian could only crumple to the floor in a heap.

But then Ankalaev pounced with a load of hammer fists, seemingly separated Cutelaba from his senses with a sixth shot in the merciless sequence, and then the referee had to removed him from his opponent after he landed a seventh brutal shot from the top.

It was a particularly violent ending to the light heavyweight match on Fight Island.

And you can watch it here: