The Collingwood Magpies have claimed bragging rights over their cross-town rivals, recording an impressive 70-60 win over a depleted and previously table-topping Melbourne Vixens side at John Cain Arena on Sunday evening.

The Vixens were stretched even before the opening pass, with defender Kate Eddy and midcourter Hannah Mundy forced to miss the match due to COVID-19 protocols. Goaler Rahni Samason was also ruled out of the action on Friday due to a knee injury. 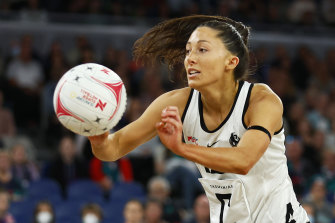 Magpies midcourter Molly Jovic has been instrumental as Collingwood continued to turn their season around.Credit:Getty Images

The Magpies seized their opportunity, winning each quarter to record a comfortable 10-goal victory, putting them into finals contention after sitting on the bottom of the ladder only two rounds ago.

Although centre Kate Moloney returned from COVID-19 protocols to help cause several deflections to stymy Collingwood’s transition to attack, the Magpies started stronger.

Goal-shooter Shimona Nelson missed a couple of goals early, but found her feet and helped the Magpies take a four-goal lead into the first break. Nelson finished with 48 goals from 51 attempts in a dominating performance.

The midcourt combination of the ever-reliable Kelsey Browne and in-form Molly Jovic were also formidable, racking up 40 goal assists between them for the match.

Yet the Vixens started to fight back after a timeout early in the second quarter. Diamonds captain Liz Watson led the way, tallying 47 feeds and 28 goal assists in the match. Goal-attack Kiera Austin worked her way into the game and provided a good centre-pass target, receiving 12 at the main break.

However, Melbourne goal-shooter Mwai Kumwenda struggled at times as the Vixens shot a low percentage and failed to take full advantage of their new-found momentum. A Magpies timeout turned the tide, with Nelson taking full advantage, combining with substitute goal-attack Gabrielle Sinclair, who finished with 18 goal assists.

In the second half, Collingwood did not let the traditional Melbourne powerhouse get close. Defender Jodi-Ann Ward stepped up alongside the continued hard work of Browne, who finished as the player of the match.

A late flurry of two-point attempts from the Vixens couldn’t deny the Magpies, who pulled off their biggest win of the season.

Vixens coach Simone McKinnis said her side struggled to match the fast-starting Magpies.

“I don’t think that we started with the intensity that we needed to, and then it’s hard playing catch-up [to] build that intensity out there on-court,” she said.