LOOK on the bright side Pep…at least that bubbly will be well chilled when you finally get to open it.

It’s been in the fridge for over a week now, and in all honesty the cork rarely looked like coming off last night either. 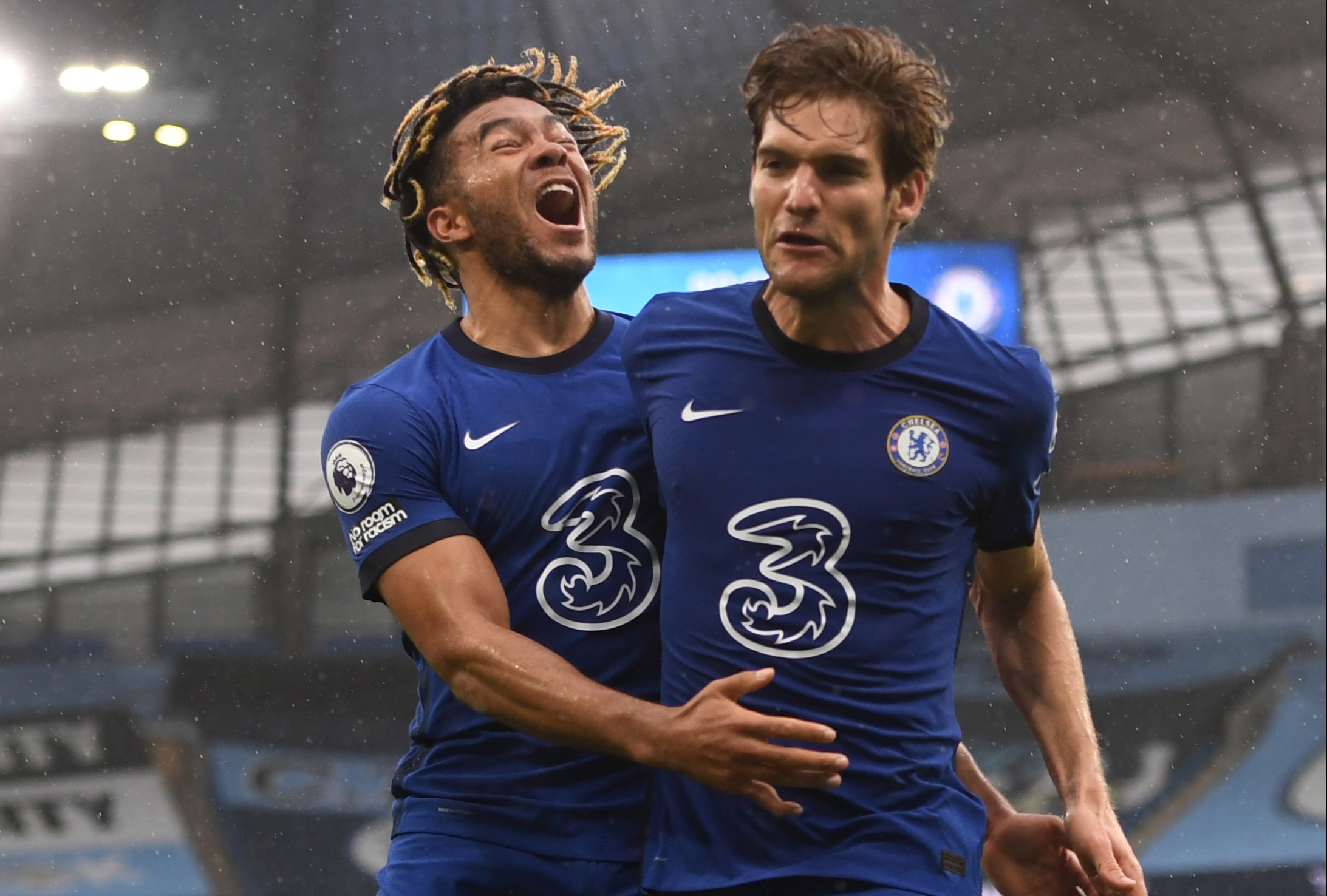 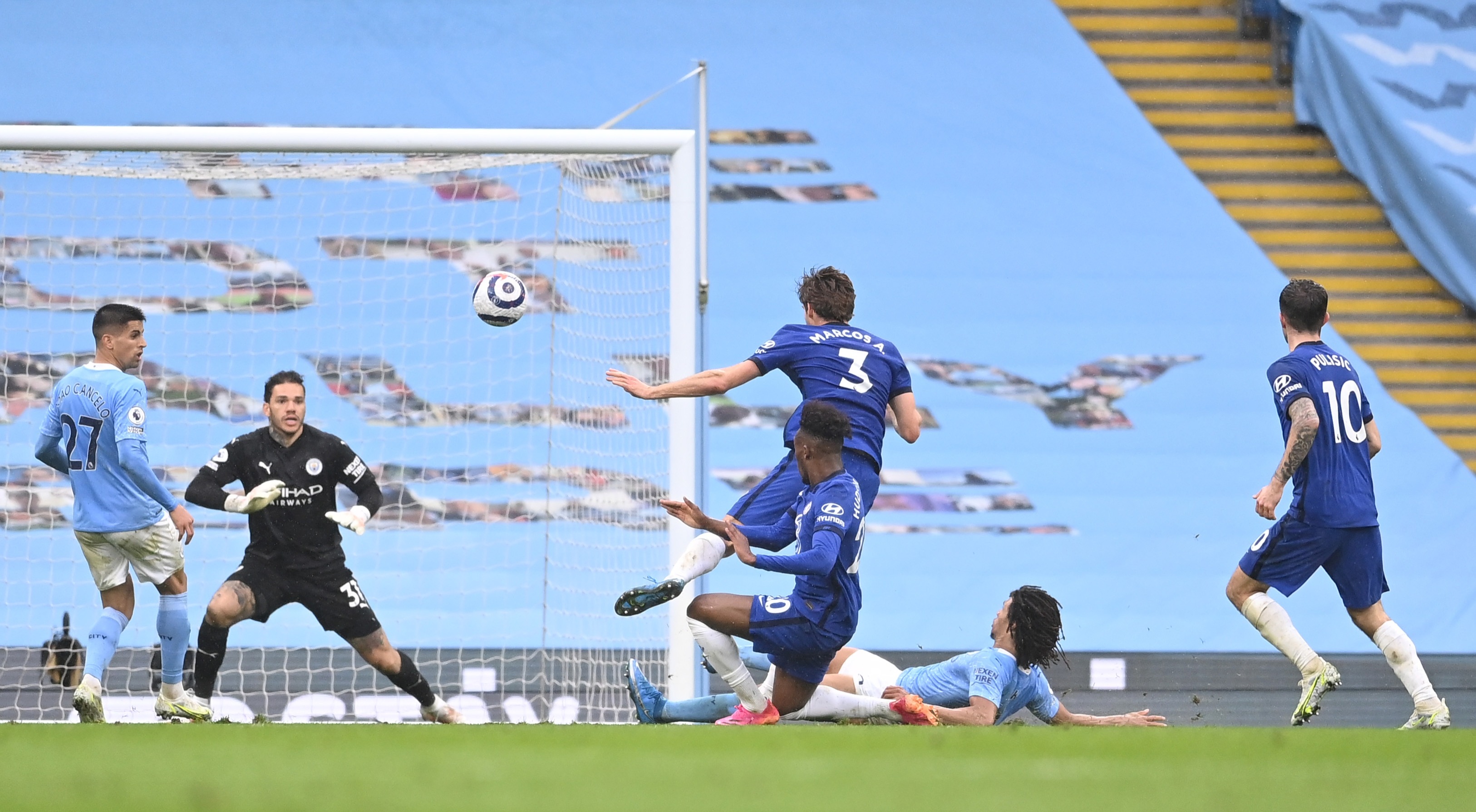 Admittedly it is only delaying the inevitable and by the time City play again at Newcastle on Friday, they could already be champions.

But when you’re a perfectionist like Guardiola, that will be no real consolation.

One goal up, a comedy penalty miss, then goals from Hakim Ziyech and Marcos Alonso to give you an even bigger slap in the chops.

In terms of laying down a Champions League final marker, it doesn’t come bigger or better than leaving the Etihad as winners – and Chelsea did just that.

And after dumping City from the FA Cup semi-final a month ago, Tuchel clearly won’t be fretting at the thought of taking on Pep again for the title of European kings.

City can have no complaints that they could now be crowned champs in front of their tellies, either, if United slip up against Leicester or Liverpool in midweek.

They can’t blame anyone but themselves that there will be no satisfaction of clinching the Premier League through a performance of their own.

Mind you, when they DO get to plonk the crown on their heads for a third time in four years, all that will probably be forgotten. 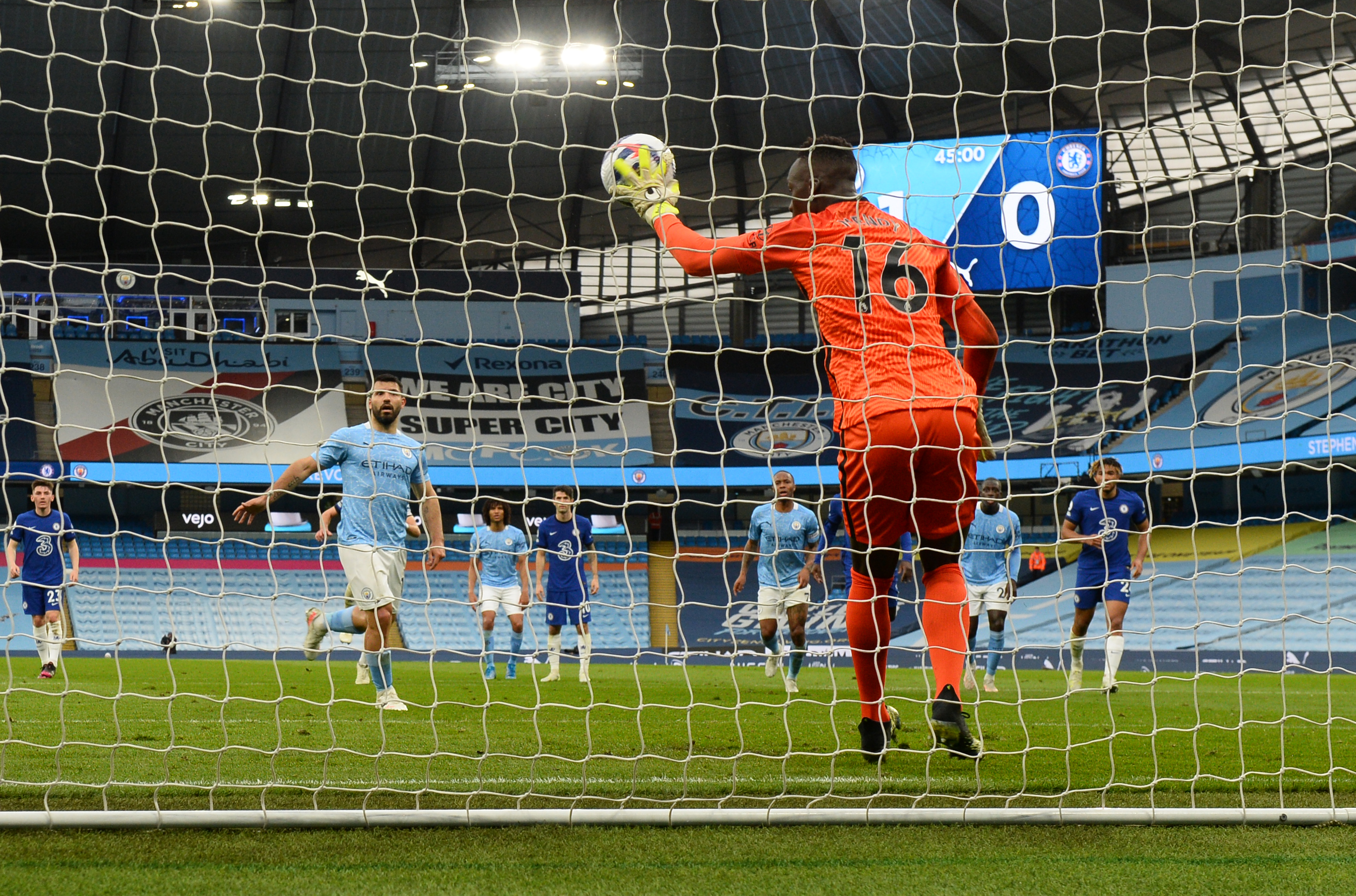 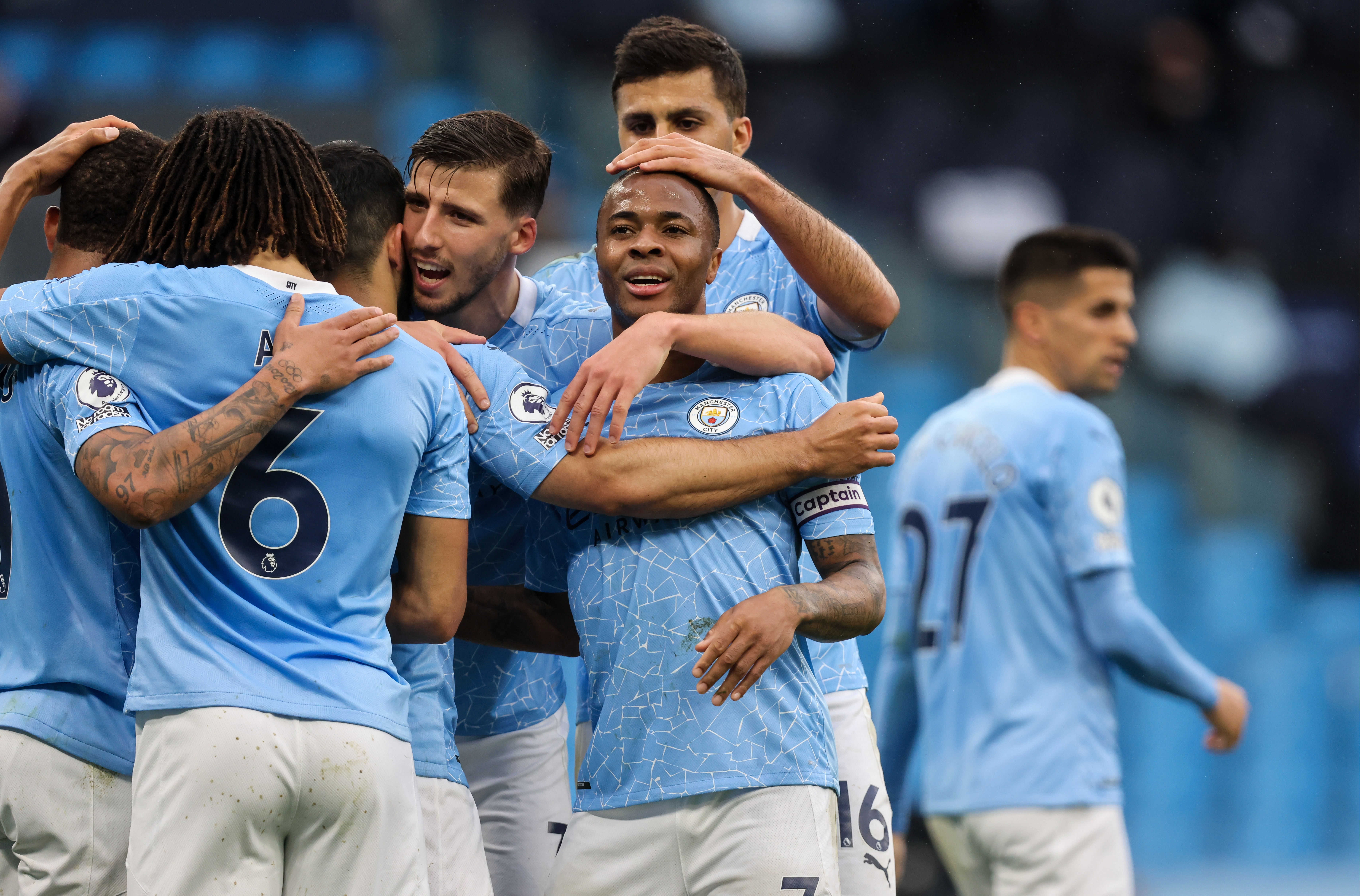 What won’t, certainly not by their manager, is how they huffed and puffed against Tuchel’s men last night. How they committed soccer suicide on their own patch.

And you can be sure Pep will be warning every single man in sky blue that if they don’t up their game when these two face off in Istanbul, they can forget that European crown.

How ironic that City, the team which is in a different league to every other one in the land, was so leaden-footed and lethargic here.

How ironic that the team which leaves opponents needing sickness tablets, so often are they left in a spin, were so shoddy and slapdash.

How fittingly ironic, too, that when City did finally find a way to score – and you didn’t fancy them to at all up for nearly 45 minutes – it was a goal made from scraps rather than silk. 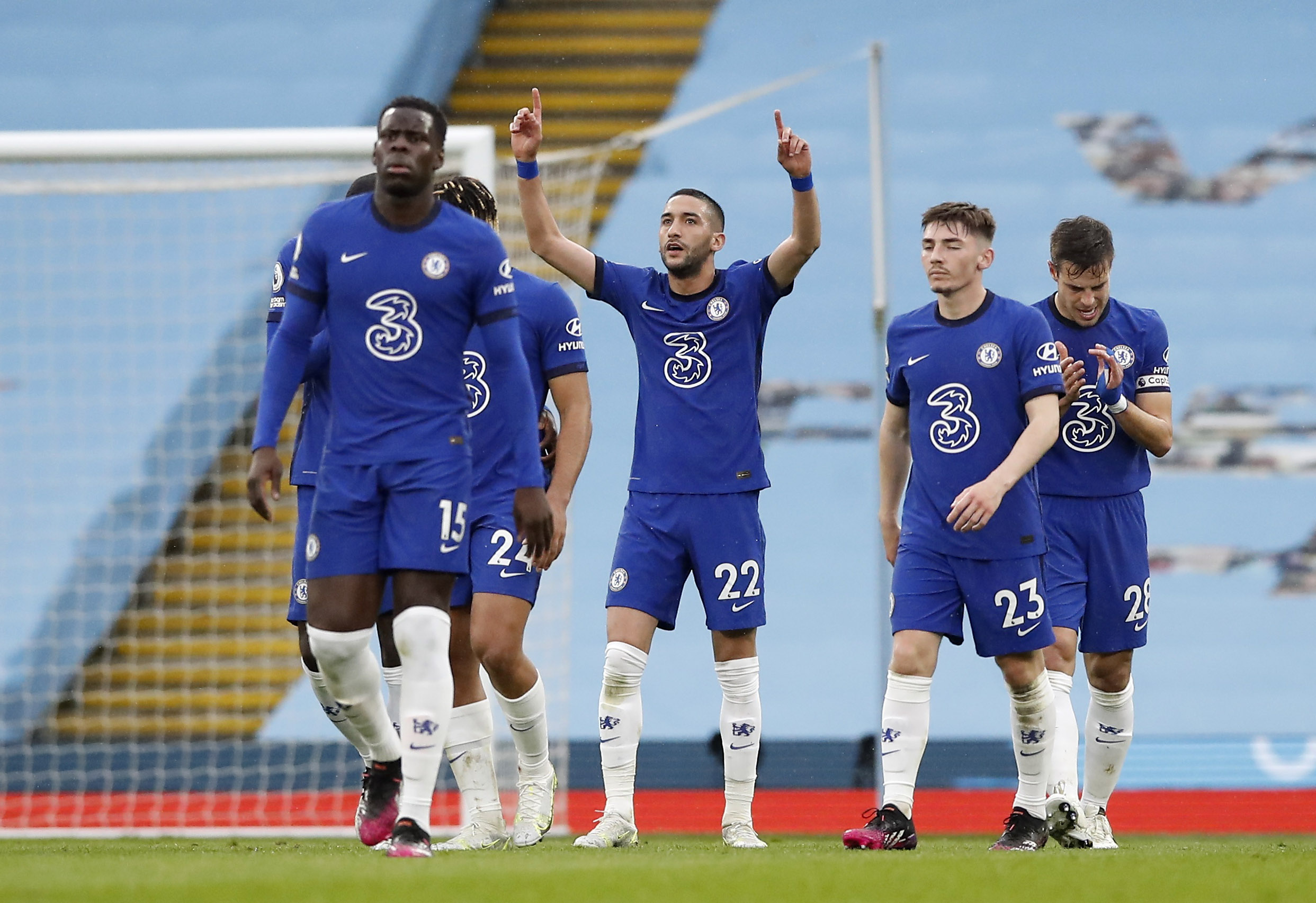 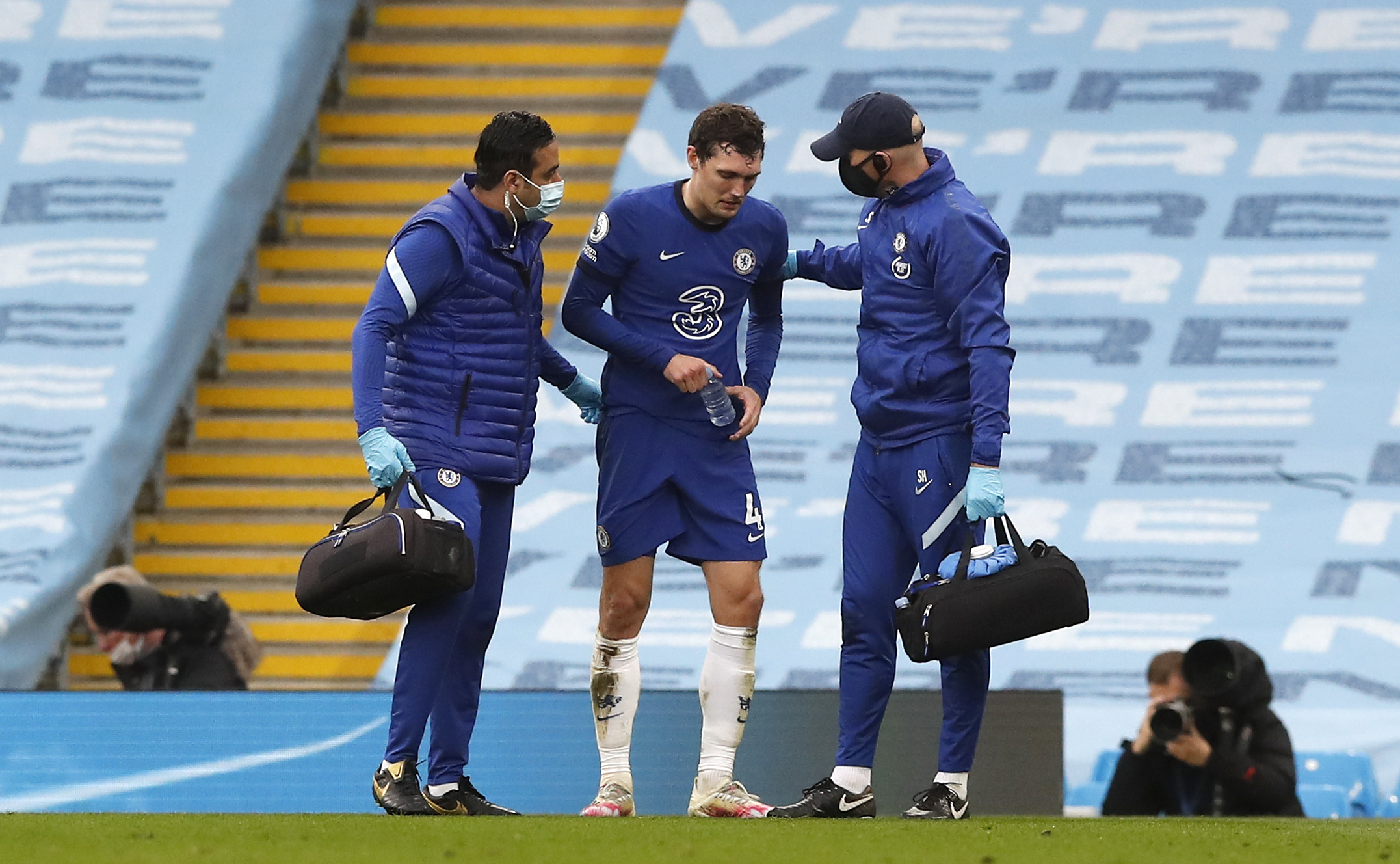 It came as half time approached, and it came after the most appalling of first touches from their all-time leading scorer Sergio Aguero.

Gabriel Jesus got in behind Andreas Christensen down the right and when he picked out Aguero six yards or so out, it was a goal for all money.

Only it wasn’t. The Argentine, the man second only to Wayne Rooney in Premier League goals for a single club, saw it bobbly off his foot and away from the target.

Thank Heavens, then, that Raheem Sterling at least was alive to it, because he stormed in and buried it with his left foot.

For Sterling there was plenty of relief amidst the joy, getting back on the scoresheet for the first time since February. 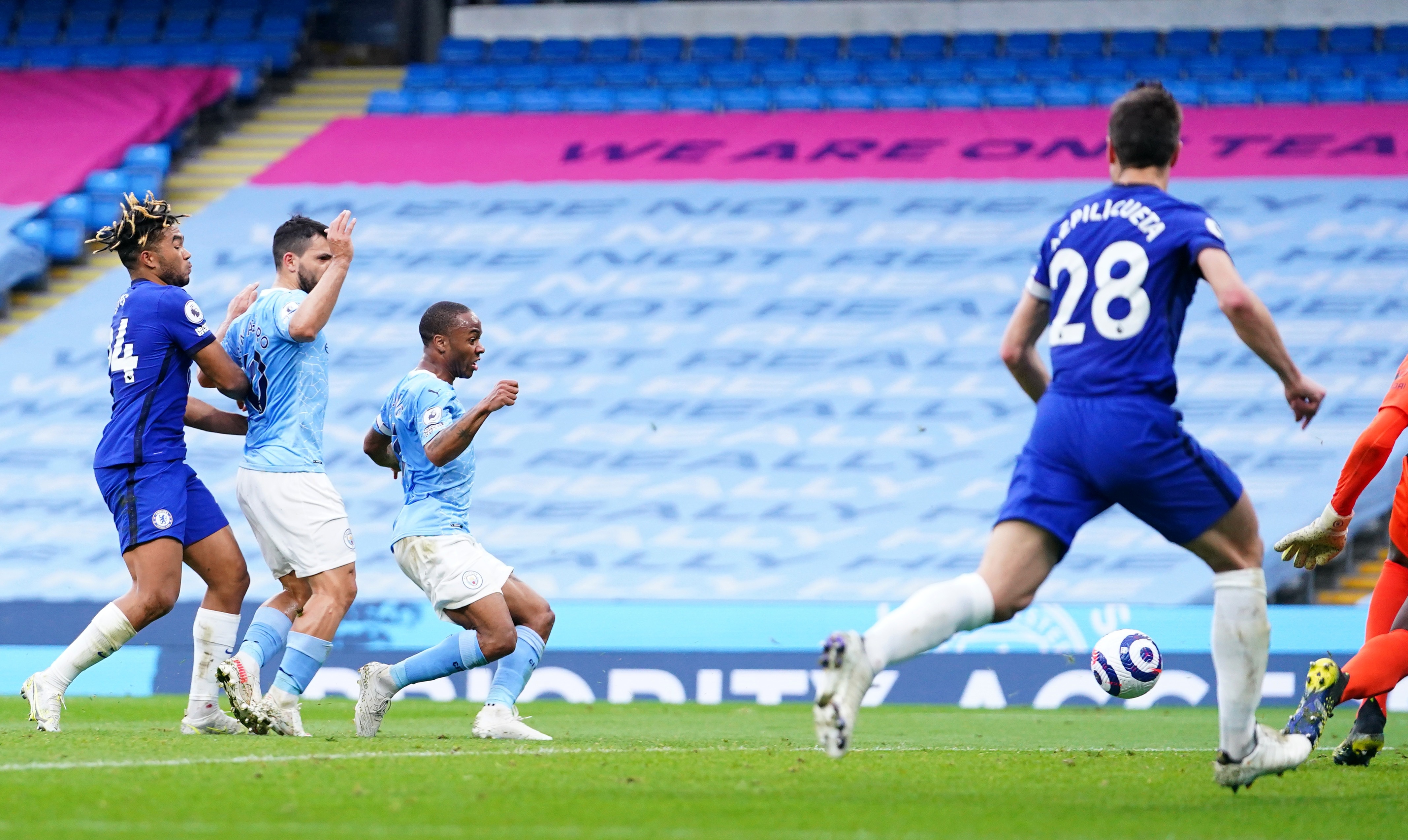 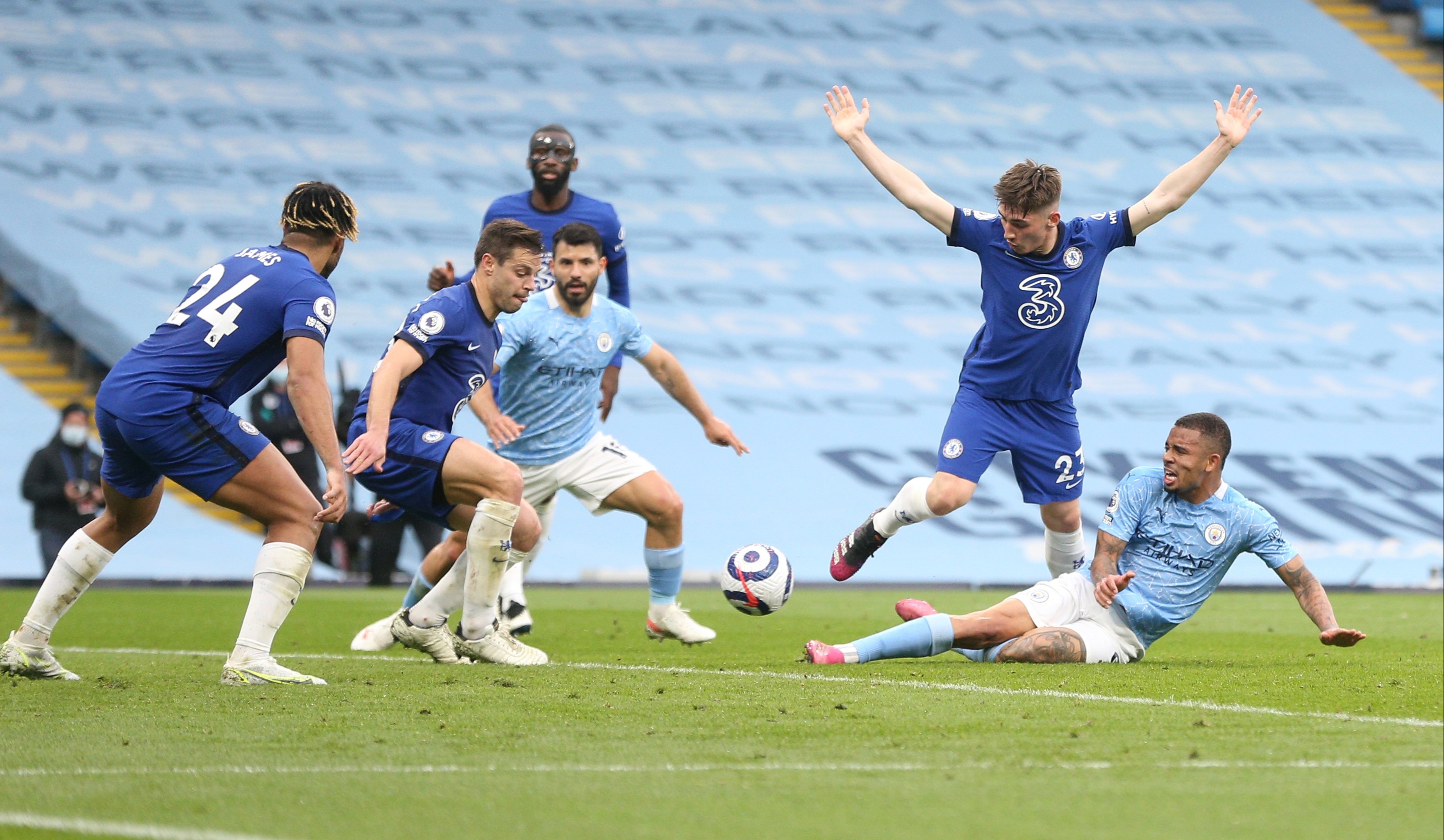 For Aguero, something of a grimace amongst the grins. He knew it was a goal that should have gone to him.

If only that was as embarrassing as it got, Sergio. Sixty seconds later it got a whole lot worse.

Again Jesus was involved, trading passes with his strike pal, before Billy Gilmour carelessly and unluckily bundled him in the back and down he went.

Up stepped Aguero, who decided on a clever, cute, Panenka-style dink down the middle of the goal. 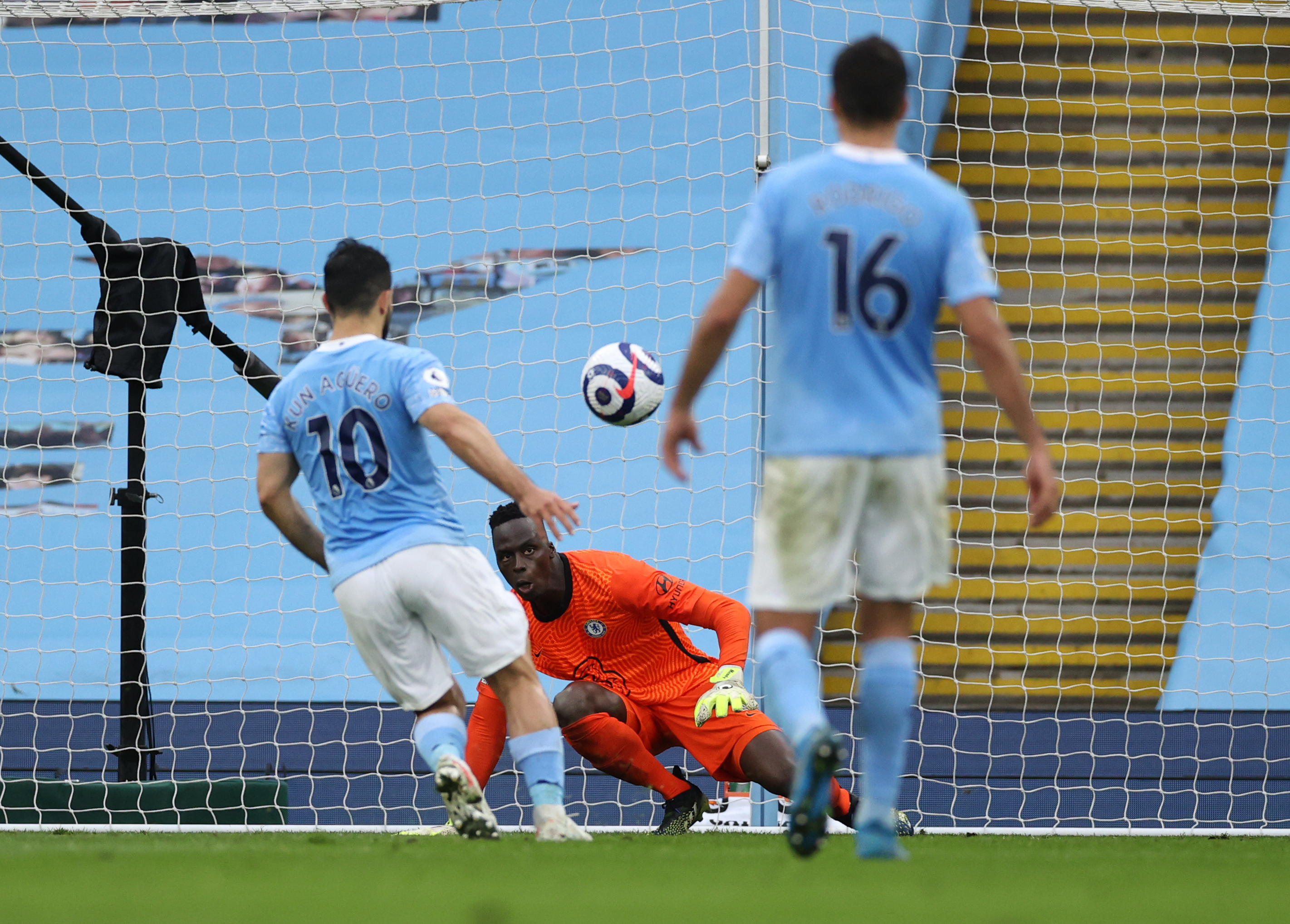 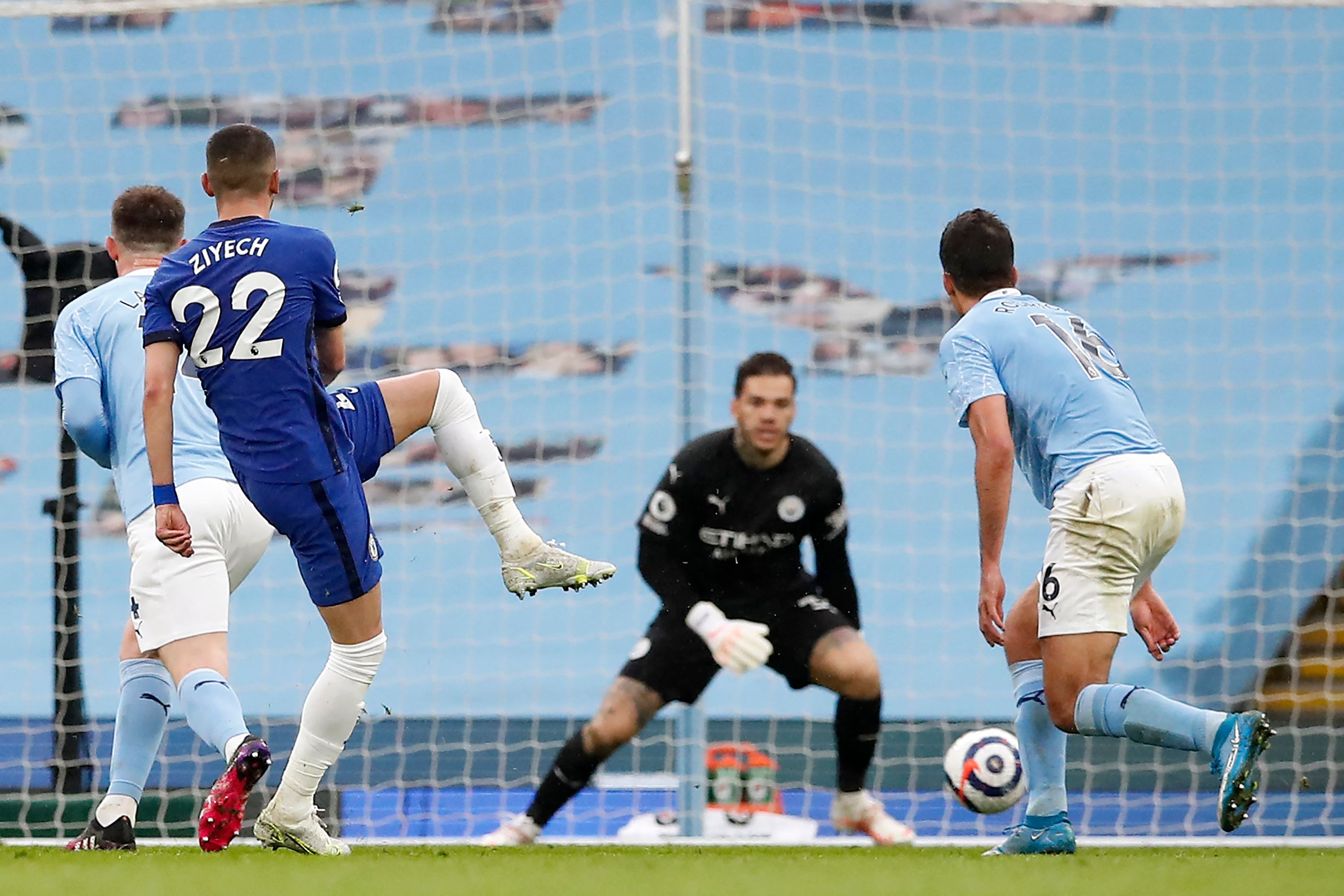 Great when they come off, of course. But boy you don’t half look daft when they don’t. And this one never went close.

Keeper Edouard Mendy was almost on his knees, but had time to jump up and catch it like a nodded back pass. On the touchline, Guardiola spun round in frustration and anger.

He knew it could be costly. He knew City were off the pace. He knew Chelsea could make them pay. And boy, didn’t they just.

And the fact it was of their own making just made it even worse, Rodri coughing up possession needlessly for the leveller.

Christian Pulisic fed Cesar Azpilicueta down the right, and when he picked out Ziyech, the low finish couldn’t have been more in the corner. 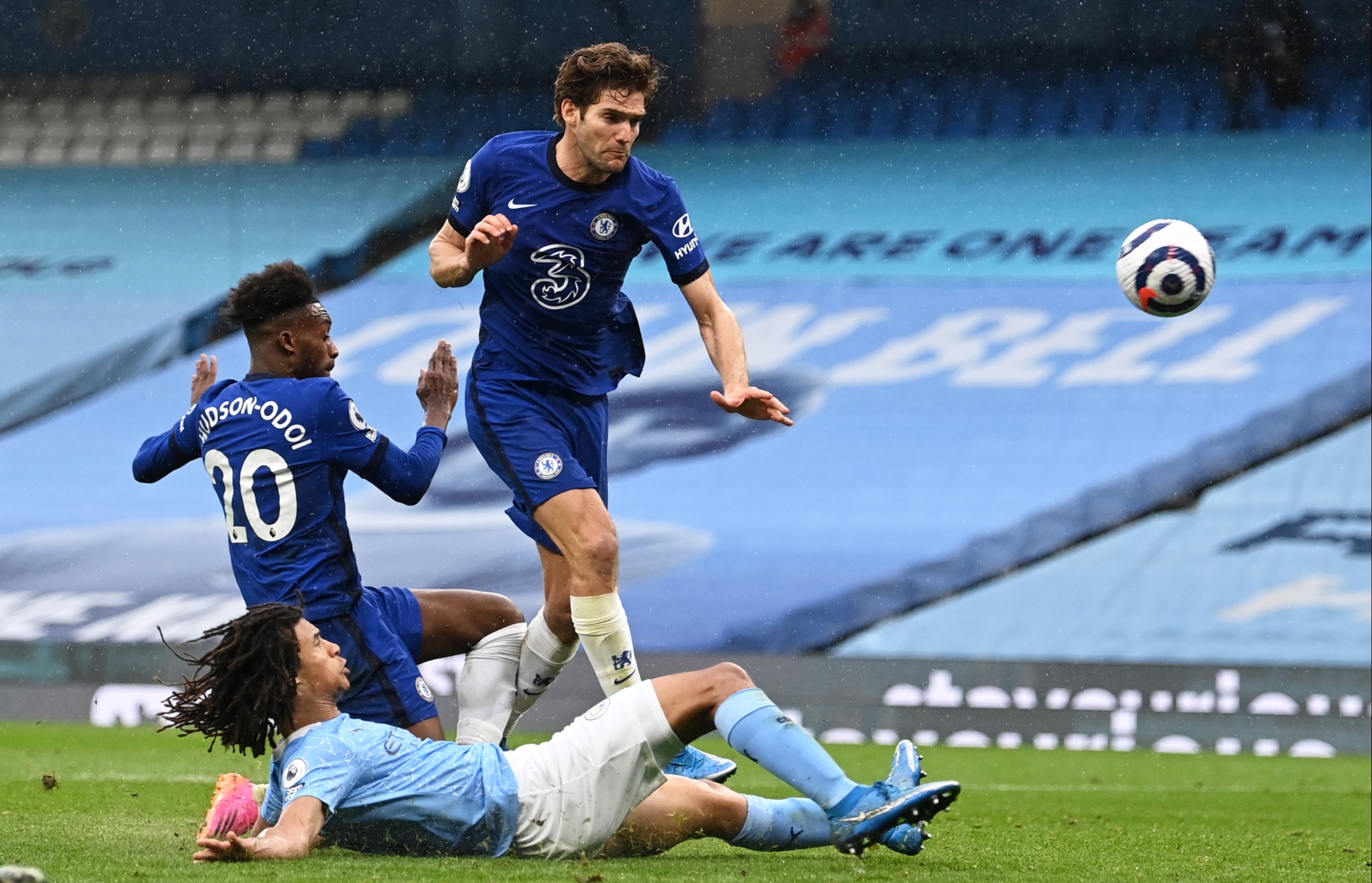 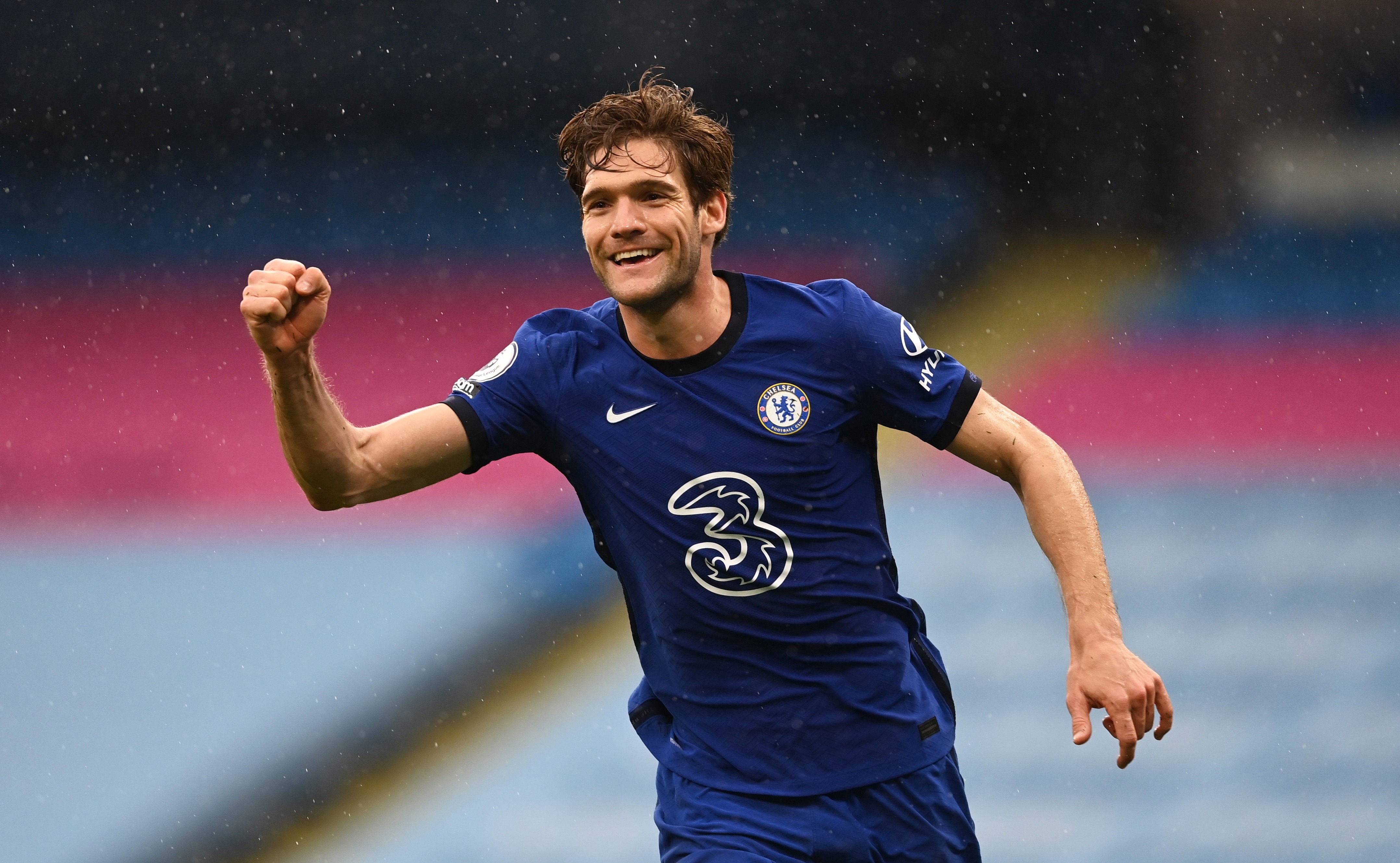 If that had Pep raging, it was nothing compared to the coat-chucking tantrum he threw when Kurt Zouma got away with sending Sterling tumbling in the box.

A point then…or suddenly, staggeringly not even that.

For in stoppage time Werner got down the City flank yet again, this time the right, and when he crossed low, Alonso somehow scooped in the winner.

Two disallowed Werner goals and another from Callum Hudson-Odoi show this was no smash and grab either.

Forget, too, that City will be champions sooner rather than later. It simply wasn’t supposed to end like this…and Pep knows it.