TWITTER understandably went crazy when a photo of a Manchester United fan with 'Aguero' printed on the back did the rounds yesterday.

But not all was quite as it seemed… 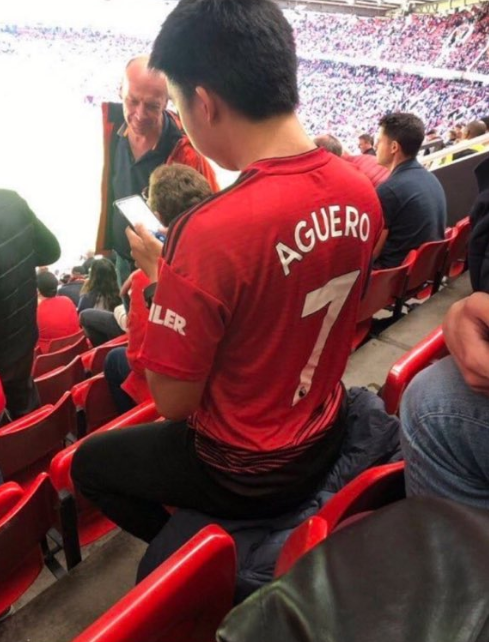 Joe's Si Lloyd posted the photo with the caption "Just delete this club," as he – and thousands of others – despaired at the seemingly embarrassing desperation for Liverpool not to win the league by cheering on City striker Sergio.

One United fan account wrote: "This type of fan is who @ManUtd choose over season ticket holders. How he wasn’t launched off that top tier I’ll never know (said in jest snowflakes)."

But it turns out the Manchester United fan's name is – you guessed it – Aguero.

Lloyd and United's very own Aguero then posed for a selfie and the Manchester-based reporter explained the situation.

He wrote: "HIS NAME’S AGUERO! HAHAHAHA! DELETE ME!

"Lovely fella. He’d come from Australia. That was his first game.

"Told him about the tweet and apologised that everyone sitting around him had been bad mouthing him first half.

"Apologised to him again at the end that he’d travelled to the other side of the world to watch that.

Was expecting the number 7 and not having 'Kun' to be enough, it wasn't but at least it was a talking point for a bit.

"Says everything about this season that I and numerous people around me were willing to believe a United fan was capable of having a rival’s name on the back of his shirt just because he might help Liverpool not win the league. Shame on me."

He said: "Hey mate, actually made a twitter account after this all blew up but wanted to say it was all in good fun and I'm finding this hilarious at the moment!

"Was expecting the number 7 and not having 'kun' to be enough, it wasn't but at least it was a talking point for a bit hahaha.

"Good to know my first trip to OT brought a laugh to a few people and helped us forget what we were seeing on the pitch."

The funny incident led to a number of other football fans with unfortunate surnames get involved in the debate.

Daniel Barnsley said: "I am a Leeds United fan. My surname is Barnsley… I have had grief before!"

James Lampard added: "I'm a Man United fan with the surname "Lampard". Had "Lampard 7" on the back of a United shirt once and was literally getting heckled in the street!"

Meanwhile, namesake Luke Lampard wrote: "Surname Lampard. Been an Arsenal fan all my life. Never been brave enough to get it on the back of my shirt."

And Joe Rooney also chipped in. He admitted: "Rooney on a Chelsea shirt, weren't great."