The Red Devils are reportedly chasing the Real Madrid star after his promising loan spell at Europa League conquerors Sevilla. 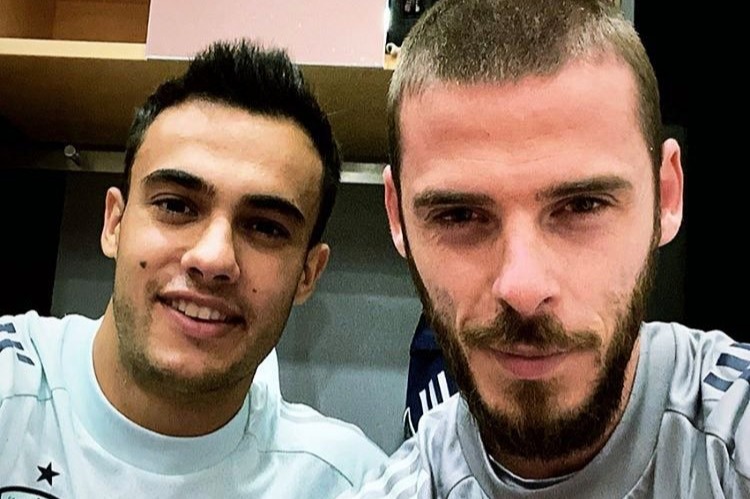 Together on Spain duty, the pair posed for a snap that both posted online.

De Gea started his country's 1-1 draw with Germany on Thursday and Reguilon will hope to make his debut against Ukraine tomorrow.

And the left-back's apparent friendship with De Gea led to some fans dreaming of the goalkeeper acting as his club's transfer agent.

Twitter user Prakhar commented: "Reguilon to Man Utd I beg. Agent De Gea make it happen. Shaw is a liability being injured most of the time, Williams isn't a footballer."

Another joked: "De Gea knows exactly what he’s doing with that picture of him and Reguilon as well. I said I wasn’t going to get overly involved in transfers this window but here I am imagining Reguilon singing glory glory Man United with Micky Phelan on the trumpet."

While one Red Devils supporter tweeted: "De Gea knows something we don't when he teased and took a photo with just him and Reguilon. I will hang my hope on that."

United were said to have offered £27million to sign Reguilon from Real.

However the LaLiga giants have not yet decided whether to keep hold of the 23-year-old, with Marcelo and Ferland Mendy comfortably ahead in Zinedine Zidane's pecking order.

The latest reports suggest Madrid are open to loaning out Reguilon once more, after he made 38 appearances for Sevilla last campaign.

PSG, Juventus, Napoli and Tottenham have also been named as interested parties.