Mark Messier’s legendary NHL career is defined by the dynasty he helped to build with the Edmonton Oilers, where he would win five Stanley Cups from 1984-1990 before adding one more with the New York Rangers in 1994, finally ending New York City’s 54-year drought. But before the glory and before the accomplishments, came humble beginnings that shaped one of hockey’s most iconic players.

In his new book titled “No One Wins Alone,” Messier talks about growing up in Alberta, Canada, as the son of a hard-knocks hockey player and coach, his beginnings with Wayne Gretzky, his journey through the NHL, and everything in between. 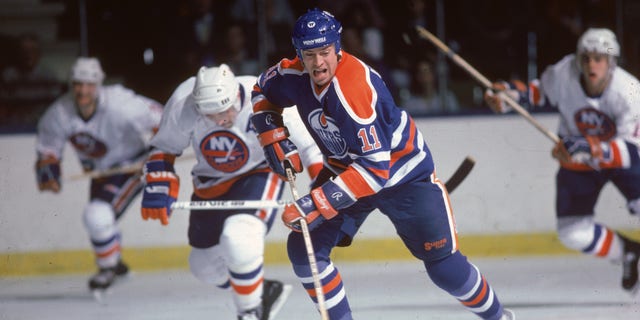 Canadian hockey player Mark Messier of the Edmonton Oilers skates with the puck as he is chased by three New York Rangers during a game against in the 1985 – 86 season.
(Getty Images)

Messier explained that when he really thought about all of his experiences, both on and off the ice, that’s when writing a book finally made sense.

“It’s part childhood, part leadership, part psychology and I think that interested me more than just writing a hockey book or a memoir.”

One storyline focuses on Messier’s beginnings with the Oilers and, of course, playing with Gretzky.

“When I first heard about Wayne when he was 9 years old,” Messier told Fox News. “I think [the media] did a big write-up — I grew up on the West Coast, he grew up on the East Coast – The Canadian Magazine had done a big expose on him, scoring 380 goals in a season … you know, and then playing junior hockey at 14 and all that.”

Messier writes about how their early careers seemed to orbit one another: junior hockey, the World Hockey Association and eventually the NHL.

“I don’t think I ever really tried to compare myself to Wayne — in a way you compare yourself to everybody you’re playing with or against in some fashion, I guess, because there’s a barometer there whether you’re good enough to play at any league, so I guess there’s that.” 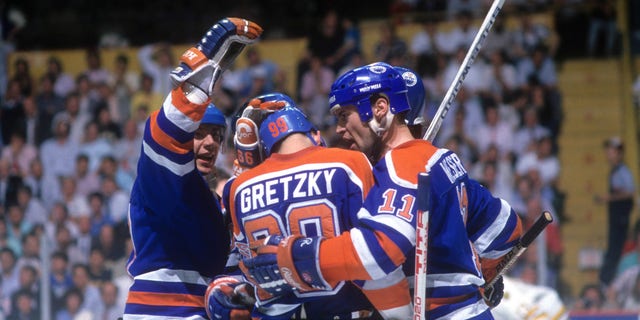 Jari Kurri #17 and Mark Messier #11 of the Edmonton Oilers congratulate teammate Wayne Gretzky #99 after scoring a goal during the 1988 Stanley Cup Final against the Boston Bruins in May 1988 at the Boston Garden in Boston.
(Getty Images)

He continued: “Wayne and I were so different in the roles on the team that the compatibility from a professional standpoint was obviously great and then of course becoming the great friends we did was really one of the highlights of my career.”

Perhaps the biggest theme in Messier’s book is teamwork and what can be accomplished when talent meets cohesion.

The best example of this was Gretzky’s trade to the Los Angeles Kings in 1988, a massive blow to the Oilers dynasty that saw four Stanley Cups in just five years, two back-to-back runs. 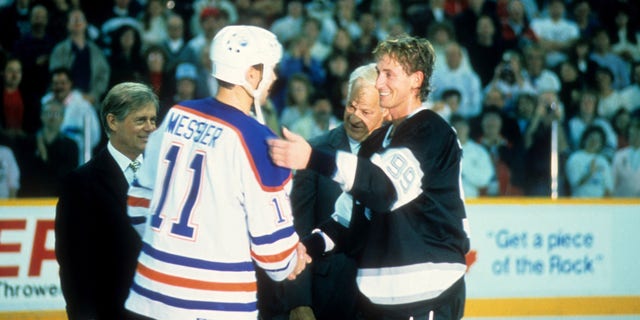 Mark Messier #11 of the Edmonton Oilers congratulates Wayne Gretzky #99 of the Los Angeles Kings after he scored his 1851st career NHL point on October 15, 1989 at the Northlands Coliseum in Edmonton, Alberta, Canada.
(Getty Images)

“The quick answer character, grit, determination, that’s what that ’90s team was all about,” Messier told Fox News when asked how the team was able to pull off a fifth championship following Gretzky’s departure. “The first year was a bit of a transition for us, obviously, with Wayne leaving. And so when I think of that ’90 Cup, I just think about grit, character, determination — that kind of sums that team up.”

Messier’s book, which goes on sale Oct. 26, goes into detail about the ups and downs in the years after that last Cup. He discusses the moment he knew his time in Edmonton had finally come to an end and how that opened another door with an even bigger challenge ahead. The book goes beyond Messier’s hockey career, discussing his travels, thoughts, and more. 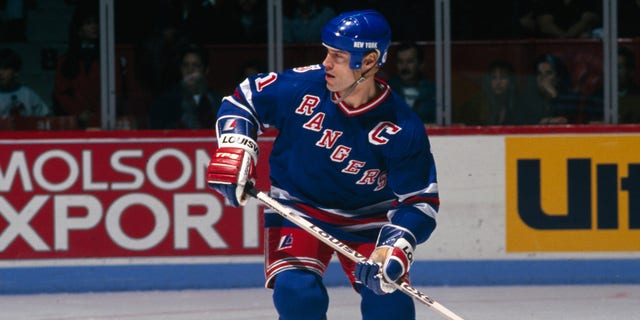 MONTREAL, CANADA – CIRCA 1990:  Mark Messier #11 of the New York Rangers skates Circa 1990 at the Montreal Forum in Montreal, Quebec, Canada.
(Getty Images)

“It was fun [but] it was really hard. It was really hard work. It was excruciating at times. It might have looked easy from the outside because of the great players that we had but it was hard to win.”