Glenn Maxwell was left “shattered” after his Melbourne Stars blew their chance for a first Big Bash League title.

Needing just 55 runs from 43 balls with 10 wickets in hand, the Stars lost a stunning 7-19 from 29 balls as the trophy slipped through their grasp as the Melbourne Renegades prevailed by 13 runs in front of 40,816 at Marvel Stadium. 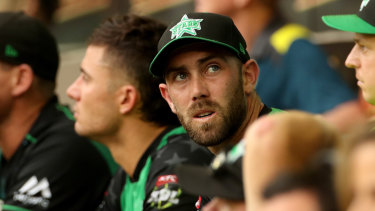 Glenn Maxwell looks to the scoreboard after his dismissal during the BBL match final.Credit:AAP

Stars captain Maxwell didn’t go as far as calling his side’s capitulation a “choke” when asked directly, although said he probably would’ve chosen to bat first if he had his time again and suggested openers Ben Dunk (57) and Marcus Stoinis (39) could’ve upped the ante while still in.

“We were so close. For eight overs it looked like we were winners. It’s hard to take right now,” Maxwell said.

“You could feel that on the boundary, we needed to kill the game a little bit earlier, go harder at the start while the ball was hard and just get ahead of the run rate.

“You can kill games in the power play when you are chasing scores like that, and 0-36 is great, but it was that sort of game, we probably needed to go harder. That’s all in hindsight.”

Maxwell was one of those who let his side down, making one from six balls. But rather than completely pointing the finger at his batsmen, the all-rounder praised the Renegades’ bowlers.

“We didn’t get off to a flyer, they executed and were able to build up enough pressure to make it hard for us.

“We just couldn’t have a batter come in and do the job. It seemed like every time we had someone come in and take a risk they got out.”

Maxwell heads off to India for Australian white ball duties on Monday but said this defeat would sting.

“This will probably drive us next year, and we can use it as good motivation to go one step further,” Maxwell said.