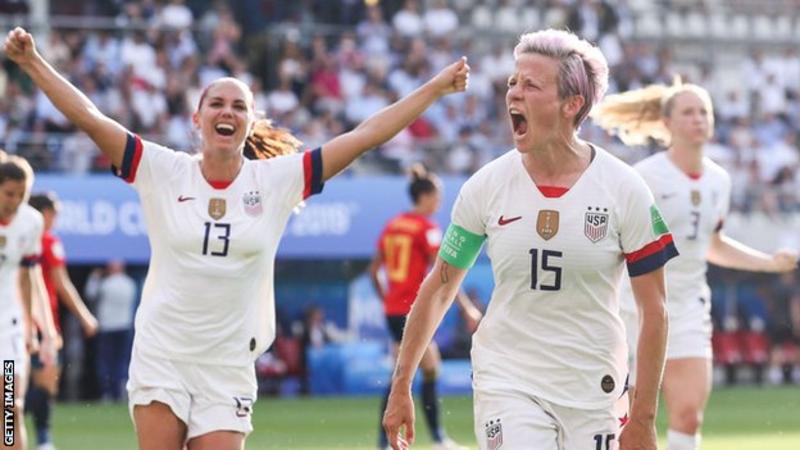 US co-captain Megan Rapinoe says she “stands by” her comments about not visiting the White House and encouraged her team-mates to follow her lead.

The 33-year-old was criticised by president Donald Trump on Wednesday for snubbing a visit if the American team win the Women’s World Cup.

Trump told Rapinoe not to “disrespect our country”.

But in a news conference before the US team’s quarter-final against France, Rapinoe refused to back down.

“I stand by the comments that I made about not wanting to go to the White House with exception of the expletive,” she said on Thursday.

“My mom would be very upset about that.”

Team-mate Ali Krieger said in a tweet she would “stand by” Rapinoe, while forward Alex Morgan said before the tournament she would not accept an invitation.

Rapinoe had been asked by football magazine Eight by Eight whether she was excited to visit the White House if the US won the tournament, but she dismissed the idea, saying the team would not be invited.

Using an expletive, she also made clear that she would not attend in any event.

Opening Thursday’s appearance in front of the media, she said: “I think obviously answering with a lot of passion, considering how much time and effort and pride we take in the platform that we have, and using it for good, and for leaving the game in a better place and hopefully the world in a better place – I don’t think that I would want to go.

Rapinoe said she “would encourage my team-mates” to follow her stance and not be “co-opted by an administration that doesn’t feel the same way and fight for the same things we fight for”.

The US co-captain, who is openly gay, referred to herself as a “walking protest” in an interview earlier this year.

She is also one of 28 players suing the US Soccer Federation, alleging the men’s team earns more than the women despite playing fewer games and being less successful.

Trump tweeted that Rapinoe, who scored two penalties as the US beat Spain in the last 16, should “win before she talks”.

“Megan should never disrespect our Country, the White House, or our Flag, especially since so much has been done for her and the team,”

“Be proud of the Flag that you wear. The USA is doing GREAT.”

He later added he would invite the team whether they “win or lose” in France.

Rapinoe was part of the US team that visited the White House in 2015 to meet then president Barack Obama after winning the last World Cup.