DUBLIN, Ohio — Bud Cauley arrived in town Monday for the Memorial Tournament and was asleep in bed as the clock approached midnight. That’s where he wished he had been on the Friday of last year’s event, when he sustained serious injuries as a passenger in a late-night, single-car accident.

The experience was eye-opening, said Cauley, who has tried to be more careful since the crash. The driver pleaded guilty in January to three felony counts of vehicular assault and one misdemeanor charge of operating a vehicle while intoxicated.

Cauley, 29, has not played the Memorial as if haunted by the accident, which occurred less than a mile from Muirfield Village Golf Club. Winless on the PGA Tour in 156 starts, Cauley shot a two-under-par 70 on Friday to head into the weekend with a seven-under 137. He is tied for fifth, two strokes off the lead shared by Troy Merritt (66), Lee Kyoung-hoon (67) and Martin Kaymer (68).

“To have the best week going, so far, here is a little ironic,” said Cauley, who missed the cut last year with scores of 77 and 76.

Last year, he stayed with Justin Thomas, a close friend, at a guesthouse on the property of the former N.H.L. defenseman James Wisniewski, who is Thomas’s acquaintance.

Thomas had advanced to the weekend, so he was in no mood for socializing, but he encouraged Cauley, who had remained in town, to spend the rest of the evening with Wisniewski and his friends.

According to an account in The Columbus Dispatch, one of those friends, a surgeon in his 30s, got behind the wheel of his BMW shortly before 11 p.m. with three passengers: Wisniewski, Cauley and a 20-something pharmacist, Thomas Nichols. The driver, David Crawford, lost control of the car, and it veered off the road, hit a culvert, flew into the air, spun into a tree, flipped over and landed in a ditch.

Cauley, who was behind the driver’s seat, was knocked unconscious. He sustained a concussion, a leg fracture, six broken ribs and a collapsed lung. He woke up in the hospital with no memory of what had happened. 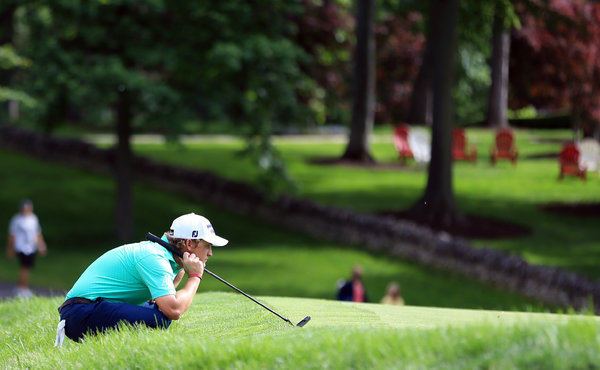 “That was probably one of the hardest nights I’ve ever had in my life,” Thomas said, adding: “I felt like it was somewhat my fault somehow. It was like, ‘What if something happens and he can’t play golf again?’ ”

Two days after the accident, Cauley underwent an operation on his ribs. The surgeon assured Cauley that he would be able to resume his golf career. “But,” Cauley said, “he had never performed that surgery on a golfer and really didn’t know.”

Jack Nicklaus and his wife, Barbara, the tournament hosts, visited Cauley in the hospital. Nicklaus also happened to be at the Bear’s Club, a private course in South Florida, more than three months later when Cauley took his first post-accident swing, a wedge shot that he hit thin. He is playing this week on a sponsor’s exemption offered by Nicklaus.

Thomas has passed the accident site every day this week and has noted missing bark on the tree that the car hit.

Cauley has no desire to revisit the scene of what he described as “the scariest night” of his life. “I haven’t had any bad thoughts or anything as far as what happened last year,” he said, “but I don’t think I’m going to go drive by it to test it.”

Cauley said that the Memorial had always been one of his favorite tournaments but that he was even more appreciative of the opportunity to play it now. “When something like that happens to you, I think it would change anyone,” he said, adding, “I’ve definitely taken a lot of things from it, tried to learn from it and just do the best I can going forward.”

Cauley wrote a letter to the sentencing judge supporting probation for the driver, Crawford, whose driver’s license was revoked for four years after his guilty plea. His medical license was suspended for six months.

“He has a career. He has a family,” Cauley said. “Obviously, it was very unfortunate what happened. I didn’t want anybody to be affected any more negatively.”

Of the people in the car, Wisniewski is the only one who has been in contact with Cauley. If he could turn back the clock, Cauley said, he would have done things differently, including this: He would have played better so that he had no reason to be out late on the Friday night of a tournament week.

“Obviously,” Cauley said with a laugh, “playing well and making the cut is probably better for my health.”