Mike Trout's nearly completed 12-year, roughly $US430 million ($A606.7 million) contract extension with the Los Angeles Angels, which when finalized would set a new benchmark for North American sports, will undoubtedly spark a new round of complaints and criticism, not exactly unfounded, that athletes are egregiously overpaid relative to their contributions to society.

But within the confines of baseball, the Trout deal can be understood to have the exact opposite effect: if anything, the best player in the game – even at a total dollar figure no one else has approached, let alone exceeded – remains vastly underpaid relative to his performance-value within the sport. 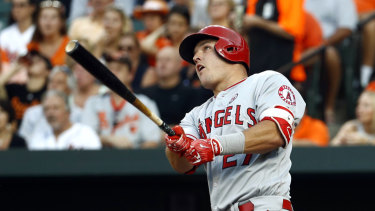 Trout, 27, has been considered the consensus best player in baseball since early in his career – a career that, so far, has produced two American League Most Valuable Player awards (and four runner-up finishes), seven all-star appearances and six Silver Slugger awards. But the designation of best player in the game actually undersells the place in history of a player who, by any measure, has few peers in any era.

According to FanGraphs, no hitter in baseball history has amassed more wins above replacement through their age-26 season than Trout (who played the majority of 2018 as a 26-year-old), at 64.9 WAR.

FanGraphs defines WAR an estimate to answer the question, “If this player got injured and their team had to replace them with a freely available minor leaguer or a AAAA player from their bench, how much value would the team be losing?” This value is expressed in a wins format.

But it is when you place Trout in the context of his own era that his value to the Angels is revealed. Since the start of 2013, Trout's first full season in the majors, he has been worth 54.1 WAR. Second place in that span is third baseman Josh Donaldson, at 35.7. Trout's average WAR of 9.0 for those six seasons is a mark only two other players (Bryce Harper in 2015 and Mookie Betts in 2018) have reached in a single season. 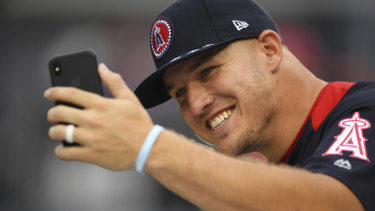 Trout’s WAR record is the best in the game.Credit:AP

WAR is not a perfect statistic by any means – and it is subjective enough that a second version, with different math, exists at Baseball-Reference.com – but using the above figures, it is fair to say Trout has been roughly 50 per cent better than the second-best player in baseball, Donaldson, over the past six seasons. In other words, his career to this point has been nothing short of Ruthian.

And yet, even with the new contract, Trout will barely earn the designation of the sport's best-paid player year-to-year. Trout's new deal will pay him an average annual value (AAV) of about $US36 million, which is only about 5 per cent more than the next-highest-paid, Arizona Diamondbacks pitcher Zack Greinke, with an AAV of $US34.4 million. Among position players, Colorado Rockies third baseman Nolan Arenado, whose new extension pays him $US32.5 million in AAV, is the next-highest-paid position player.

Trout was due to reach free agency at the end of the 2020 season, at which point his availability was expected to set off a frenzied chase potentially led by some of the biggest spenders in the game: the New York Yankees, Los Angeles Dodgers and Philadelphia Phillies, among others.

And this would have come in an economic atmosphere in which – despite an overall downturn for veteran free agents – top-end talent continues to earn record-setting deals. Just weeks ago, right fielder Harper landed a 13-year, $US330 million deal with the Phillies, which stood as the largest free agent contract in North American sports history until Tuesday, when Trout's Angels deal blew it away.

As crazy as it sounds, given the record-shattering nature of his new contract, Trout and agent Craig Landis almost certainly left money on the table by signing away his future 20 months before he would reach free agency. (That leaves Boston Red Sox outfielder Mookie Betts as the new leader in the clubhouse for Player Most Likely to Sign a Record-Setting Deal when he hits free agency at the end of 2020.)

While it was natural for the media and fans (as well as Harper) to play up Trout's well-established Philly-area roots and assume he would eventually return to that area with the Phillies, clearly Trout valued his familiarity and comfort with the Angels and owner Arte Moreno, as well as the roots he had begun to put down in Anaheim since his debut in 2011.

Trout has never been one to seek the spotlight, and presumably was not the type to milk every last dollar out of his limited window of opportunity as an athlete. His decision to forego free agency and sign away his future to the Angels capped an offseason that saw baseball struggle to recalibrate the notion of value, causing an ominous rift between the league and the union over the direction of free agency.

While the Angels got a relative bargain in retaining Trout through some of the prime years of his career, most players experience a decline in their mid- to late-30s that can turn a splashy contract into an albatross – and Trout's new deal will pay him through age 39.

But given the rarefied place Trout currently occupies, and if we assume a typically gradual decline and not a precipitous one, he should still be a productive player deep into this contract. Ultimately, his value over the course of the deal will be tied to not only his production, but the number of championships the Angels win with him.

The dollar figure – about $US430 million, or $US100 million more than Harper, and $US70 million shy of half a billion – jumped off the page. How could any single human being, especially one whose job is to hit a small ball with a wooden bat, be worth anywhere near that much money?

But within baseball, a game at which Trout excels like virtually no one else in history, the question might be the opposite: Isn't he worth so much more than that?