Cleveland: Matthew Dellavedova’s Cleveland have fallen to his former side Milwaukee as a rampaging Giannis Antetokounmpo matched his NBA career high of 44 points on the way to the Bucks’ 114-102 win.

Antetokounmpo’s big Friday night came after being held to a season-low 12 points on Wednesday in a loss to Indiana. He was 14 of 19 from the field, made 16 of 21 foul shots and had 14 rebounds and eight assists.

The Bucks never trailed and held off a late Cleveland spurt. The Cavaliers cut the lead to five midway through the fourth quarter on Cedi Osman’s three-pointer but Antetokounmpo had a three-point play and an assist on Brook Lopez’s basket that beat the shot clock, pushing the lead to 111-99.

Australian guard Dellavedova scored 10 points off the bench for the Cavaliers against his former side after being traded from Milwaukee for George Hill last week.

Brook Lopez scored 19 points and Eric Bledsoe had 16 for the Bucks.

Thaddeus Young had 26 points and 10 rebounds against his former team and the Indiana Pacers overcame Joel Embiid’s 40-point night to beat the Philadelphia 76ers 113-101 in a match-up of eastern conference contenders.

Embiid also had 21 rebounds, becoming the first Sixers player with at least 30 points and 20 rebounds in a game since Charles Barkley in 1990. 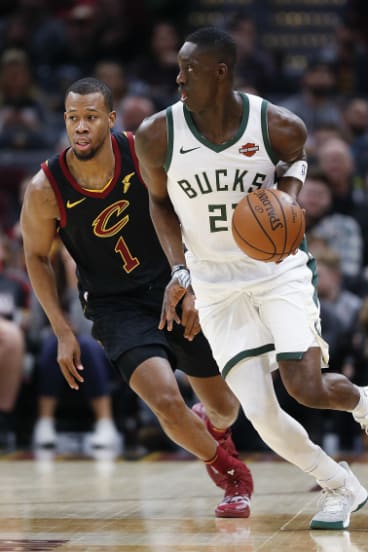 Embiid is the first player in the NBA this season with a 40-point, 20-rebound game.

J.J. Redick added 22 points and Australia’s Ben Simmons had 18 for the Sixers, who dropped their second straight at home after starting the season 14-1 in their own building. Both losses came without four-time All-Star Jimmy Butler, who’s been out with a strained groin.

In other games, Emmanuel Mudiay scored a career-high 34 points as the visiting New York Knicks rallied from a 21-point deficit to beat the Charlotte Hornets 126-124 in overtime.

The Boston Celtics beat the Atlanta Hawks 129-108 for their eighth straight victory, the Brooklyn Nets beat the visiting Washington Wizards 125-118 for their season-high fourth straight win and the Miami Heat scored a 100-97 victory over hosts the Memphis Grizzlies.