But the Dandenong Rangers will need something stronger if they want to keep the Capitals' swarming defence at bay when they meet at Dandenong Stadium on Sunday. 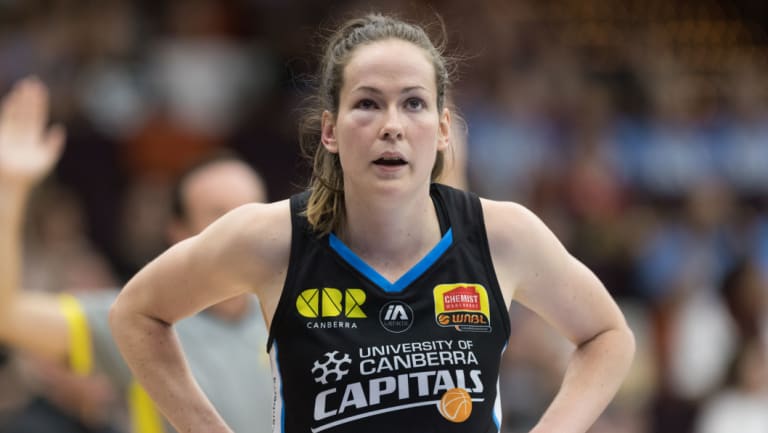 The Capitals are looking for their fifth consecutive win after they thrashed the Townsville Fire at the National Convention Centre on Friday night.

Froling was sporting a severely swollen eye, but it's started to go down as the team travelled to Melbourne on Saturday.

It wasn't from any stray opponent elbows, but a mosquito in her car as she drove to the game.

The 22-year-old said it didn't affect her during the game, but it might affect what she does before games in the future.

"Some mozzie repellent, that's what I need to put on before every game with my deodorant now I think," Froling joked.

"I was driving to the game and a mosquito got in my eye, and within five minutes it just blew up.

"I don't think it bit me, but I squished it and I rubbed my eye. I think that's what's happened. It didn't like it at all so it just blew up.

"It was fine. It was just a bit watery and I lost a bit of vision where it was swollen, but it felt better by the end of the game so it was fine – I only need one eye."

The Capitals have won their past four games by an average margin of 28.5 points.

While their multiple offensive weapons have obviously been firing, that hot streak has been built on the back of their defence.

Something they'll look to continue against Dandenong on Sunday.

Capitals co-captain Marianna Tolo was like a tower at the heart of that defence against the Fire.

She had three blocks, five rebounds and one steal.

Adding that pressure to their game has been their focus over the last four weeks.

"Blocks is one thing I probably didn't get early, just because I'm not used to it," Tolo said.

"But my timing's starting to come back. I'll be looking to improve that more and more, and make it a threat against teams."

The Capitals see Rangers guard Rebecca Cole as the main threat to ending there winning streak.

She's averaging 18.88 points per game this WNBL season, including a 31-point effort against the Sydney Flames two weeks ago.

The Rangers return home after a tough trip to Perth, where their loss to the Lynx was their third on the bounce – including a 27-point loss to the Capitals.

"Dandenong are a pretty good team. Bec Cole's been playing really well so we want to stop her and then all their players can play and score so we have to make sure we stop all of them," Froling said."

While it was Kia Nurse (33 points) who lit it up offensively for the Capitals on Friday night, Tolo said they had multiple options to go to.

That means if one is down, then another will likely step up in their place.

Tolo will play her seventh game back from her knee reconstruction and she's averaging 14 points per game.

She felt the longer the season goes the more she'll gel with her teammates around her.

"I'm still finding my feet, still getting used to having people around you and I think getting better with rebounding and that sort of thing with every game we play – getting connections with players I haven't played with before as well," Tolo said.