TAMPA, Fla. — Kim Mulkey’s intensity can be as brash as the color of her sideline suits. At times, the Baylor coach challenges her players with a ferocity that just might set one of her blaze-orange jackets on fire.

“I’m just really challenging them and getting on them,” Mulkey said. “In the middle of it, DiDi will go, ‘You tell ’em, Mulkey.’ You know, she’s got that little voice. She just cracks everybody up.”

DiDi Richards, the team’s court jester, is also its most dogged defender. In the N.C.A.A. women’s basketball tournament she has added another element to her game: clutch scorer.

With all the focus on Baylor’s post players — the 6-foot-7 Kalani Brown and the 6-foot-4 Lauren Cox — the national championship game against Notre Dame on Sunday just might be decided by the spindly arms of Richards, a 6-foot-1 sophomore.

“This is what I live for,” Richards said. “I am on this team to be the defensive stopper, and I’m happy to compete against some of the best players in the country.”

In the national semifinal game against Oregon on Friday night, Richards repeatedly hassled the Ducks’ sharpshooter, Sabrina Ionescu, sending her to the floor seething.

When Richards fouled Ionescu on a 3-point attempt with seconds remaining in the first half, Ionescu turned toward Richards with a long, icy stare. “The way she looked at me, I was thinking: Girrrl,” Richards said.

Richards proudly notes that she has been called both a gnat and a fly in the postseason. Against Notre Dame, she will need to be an even bigger pest — a wasp? a green hornet? — because she will be guarding Arike Ogunbowale, whose fourth-quarter buckets were a key to the Irish’s win against Connecticut on Friday night.

“The thing about great players like Arike and Sabrina is, you can’t prepare for them; they play off of you,” Richards said. “The difference is that Arike wants the last shot, she wants the ball in her hand when the shot clock is winding down.” 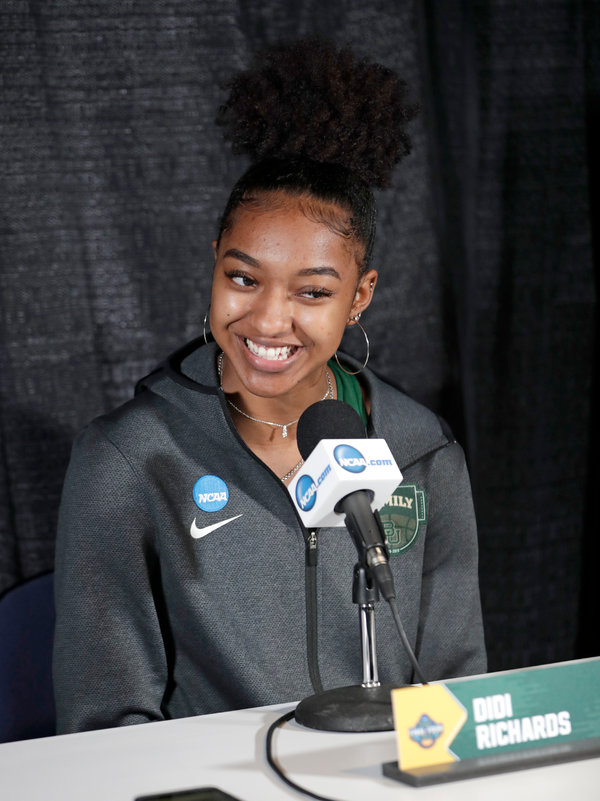 In last year’s Final Four, Ogunbowale hit last-second shots to give her team victories in both the semifinal and championship game.

Notre Dame is aiming for its second-straight national title, while Baylor is shooting for its first since 2012. While the Baylor-Oregon game was a study in contrasts — the bruising, defensive-minded bigs of Baylor versus the pick-and-roll, 3-point launching of Oregon, the championship game is expected to be more of a looking glass.

“This is the first time we’ve played a team that has two outstanding post players,” said Muffet McGraw, Notre Dame’s coach. “We’ve generally thought we had an abnormal advantage in the post. That would be our game plan, to go inside. We do not feel that way. They have terrific players inside with Lauren Cox and Kalani.”

Baylor runs its offense through the post, but Richards has been taking on a more offensive role to ease the double and triple teams down low.

Even so, she earns her playing time by being pesky out of necessity. Tired of sitting on the bench her freshman year, Richards realized that if she focused on defense, she would see more playing time. As a starter this season, her role has evolved in the postseason.

“Now, a lot of people want to talk about her being an offensive liability,” Mulkey said before the Final Four started. “If you saw the last three or four games, I don’t think you’d say that anymore.” She scored 15 points against Oregon.

“She took a critical shot there late in the game, and she didn’t hesitate to do that,” Mulkey said on Saturday. “Now, that comes from her being confident. That may not be, if I was drawing up a play, the option for her to be the first one to shoot that. But, hey, she’s gotten us to this point.”

And she has done it with a wide smile.

“She’s always happy and giddy,” Brown said. “You get a warm sensation about her.”

Even her hair looks peppy. Her trademark “Afro puffs” make her look like a child at Disney World wearing Mickey Mouse ears.

“When she gets excited, her puffs are the first thing to shake,” Brown said. “I think they’re so cute.”