As 60,000-seat, technologically advanced Optus Stadium prepares to host Australia and India in its maiden Test, beginning Friday, venue boss Mike McKenna has revealed his intentions amid frustration from Perth cricket supporters that they do not have set date for a Test each summer.

While the Melbourne Cricket Club and the Victorian government's major events arm have warded off threats before, McKenna's comments come as the MCC's deal with Cricket Australia expires at the end of this summer, while the Sydney Cricket Ground Trust's deal with the governing body expires in 2022. 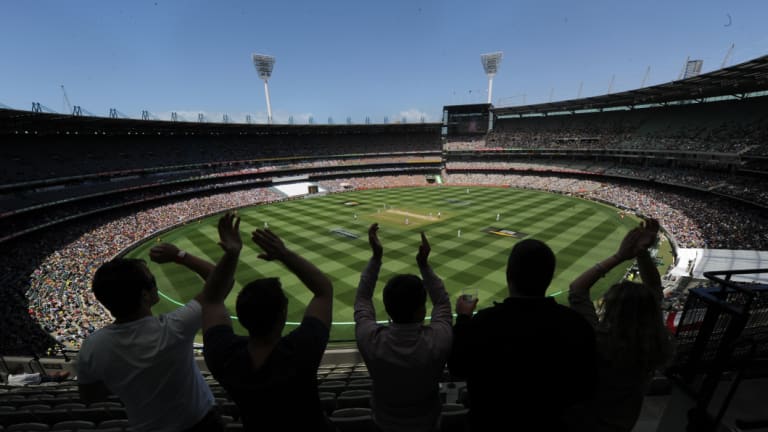 "We are always talking behind the scenes. We had a very good conversation with Cricket Australia and we know what the timings are and what the opportunities are. We would definitely have our oar into lots of things. That just doesn't include cricket, that is any and everything that is going around."

McKenna said he would discuss the issue with CA chairman Earl Eddings and chief executive Kevin Roberts during this week's second Test.

He is the former head of the Big Bash League and has a detailed understanding of how CA operates.

CA insists it has no intentions of changing its "venue hire agreement" with the MCG and the SCG, and the Tests almost certainly will remain at their traditional venues, but it has made it clear to all venues that financial returns from Tests are paramount. It is the traditional format which still largely bankrolls the sport. What a venue and state can provide to support the on-field action is also becoming increasingly important.

The WA government does not have an agreement with CA and would need to play a key role with Optus Stadium to have any chance of a successful raid. Destination NSW, for instance, has a deal with CA.

Cricket's governing body could put the squeeze on the NSW government to upgrade more facilities at the SCG otherwise face losing its Test but that appears unlikely, particularly as the government has pledged a significant sum towards the new $50 million centre of excellence at Sydney Olympic Park.

Brisbane's Gabba ground has suffered as a result of its aging facilities and has slipped in CA's pecking order because it needs an upgrade. The Gabba was overlooked from hosting India in its traditional opening Test of the summer, and will instead host Sri Lanka under lights in late January.

"I know that the government of WA who do work with us to invest in acquiring events like they have done – we have Manchester United coming next year – are keen to spend money on things that will attract people to come from interstate and overseas," McKenna said.

"I think the Boxing Day Test match, New Year's Test match, iconic events like that, if they were to become available, the government over here would be very keen to look at them, for sure.

"It's a decision for them (CA) but we as a venue, we are here to host the biggest and best events and if the opportunity came to host the Boxing Day Test here, or even the New Year's Test, we would be all over it.

"We are definitely keen to attract as many iconic events.

''If we could get an iconic cricket date – Australia Day has worked really well for SACA over the years. Things have now become a bit more fluid, so it's those sorts of date.''

The MCC did not wish to comment when contacted on Wednesday but the SCG is confident there will not be change.

The new Perth stadium, having been awarded a Test – at least for this year – ahead of the old WACA Ground, will be under pressure to deliver a strong crowd, with Roberts already expressing concerns about the lack of pre-match sales.

McKenna is expecting about 70,000 over the five days but that could change if there are strong walk-up sales and local supporters were buoyed by Australia's fighting effort in Adelaide.

The South Australian Cricket Association tipped 113,000 would attend its Test and it was all but on the mark.