UNLUCKY 13 for Norwich and boss Daniel Farke must have run over a black cat.

How else do you explain his team’s bad luck here? 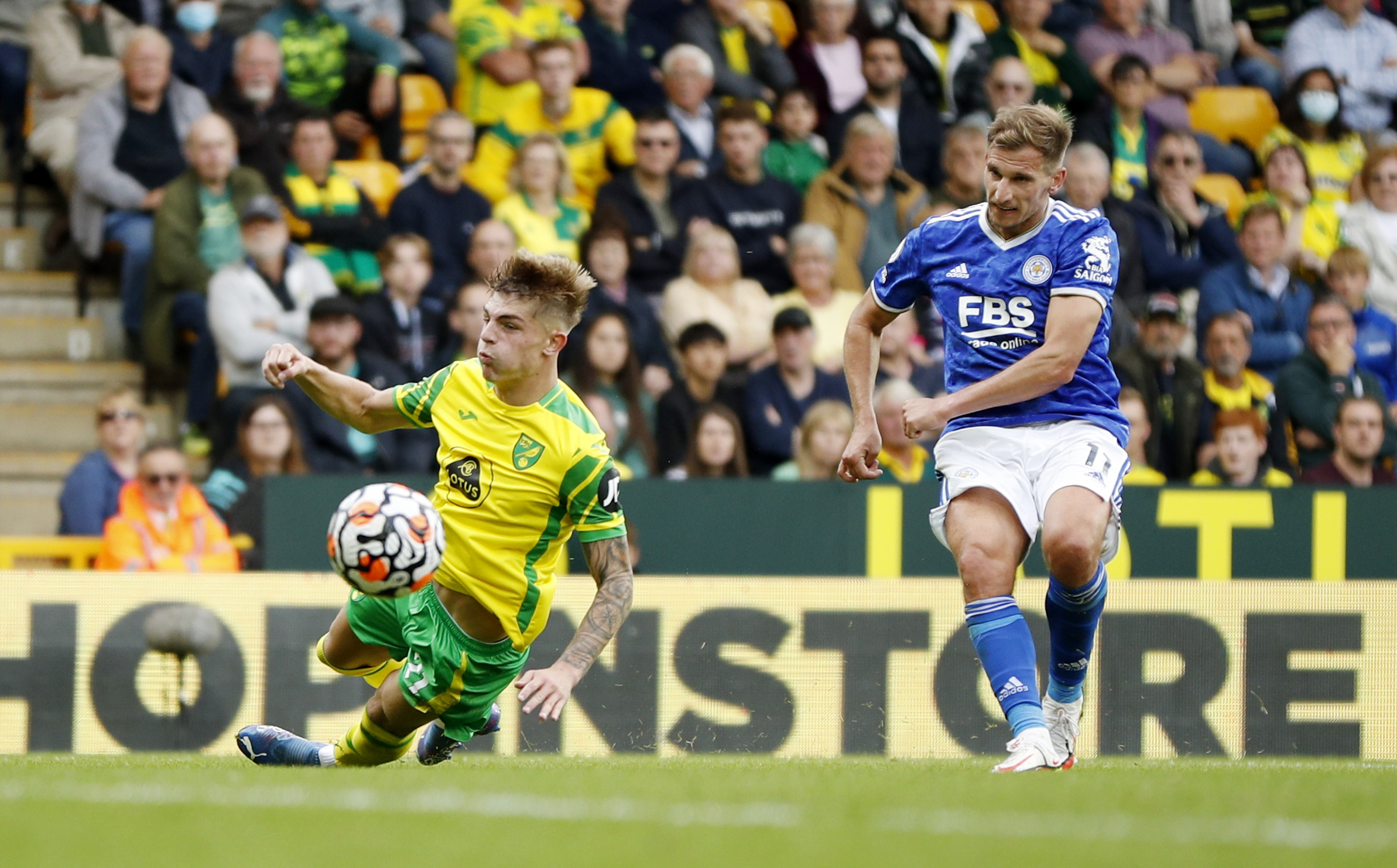 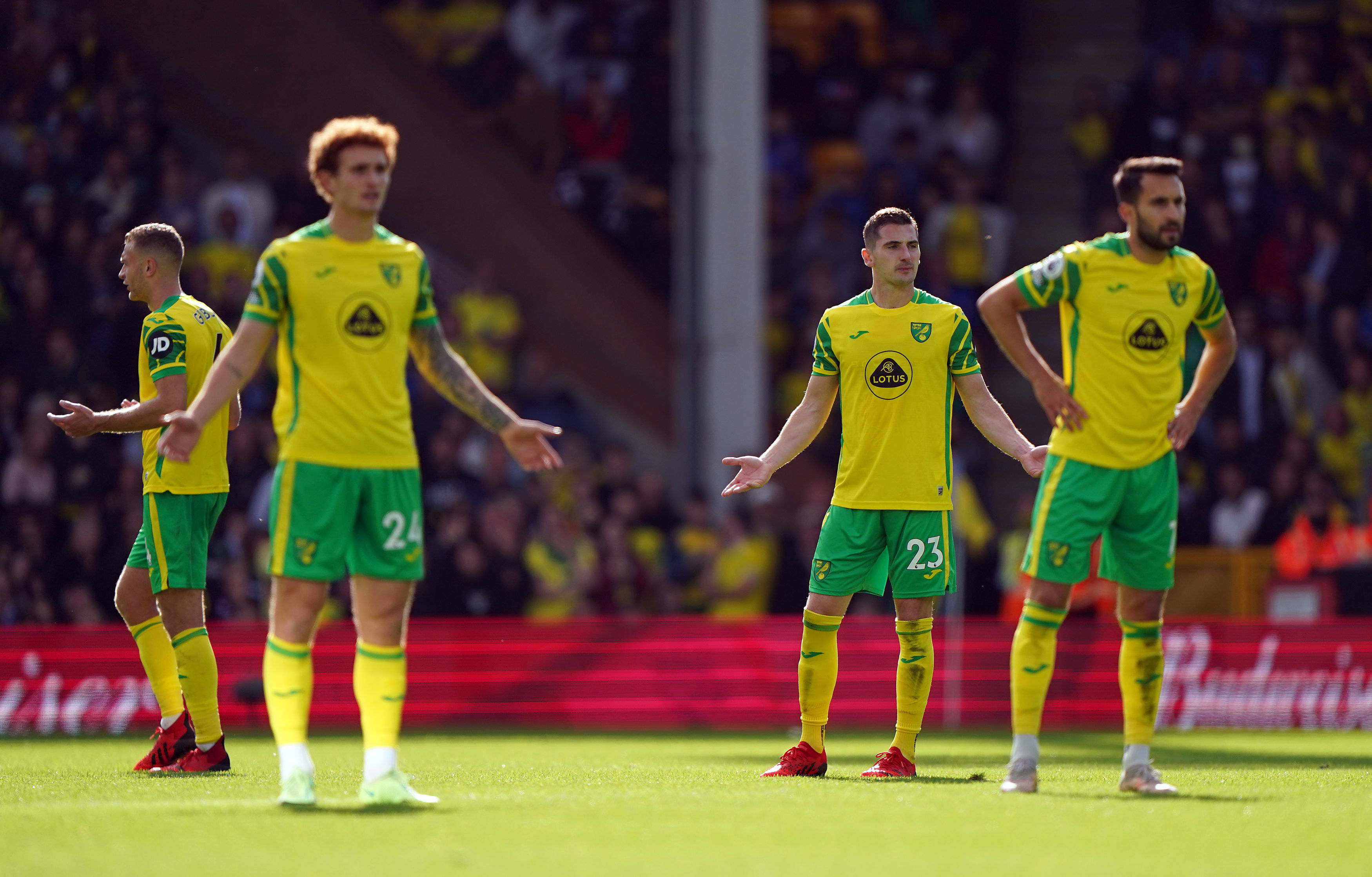 The yo-yo Canaries looked good value to end their run of 12 consecutive Prem defeats spanning this season and their previous one in the top flight.

To rub salt into the wounds, Norwich had what they thought was a late equaliser chalked off for offside as Leicester lucked out with a win their second-half display hardly merited.

The only consolation for Farke’s men is they are not going into the international break bottom of the table after Arsenal’s 5-0 lunchtime thrashing at Manchester City.

Had told Farke at the start of the season Norwich would be above the Gunners at this stage he would have probably bitten your hand off.

But given the Londoners’ current situation, that boast is now a bit like being named the best boy in the girls’ school.

That said, the way they came back into game after falling behind to Jamie Vardy's early strike should give them confidence for the slog ahead.

The last time Norwich won a Premier League match was coincidentally against the Foxes way back on February 28 last year.

Brandon Williams, Norwich’s ninth signing of the summer, was handed his debut after arriving on loan from Manchester United.

And the left-back was at fault for Leicester’s eighth-minute opener when he was caught on ball by the Foxes’ rampaging right-back Ricardo Pereira who then beat Ben Gibson for pace – despite giving him defender a four-yard head start – before crossing for Vardy to steer in his second of the season.

Unfortunately, Pereira pulled his hamstring in the process and had to limp off before the game restarted.

How ironic it was that Norwich were wearing shirts sponsored by flakey sports car firm Lotus – but it was Pereira who broke down after opening the taps.

Something Lotus drivers everywhere could relate to.

But Norwich to their credit did not wait long for a recovery.

Kenny McLean drilled a shot down Kasper Schmeichel’s throat as the hosts tried to get a foothold in the game.

The Danish keeper then got down well to parry a 27th-minute curler from Pierre Lees-Melou, just moments after the Canaries £5million summer signing from Nice had been booked for welcoming James Maddison back to Carrow Road with a kick. 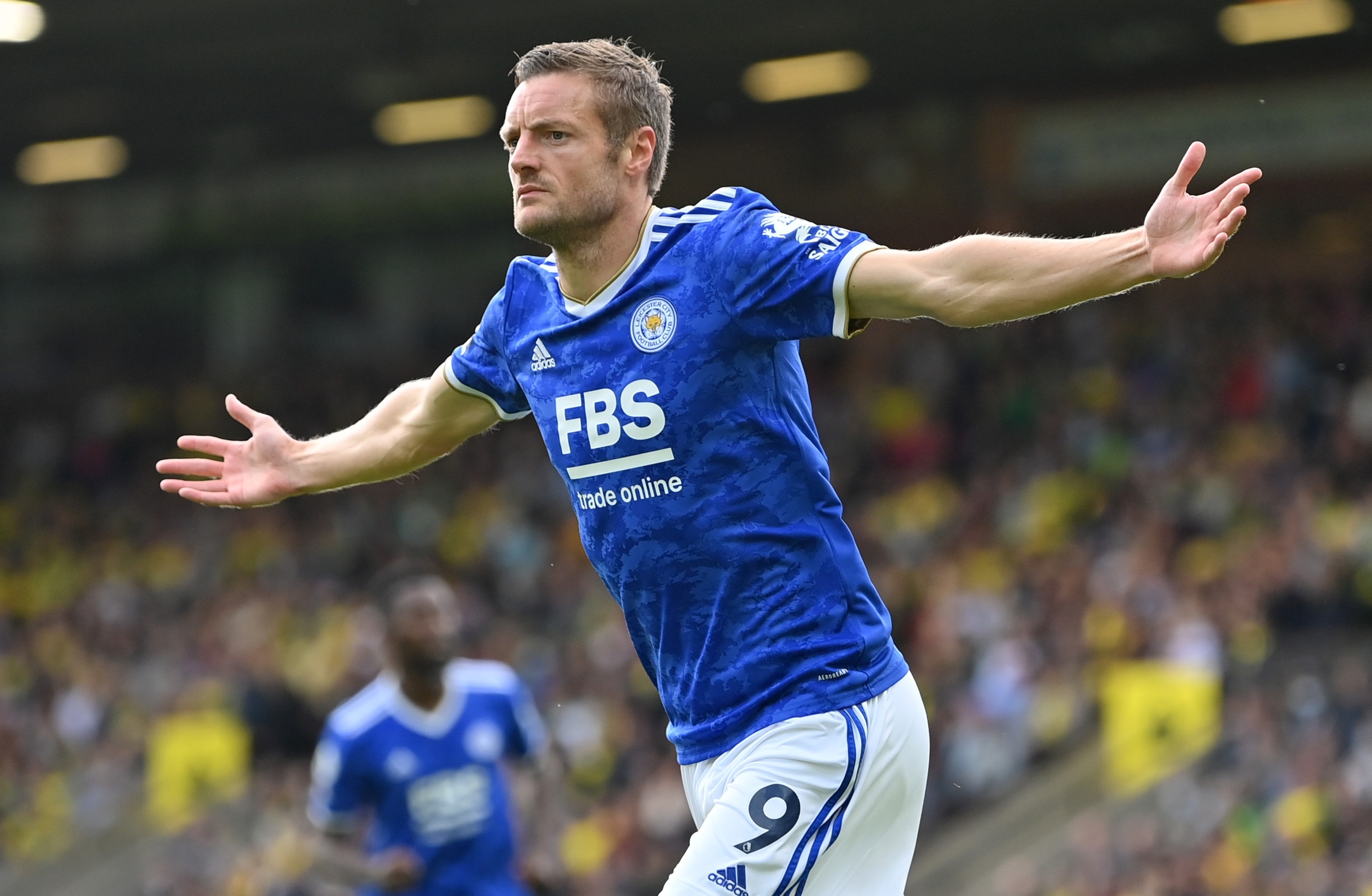 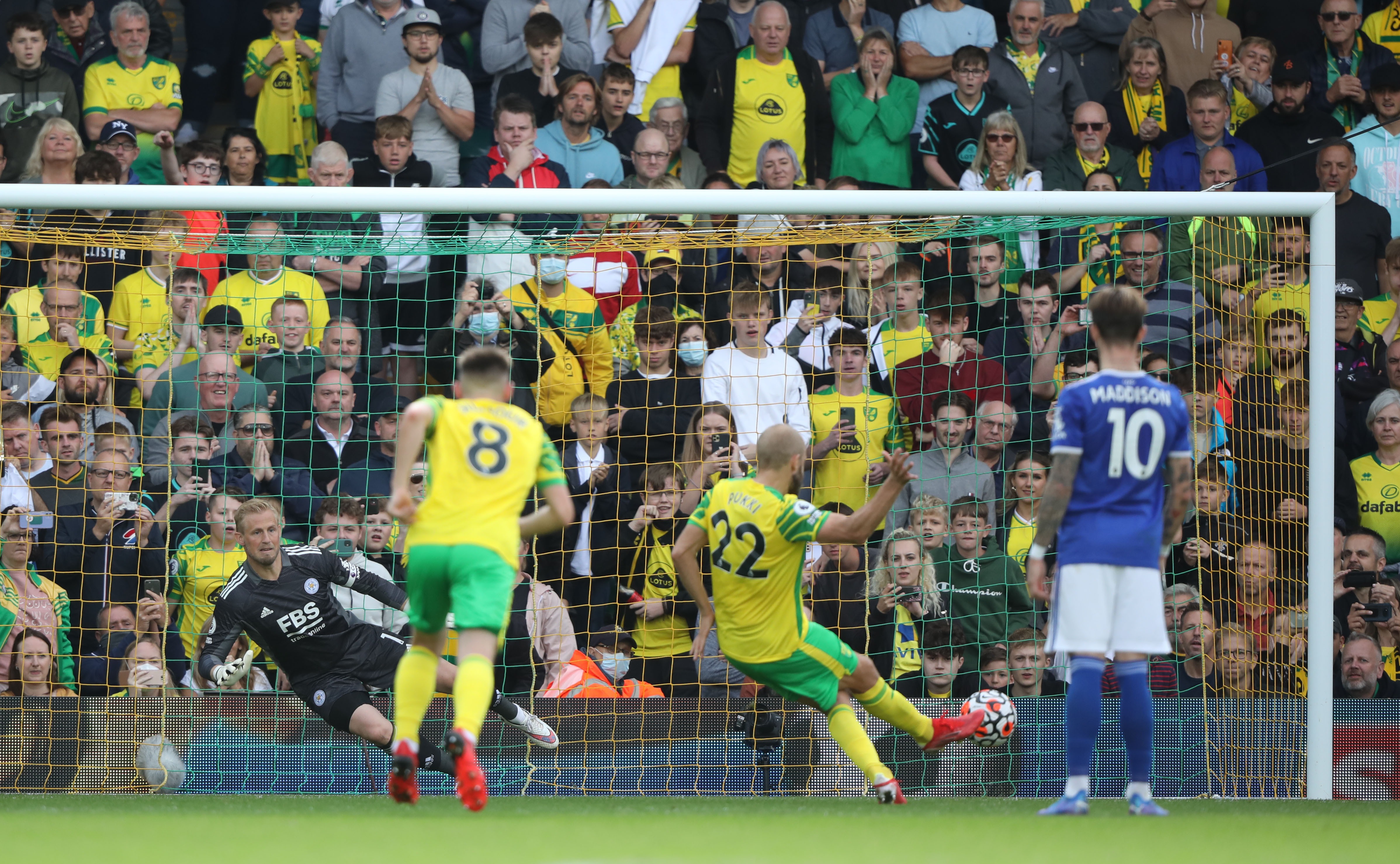 At the other end, Tim Krul produced an even better block to deny Vardy another goal.

But just when it seemed Norwich would go in trailing at half-time they were thrown a lifeline by Leicester’s loose cannon defender Caglar Soyuncu who gave VAR David Coote a decision to make by sliding in unnecessarily on Lees-Melou as he advanced into the box.

In a throwback to last season, we waited and waited for ref Robert James to reveal the call before he was finally asked to go to the monitor to see the replay for himself.

Why he did not go earlier is anybody’s guess.

But after viewing a few replays he eventually appeared to make the right call as he pointed to the spot.

And Teemu Pukki made no mistake with the penalty as he sent Schmeichel the wrong way for Norwich’s first goal in their eight Prem matches – dating back to July 7 last year when Emiliano Buendia netted in their 2-1 defeat at Watford.

Buoyed Norwich made a blistering start to the second half with Todd Cantwell and Lees-Melou each firing 20-yarders over the bar in quick succession.

Pukki then headed a Max Aarons cross straight at Schmeichel before the Canaries had a lucky escape when old boy Maddison blazed wide from five yards in a scramble following a corner.

But Leicester regained the lead against the run of play in the 76th minute when Vardy played in Albrighton, whose shot nicked off Williams on its way past Krul into the bottom corner.

Still Norwich refused to die and they thought they had scored a deserved equaliser three minutes later when McLean headed home a corner.

But their celebrations were cut short by VAR Coote, who correctly spotted Cantwell standing in an offside position right in front of Schmeichel.

Norwich still could – and should – have rescued a point but Andrew Idah shot wide from close range in stoppage time. 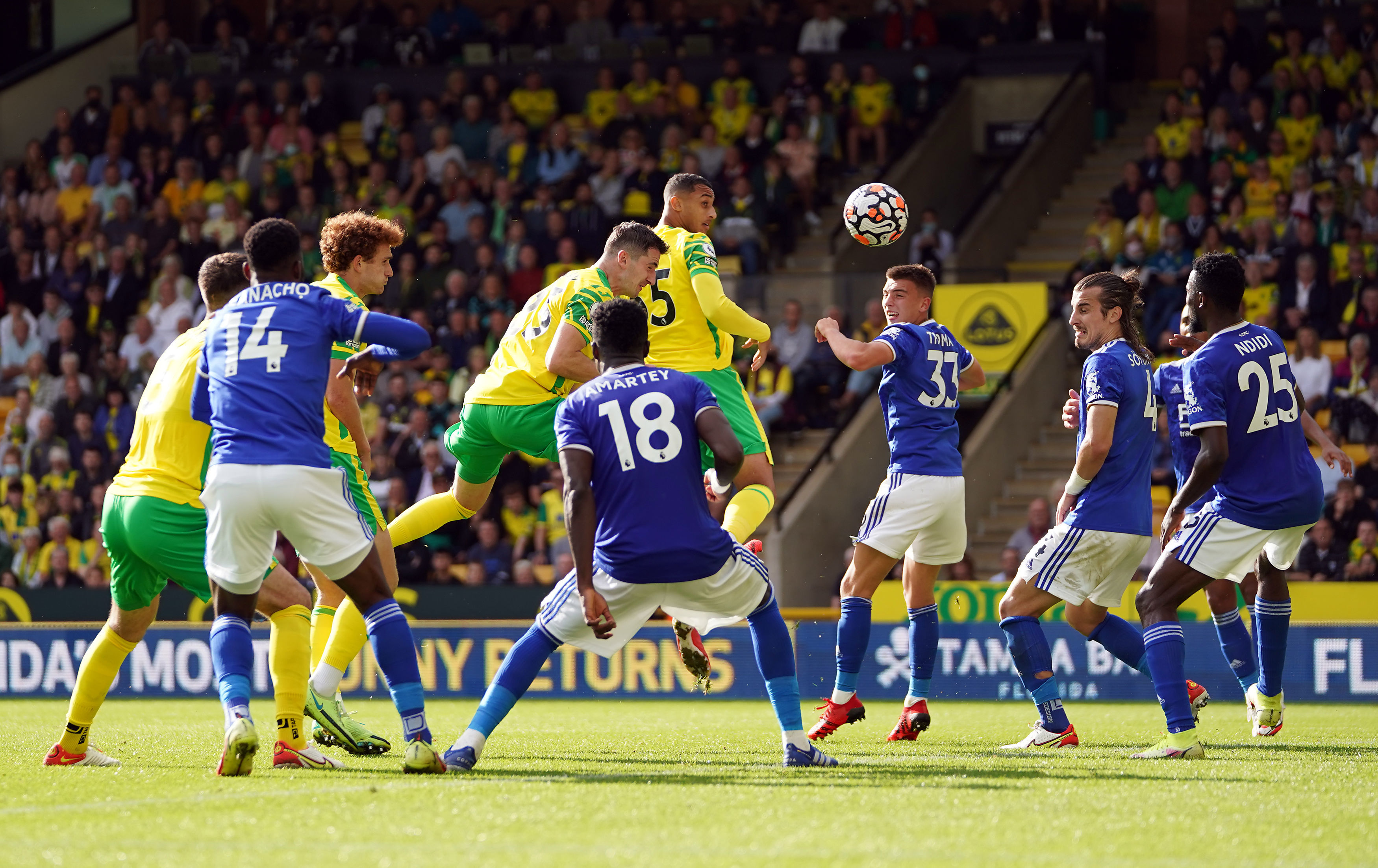 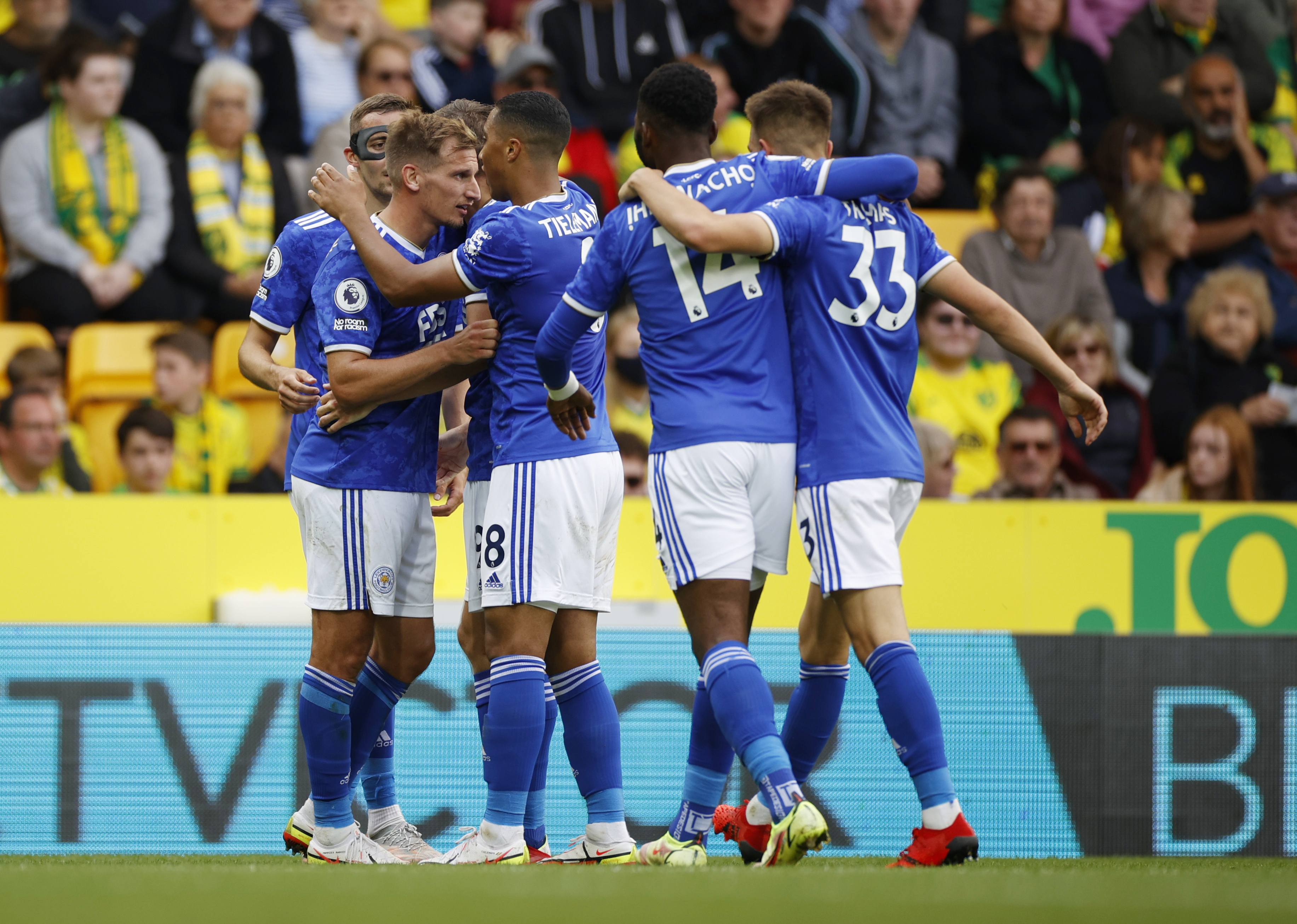