John Allen vehemently denies changing his riding action during Trap For Fools' controversial Mackinnon Stakes win and will welcome any questions from stewards about the race, claiming he has "nothing to answer for".

The former Irish jumps jockey expressed "shock" at the raids on the stables of his biggest supporter Darren Weir and a subsequent four-year disqualification for the trainer after three jiggers were found in the master bedroom of his Ballarat property. 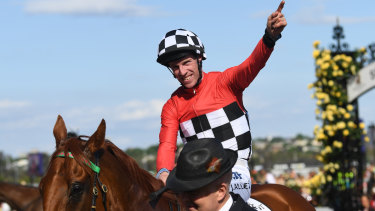 Nothing to worry about: John Allen on Trap For Fools.Credit:AAP

There has been no suggestion Weir used the electronic shock apparatuses on any horses, but the police and stewards probes are ongoing.

Social media users have engaged in baseless speculation that Allen might have made contact with the the neck of Trap For Fools, trained by Weir's Warrnambool-based assistant Jarrod McLean, during the Mackinnon Stakes.

McLean is facing his own charge of possessing a jigger on his Yangery property, but will fight the allegation stressing the implement was kept to move cattle on his property.

Asked about his ride on Trap For Fools in the Mackinnon Stakes, Allen told the Herald: "I've heard the rumours, but unfortunately that's just the way I ride. I don't think I changed my style particularly. I think they're trying to make a mountain out of a molehill.

I've got nothing to worry about. They can ask me questions, but I don't believe I've got anything to answer for

"I've got nothing to worry about. They  can ask me questions, but I don't believe I've got anything to answer for."

Trap For Fools staved off all challengers in the $2 million race, leading from start to finish to cap a remarkable Melbourne Cup carnival for Allen. He also won the Victoria Derby on the Weir-trained Extra Brut.

Racing Victoria refuse to confirm if they are looking into any races involving Weir or McLean horses from the spring carnival or prior to that, but the Herald revealed last week that the Grand National Hurdle was of high interest to investigators.

The well-backed McLean-trained Cougar Express downed the two favourites, which included a drifting Weir runner ridden by Allen. Stewards questioned the tactics Allen used in the race after the event.

Allen has enjoyed a stunning rise thanks to his union with Weir, who has previously lavished praise on the jockey as "one of the best horsemen" he has known. Allen has racked up four group 1 wins since reducing his weight to ride as a professional flat jockey.

But he faces his biggest challenge to continue his career without Weir's backing, with horses trained by the five-time Melbourne premiership winner and ridden by Allen amassing almost $5 million in prizemoney this season.

Allen has already had 360 rides for Weir in 2018-19. Dan O'Sullivan has been Allen's next biggest supporter with just seven mounts.

"I obviously rode a lot for Darren, but I'll just have to get myself out there a bit more," said Allen, who will miss Saturday's Orr Stakes meeting and return from a careless riding suspension next week.

"I've got good connections with owners through my association with Darren, and I'm hoping they stick by me. I probably just have to get myself around a bit more and keep working hard."

Trap For Fools will have his first start since finishing midfield in Perth's Kingston Town Classic when he contests the Carlyon Cup at Caulfield.

The horse was a lightning rod for controversy during the spring carnival. He was withdrawn from the group 3 Coongy Cup on Caulfield Cup day over concerns as to where the gelding had been stabled in the lead-up to the race.

He was then excluded from the Cox Plate by the Moonee Valley Racing Club committee on the basis that his form wasn't worthy of a spot in the elite field. He then ran second in the Moonee Valley  Cup before winning the Mackinnon Stakes on the final day of the  Flemington carnival.