Nurse starred on arguably the greatest college basketball team of all time at the University of Connecticut before she was picked 10th in the 2018 WNBA draft. 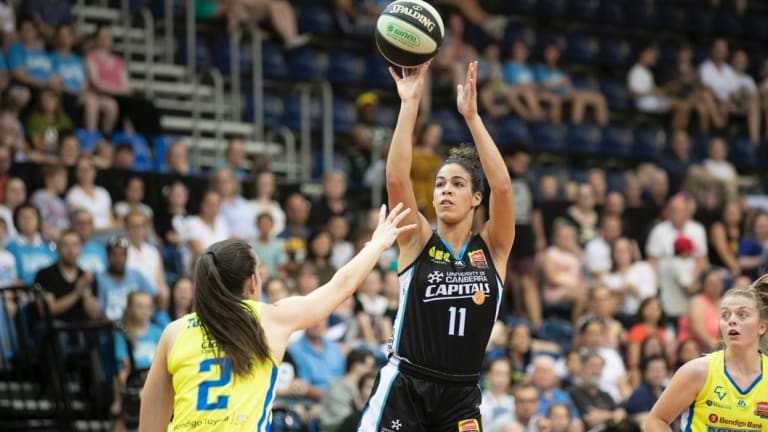 Capitals point guard Kia Nurse is fifth in the league on points per game this season. Credit:Sitthixay Ditthavong

Table-toppers Canberra have won six in a row and already punched their WNBL finals ticket for the first time in eight years.

They could secure finals home-court advantage with road wins against the Townsville Fire on Friday and the Sydney Flames on Sunday.

Capitals forward Kelsey Griffin leads the league in points per game and rebounds and is a near-certainty to be named the competition's most valuable player.

Nurse said she's been on more championship teams than she can count and believes the Capitals have what it takes to win their first title since the 2009-10 season.

"When you have teams that have more than one person that other teams have to guard it makes it a lot more difficult to get beat you and that's what makes the difference in championship runs.

"Absolutely [I feel like we can win it]. With our leadership and togetherness, it's definitely aligned with a lot of the championship teams I've been on."

Nurse knows the Capitals have what it takes to lift the trophy but warned complacency can stop the best teams in their tracks.

"Once you get to this time of the season it’s still the same thing, you’re still trying to put a ball in a hoop and score more points than the other teams," Nurse said.

"If you get too far ahead of yourself then you end up not being able to get to that [grand final] position and a lot of the time when you get into big tournaments, like the NCAA tournament, when you only have to win six games to win the whole thing, you have to win one game in a row six times.

"If you think of it that way then you’re more likely to focus on what’s in front of you and not what’s beyond.

"Where we are now and how we’re playing is great but it's what we expected and we need to continue building on our momentum."