Growing up in central Queensland, Corey Oates fancied himself as a cricketer. Then Cameron Munster would come on to bowl.

Oates may now rue Munster's left-arm seamers that shattered his cricket dreams – along with his stumps – in hometown Rockhampton during their schoolboy days. But the Queensland winger believes Munster can help him regain his rugby league mojo as the new Maroons fullback in July 10's State of Origin series decider in Sydney. 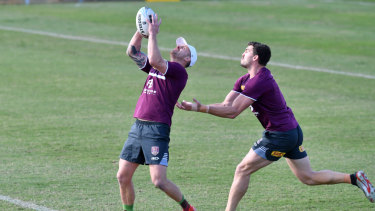 Cameron Munster (left) and Corey Oates have built up a sporting rivalry that goes back to their schoolboy cricket days.Credit:AAP

Oates would have been forgiven for grumbling over Munster's move from five-eighth to his preferred fullback position ahead of game three.

They had built up a sporting rivalry that goes back to their schoolboy cricket days.

Back then, Oates backed himself as a big-hitting batsman for St Brendan's College. Livewire seamer Munster played for Emmaus College.

"He was a little left-arm bowler and I was a left-hand batsman but he always got me out – it annoyed me," Oates said.

"Out of all people, it had to be him. If it was anyone else, I wouldn't care.

Yet Oates only had good things to say about Munster slotting in to the Maroons No.1 jersey for Origin III, replacing the injured Kalyn Ponga.

After some frustrating times with underperforming NRL side Brisbane, Oates reckoned Munster's game in the No.1 jersey may be just what he needed to spark him back into try scoring form.

"I am trying to get a good connection there with him," he said of Munster.

"We will work out what is beneficial for the both of us (at training this week).

"But he can throw a good cut-out ball. My hands will have to be warmed up right at the start of the game but I am looking forward to it."

While Oates is satisfied with his rugby league gig, the Broncos flyer admitted he still wondered what might have been in cricket before coming across Munster's niggling seamers.

"Yeah I did dream of being a Twenty20 cricketer and it would have been great," Oates laughed.

"That would have been fun, just flogging the ball for 20 overs.

"And in India there is a bit of cash out there (in the Indian Premier League), plenty of cash."

For the record, Oates begrudgingly admitted Munster was the better cricketer back in the day.

"But I will never tell him that," he laughed.