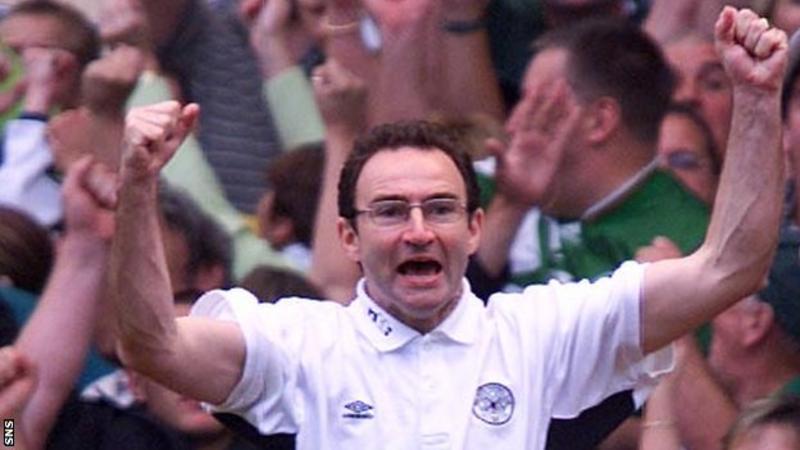 Celtic had won four trophies in 11 years when Martin O’Neill was appointed manager in 2000.

But the Northern Irishman’s arrival represented a major sea change in Scottish football, as he delivered three pieces of silverware in just over 11 months after arriving from Leicester City.

Celtic then went on to secure back-to-back titles for the first time in two decades but, on the 20th anniversary of his appointment, BBC Scotland charts O’Neill’s tenure.

Many of the squad that O’Neill inherited had recently been knocked out of the Scottish Cup at home by second-tier Inverness Caledonian Thistle and watched Dick Advocaat’s Rangers secure five trophies in two years.

But, as O’Neill told BBC Scotland in 2010, joining Celtic was an opportunity he “couldn’t turn down”.

“I thought catching up with Rangers would be pretty difficult,” he explained. “We opened our account on a Sunday evening against Dundee United at Tannadice and Rangers had already won the previous day.

“The first question I was asked as I did the pre-match interview was ‘now Rangers had won their opening game, is this do or die?’. He actually said to me, ‘If you don’t win this game, would that be the season over?’ I probably gulped at that point for the first time, certainly not for the last time.”

In Henrik Larsson and Lubomir Moravcik, he already had two talismanic figures and set about adding more brains, but also brawn. “We had some great players who had maybe lost a bit of confidence,” O’Neill said.

Joos Valgaeren’s signing and John Mjallby’s repositioning to centre-half from the middle of the park shored up defence and Neil Lennon’s mid-season arrival strengthened midfield. Chris Sutton became a fans’ favourite in attack.

“Lennon was a terrific footballer, he could’ve played for Manchester United or Liverpool, no question,” O’Neill told the BBC last month. “Sutton was phenomenal, he was absolutely fantastic for us, fantastic for Henrik Larsson.”

“Stiliyan almost left the club,” the Welshman explained. “Martin put a challenge to Stiliyan that there’s a player in there. Stiliyan became a massive, integral part of that team.”

Hartson identifies O’Neill as his best manager because he “took a chance on me”.

“Before I arrived, I had failed four medicals, including the famous one at Rangers in 2000,” the striker recalled. “I came back with over 100 goals.”

O’Neill highlighted in 2010 how his first two Old Firm games were pivotal to his success. Only one was a victory, but it was a big one. “That really did help,” he said of his derby debut 6-2 win. “The opening 15, 20 minutes was something you couldn’t have scripted. We were three goals up.”

Three months later, Rangers replied with a 5-1 victory – O’Neill’s first loss and one of only three in the league that season.

“We had to pull ourselves together after that,” O’Neill recounted. “Fighting back after that debacle at Rangers was far more important to us than the confidence we got from winning the first Old Firm game at Celtic Park.”

Celtic went on to win their first treble since 1969 and continued to dominate the league the following season and again in 2003-04.

No Celtic manager until O’Neill had led Celtic in the Champions League.

After overcoming Ajax in a memorable qualifier in 2001, his side took on Juventus, Porto and Rosenborg, culminating in an epic 4-3 win against the Italians. They had two more group-stage campaigns on his watch.

But it was the 2002-03 Uefa Cup run that was the pinnacle of his spell, as Celtic went all the way to the final.

Speaking about that run on Sportsound last month, former Celtic defender Jackie McNamara said of O’Neill’s team talks: “You’d hang on every word he’d say. They were inspirational. You felt great going out.”

Five years to the day after O’Neill was announced as manager, Celtic appointed Gordon Strachan as his replacement.

He enjoyed success of his own, as did current boss Lennon over two spells as manager. But it was O’Neill who had put Celtic back on the map, leading ultimately to their current dominance – 31 trophies this century, including 14 league titles.

“I loved Glasgow, my favourite time,” O’Neill told Sportsound last month. “I loved the football club that I worked for. I would never change those five years for anything in my life.”