TORONTO — He was brilliant, and then he was broken. He was valiant and then, in the split-second of one false move on a fragile muscle, he was a cautionary tale.

Kevin Durant should not have played in Game 5 of the NBA Finals.

We will talk for a long time about everything that happened here Monday night: the shock of Durant’s injury in the second quarter, the jubilation of a crowd in Toronto whose team had one hand on the trophy with three minutes to go and the utter dismay at how the Golden State Warriors dug a little deeper to send this series back to Oakland for Game 6. 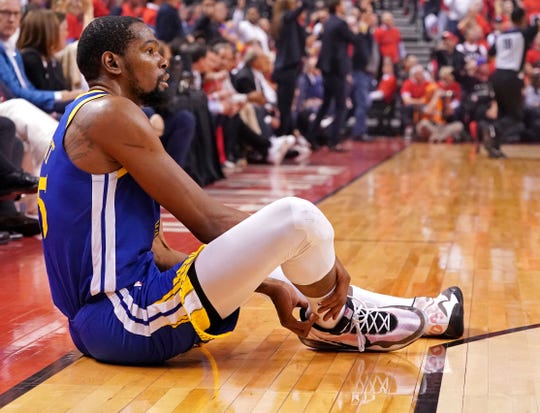 But the decision to play Durant, who suffered what might very well be a serious Achilles injury, is one that should haunt everyone associated with the Warriors no matter what happens the rest of this series.

“I don't believe there's anybody to blame, but I understand it's this world,” Warriors president of basketball operations Bob Myers said, trying to hold back tears. “And if you have to, you can blame me.”

It was a scene unlike anything that has ever happened at the NBA Finals. Steve Kerr, the Warriors coach, was clearly shaken, unsure how to process the pain of watching Durant go down and the pride of seeing his team somehow rescue a game that seemed lost to keep this series going.

Asked whether he had any regrets about bringing Durant back into the series after a month-long recovery from a right calf injury, Kerr said only that he would leave it to Myers. And when Myers got to the podium for a post-game news conference, he stared straight ahead and his voice shook. He said it was a “collaborative decision” to come back and that after multiple MRI exams and doctors visits, the team was confident that Durant was healthy enough to come back.

We’ll have to wait for the official diagnosis on Tuesday before we know how serious the injury was. And even then, the human body is such that we may never be completely sure whether the injury Durant suffered after playing 11 minutes, 57 seconds of basketball was caused because the one he suffered a month earlier with the same leg hadn’t fully healed, leaving his Achilles vulnerable to a tear.

But it sure seemed that way, didn’t it, as he immediately grabbed at his Achilles after a non-contact play where he tried to make a lateral move with the ball.

Kevin Durant seen in a boot and with crutches. #NBAFinalspic.twitter.com/RVMrhXbJeP

“I really felt for him,” Toronto Raptors coach Nick Nurse said. “I know he probably wasn't 100 percent and gave it a shot and just made kind of a move on his own and went down kind of on his own without a collision or landing on something, so you knew it was probably not good.”

Now here’s where we offer all the caveats that the details of the calf strain Durant suffered on May 8 were never revealed publicly, and Golden State’s highly experienced medical staff had far more information and training than those of us in the peanut gallery.

Though Myers said they were two different injuries, he acknowledged he didn’t have the medical expertise to know whether they were related. That’s true for most of us.

This is also true: Doctors can make mistakes, and players can push themselves too far or talk themselves into a bad decision when they’re feeling pressure to play.

And how could Durant not have felt that after the Warriors fell behind 3-1 in the series and it seemed they had no chance to come back without him? How could he not have felt it when Klay Thompson fought through a hamstring pull and Kevon Looney got a second opinion on a cartilage fracture in his chest that was supposedly going to keep him out of the series? How could a player who doesn’t ignore anything written or said about him possibly avoid the reports that there was frustration within the locker room that hopeful updates about his progress weren’t being realized on the court?

“Kevin Durant loves to play basketball, and the people who questioned whether he wanted to get back to this team were wrong,” Myers said. “He’s one of the most misunderstood people. He’s a good teammate and a good person. It’s not fair.”

In the end, the idea Durant was somehow soft because he couldn’t make it back onto the court until Monday was always ridiculous. If Durant could have played, he would have been out there in the first four games. His body didn’t let him.

And if the noise somehow played any role in Durant coming back before his body was ready to compete, we all need to own some of that. NBA careers aren’t forever, and the discourse around injuries — which often includes some romantic tough-man idea of the way things used to be — needs to change.

If the worst happened and he tore his Achilles in a way that will rob Durant of one of the prime years of his career, it’s a major failure by everyone. Yes, including the Warriors.

“I don’t think there’s anybody to blame, but I get it,” Myers said. “That stuff happens. I hope nobody does (place blame).”

You can say injuries are fluky, and to an extent that’s true. But this one didn’t seem like it. The same leg, the same part of the leg after a month of drama and mystery that never seemed to lead anywhere good.

Durant hadn’t played or done significant basketball activity for a month. It’s hard to view dropping him into the middle of the Finals at that intensity and speed on a leg that wasn’t good enough to play on 72 hours earlier as anything other than a risk.

“He has tried to fight his way back and put his body on the line for those guys and that franchise,” Raptors guard Fred VanVleet said. “You just hate to see that. We feel for him. It’s very unfortunate. It sucks.”

Maybe the long-term outlook for Durant will be OK. The offseason is coming, plenty of time to rest. No matter what happens, he’ll go into free agency and get a max contract somewhere, even if he is out to start next season.

But when bodies start to break down in the NBA, intentionally accelerating the damage can be a dangerous game. Let’s just hope what happened Monday didn’t cost Durant more than a chance to rescue a title.