MIAMI GARDENS, Fla. — Eight years ago, Alabama brought one of the most talent-laden teams in the modern history of college football onto this very field and needed all of a quarter to humiliate Notre Dame in a national championship game.

If you had been in Hard Rock Stadium that night, the suggestion that Alabama would be back here eight years later with an even more terrifying team might have seemed absurd. Nick Saban, in winning his third national title in four years back then, seemed to have this sport figured out in a way nobody had ever really figured it out. How much better could it really get?

You couldn’t even envision such a thing. 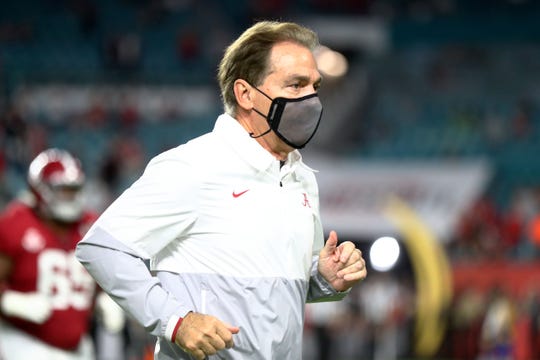 Alabama 2.0 officially arrived as a championship product Monday night, re-asserting itself as the unrivaled best program in college football, toying with a very good Ohio State team and inspiring a relapse of that familiar heartburn opponents felt a decade ago when nothing short of perfection would be good enough to compete.

With Monday’s 52-24 win, Saban’s reinvention of Alabama football from a python that squeezes the life out of opponents to a rampaging cheetah that cannot be caught is now complete. With national title No. 6 secured (and Saban’s seventh overall including one at LSU), Alabama has never seemed more untouchable.

If Saban’s first decade proved what can be done when you combine Alabama’s resources with elite talent and a head coach’s maniacal drive — Saban famously complained once that playing in the national title game cut into his recruiting time — the final chapter of his career is going to show us how thoroughly he has hacked this sport.

With an otherworldly offense that made everything look easy — not only Monday but all season — Alabama hasn’t just gotten back on top. It’s re-opened a sizable gap on the small handful of programs that have enough talent to win a national title in the first place.

Once again, the Ohio States and Clemsons and LSUs are going to have to figure out a way to catch up. It won’t be easy.

Because of all Saban’s gifts as a coach, his greatest has now been revealed. At age 69, after spending decades trying to grind opponents to dust, he has embraced a frenetic, hyper-aggressive offensive style as the best way to win championships. He’s not the first coach to arrive at that conclusion, but once he did, he executed it better than anybody, pairing the best skill talent with a system designed to squeeze every play possible out of it.

The reality for the rest of college football is this hellacious team that averaged just shy of 50 points per game is merely a culmination of what Alabama had been building for the last three years. From the moment a relatively unknown freshman receiver named DeVonta Smith caught a pass against Georgia three years ago to win Saban’s last national title, this was the destination. Now the fun really begins.

As always, there will be change at Alabama.

Offensive coordinator Steve Sarkisian, who pretty much pitched 13 perfect games this season, is headed off to Texas. Smith leaves as a monster of a Heisman Trophy winner, whose first half alone against Ohio State — 12 catches, 215 yards and three touchdowns — would have been considered an all-time great performance in a championship game. There will be offensive linemen who need to be replaced, a couple of high-level running backs who depart. Quarterback Mac Jones, who has been chronically underrated until completing 36 of 45 passes for 464 yards and five touchdowns (with no interceptions) against Ohio State, is likely gone as well.

In December, Alabama signed three of the top eight receivers in the class of 2021, got a commitment from the top-ranked running back and has last year’s top quarterback recruit in Bryce Young waiting in the wings.

Saban has always recruited great players, but once he committed to a spread offense that was going to let them put up big numbers along with their championships, what advantage does any other program have?

Of course Alabama isn’t going to win every game until the end of time. Nobody does. But for as much talent as they’ve compiled at Ohio State and as much winning culture as they’ve built at Clemson and as much excitement as they’ve got with a new coach at Auburn and as much momentum as Texas A&M built this season, how do you realistically catch back up with this?

At least with the old Alabama, you could hope for missed field goals and turnovers. With this version, the margin for error seems endless.

Ohio State showed up Monday in a tough spot. Two starting defensive linemen were out due to COVID-19 protocols, running back Trey Sermon got hurt on the first play of the game and quarterback Justin Fields seemed to still be bothered by the hip/torso injury he suffered in the Sugar Bowl.

Even under the best of circumstances, this was going to be a heavy lift for the Buckeyes — and these were far from the best circumstances. But would it have really mattered?

Alabama never really went away the last couple years, but the Crimson Tide is emphatically back on top of the sport. And just like it did eight years ago in this stadium, the horizon for its dominance once again seems limitless.