Not even the NFL can overcome reality.

The league's return has given fans a blessed dose of normalcy, allowing us to forget for a bit that the country remains very much in the grip of a pandemic. But news Tuesday that the Tennessee Titans and Minnesota Vikings are suspending activities is a sobering reminder that COVID-19 is a highly contagious virus and even the most stringent of protocols can’t eliminate completely the risk of spread.

The Titans announced Tuesday that they’d had eight positive COVID-19 tests, three by players, five by other team personnel. This after Tennessee outside linebackers coach and defensive playcaller Shane Bowen did not travel to Minnesota for Sunday's game because of COVID-19 protocols. 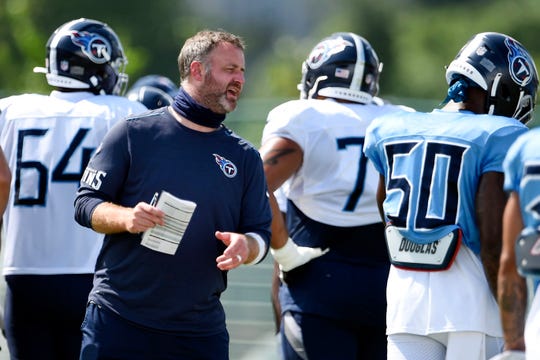 The Vikings said they have had no positive tests.

That the NFL had made it this far without an outbreak was impressive, a testament to how seriously everyone involved has taken both the disease and the protocols to guard against its spread. Everyone, from Roger Goodell to practice squad players, knows how much is riding on this season, and no one wants the NFL to repeat the debacles Major League Baseball and college football have had.

"If we get COVID," Green Bay Packers center Corey Linsley said, "that's money out of our pocket."

So players pushed to extend daily testing, and the league agreed. Teams retooled their practice facilities and stadiums to allow for social distancing. The NFL slapped heavy fines – $1.75 million’s worth last week – on coaches who couldn’t figure out how to wear their masks properly.

But the outbreak was, in many ways, inevitable. If it wasn’t the Titans, it would have been another team.

"This is not unexpected; as (NFL chief medical officer Allen) Sills and others have emphasized, there will be players and staff who will test positive during the season," Goodell said in a memo sent Tuesday afternoon to the 32 teams.

Here’s a copy of the memo @nflcommish sent to 32 teams today: pic.twitter.com/kHJ3GeY8HX

There are too many people – players, coaches, support staff – involved in a sport where close contact is inherent. The odds were always high that someone was going to slip through the cracks of the NFL’s rigorous, daily testing program because of low viral loads and a delay in results.

This, for those thinking the mask fines were overkill, is why the NFL is so adamant that sideline personnel wear masks.

Most significantly, the NFL, unlike the NBA, WNBA, NHL, Major League Soccer and NWSL, is not playing in a bubble. No matter how much players and coaches limit their interaction with the general public, there will be some, and that carries risk – greater in some places in others.

It was just Monday, in fact, that Packers coach Matt LaFleur expressed concern with skyrocketing cases in and around Green Bay. The area is now one of the nation’s hot spots, with Brown County reporting a seven-day rolling average of 77.44 positive cases per 100,000.

“All it takes is one guy,” LaFleur said. “If one guy gets it, it can take down this whole operation.”

That doesn’t mean the Titans outbreak has to be the beginning of an abrupt end to the NFL season.

Baseball’s future looked bleak back in early August, when the St. Louis Cardinals shut down for two weeks and the Miami Marlins needed “Hi! My name is” tags because of roster churn due to COVID outbreaks. Yet the league got things figured out, and playoffs began Tuesday with the full season completed.

The NFL has less flexibility with its schedule; you can’t eliminate byes or ask teams to play two games in one week, not without putting player’s health at risk. But it could, if the Titans really are shut down until Saturday, play a Monday night doubleheader.

There also is an off week between the conference championships and the Super Bowl –an off week that hasn’t always existed. There’s no reason the NFL couldn’t eliminate it, pushing the wild-card and divisional rounds back a week and using that now open week after the regular season ends for makeup games.

But the NFL cannot afford many more outbreaks without throwing its competitive balance too far out of whack. Which means it will have to double down on its protocols, which already are arguably the most stringent of any non-bubble league. Goodell also recommended that teams "revisit the steps" they've taken to minimize close contacts, particularly while traveling, and "review their procedures" for bringing in potential new players.

I'd take it even further. Instead of fines for coaches who can’t wear their masks properly – yeah, Sean Payton, still talking to you – it now needs to be automatic expulsion from a game. If players or coaches are found to have violated protocol or were reckless in their off hours, suspend them for the next game.

Harsh? Yes. But COVID-19 isn’t going to magically disappear any time soon, and the effects of an outbreak spread beyond one or two locker rooms.

Playing the NFL season during a pandemic was never going to be easy. Even if the NFL managed, until now, to make it seem that way.