The best sign that Jeff Horn might be officially done as a welterweight has come from his wife Jo, who has given a resounding tick of approval to his improved moods now he has to obsess less over his calorie count.

It could answer one part of the Horn puzzle in 2019. There's still little clarity on who he may fight and when, although with another baby on the way for the couple it will only be twice. 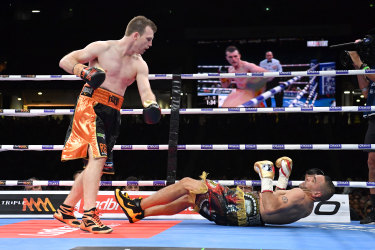 Over and out: Jeff Horn was impressive fighting at a heavier weight in the mismatch against Anthony Mundine.Credit:AAP

An outing in May and then again closer to Christmas would be ideal, and both must count. There will be no repeat of the easy rebound fight in which he crushed Anthony Mundine in 90 seconds, nor does it seem that social media taunts for a rematch with Manny Pacquiao will amount to much more than light entertainment.

His promoter, Dean Lonergan, would love Horn to challenge for a world title before the year is out and, at the very least, his pair of fights must position him to make a challenge early in 2020.

More and more that challenge is looking like it would be at a heavier weight division than the one he famously occupied when he upset Pacquiao for the WBO welterweight title, only to defend it once and hand it over to the almost peerless Terence Crawford.

"I like him at super welter or middleweight," Lonergan said. "I thought he looked fantastic even though it was hard to tell in 90 seconds. Certainly at welterweight he always looked drained. From his wife Jo’s point of view, he’s a lot less grumpy and more comfortable. You don’t have to starve yourself.

"It’s having the right fight in the right place at the right time. We’re only going to fight twice this year so they have to be meaningful. That means those are fights that get us to a mandatory position or a world title fight."

But Lonergan's phone isn't exactly ringing off the hook after a glimpse of what Horn could do in the meatier divisions, even if it was against an outmatched veteran in Mundine, whose pleas for a rematch haven't even registered in the Horn camp.

For all the ridicule Horn was given from American critics after his performance against Crawford, the Nebraskan went on to dominate his next opponent Jose Benavidez Jnr and is widely tipped to do the same to Amir Khan.

Horn's effort may yet be reappraised and the strength and footwork he showed at 71kg (four heavier than the welterweight limit) has him pegged as a rough, aggressive fighter who would be unlikely to give anyone a simple night outside the sport's elite.

"After doing what he did against Mundine, there are a lot of people wondering whether fighting Jeff is a particularly good idea. He’s all action and he’s hard to beat, and he draws a lot of attention. I’d love to have a fight for him against an American, but we’ll see what transpires," Lonergan said.

"The people ringing me are in the media. Not many people are ringing me and saying ‘Jeff Horn, that’s a great fight for us’ because they know it’s going to be very tough. It would be nice to take some phone calls, but that’s not how this business works."

A bout with England's Kell Brook at 154 pounds was mentioned and, after learning important lessons from their fruitless trip to Las Vegas last year, the Horn camp are willing to get on the road again if it means a shot at another genuine world title belt.