As Australia prepare to play a first Test at Melbourne since a docile pitch was given a "poor" rating a year ago, two of the side's pacemen are expecting a journey into the unknown against India on Boxing Day.

The MCG moved to improve the playing surface after receiving the negative rating from the International Cricket Council following last year's drawn Test against England, when only 24 wickets fell in five days. 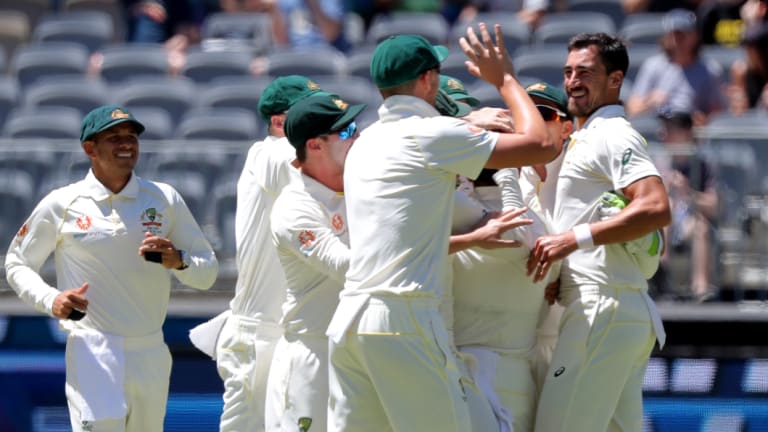 Different test: Mitchell Starc is mobbed after capturing the wicket of Hanuma Vihari in Perth. The deck in Melbourne is not expected to provide as much assistance.Credit:AAP

Pace spearhead Mitchell Starc admitted he did not know how the new pitch would behave ahead of the third Test, but Peter Siddle is confident it will at least yield a result.

"I didn't play last year. I had to watch from the side and it didn't do a thing for five days, so hopefully they've sorted it out," Starc said.

"It sounds like they've been trying a few things with the [Sheffield] Shield cricket there in the first few rounds. I think it may be a surprise, what they actually dish out next week."

New curator Matt Page has tried to inject more life into the ground's pitches and Siddle was optimistic that the series against India, currently tied at 1-1, would not still be level ahead of the final match in Sydney.

"I played a couple matches ago when I got back from the UAE against South Australia and it was actually a good cricket wicket," the 34-year-old told sports radio station SEN.

"He [Page] knows what he's got to do now leading into the test match.

"It's going to be a good one and I think the boys should be excited and there's definitely going to be a result wicket I think, going by what's happened in the first couple of Shield games this season."