PORT ST. LUCIE, Fla. — Pete Alonso, the most intriguing prospect in Mets camp, spent last year putting together one of the most productive minor-league seasons in Mets history. He started his off-season by getting engaged to be married. His next task: winning the four-man competition to start at first base on Opening Day.

“I want to force someone’s hand,” he said. “I want to come in here and be the best option.”

Alonso, 24, has a history of making a strong early impression. His first word as a baby, he said, was “ball.” At the Futures Game during All-Star weekend last summer, he rerouted a 95 miles-per-hour pitch from the Phillies prospect Adonis Medina 415 feet for a home run to left. At the Fall Stars game in Arizona in November, he sent a 103 m.p.h. fastball from the Blue Jays prospect Nate Pearson over the fence in straightaway center.

“I didn’t even know how I hit it,” Alonso said. “I just closed my eyes and touched it.”

And in the Mets’ spring opener on Saturday, he did it again: hitting a home run on the first pitch he saw.

Alonso, a 6-foot-3, 240-pound infielder who was drafted in the second round in 2016, opened eyes all last year, proving he had rare power. But he still has questions to answer: Is his defense strong enough to start him at first base, and, beyond this spring, can he become a right-handed anchor in the heart of the Mets’ lineup for years to come?

“The only thing I can control is with my own two hands: hit the ball, playing good defense,” Alonso said. “That’s all I can do. Whatever happens, happens.”

He’s done the first part supremely well. Between Class AA Binghamton and Class AAA Las Vegas last year, he hit 36 home runs with 119 R.B.I. and a .975 O.P.S., pushing him past his fellow farmhand Dominic Smith on the organizational depth chart.

Still, the Mets, who were out of contention, declined to promote Alonso to the majors during September call-ups, citing his defense as one area that needed improvement. Alonso’s agents, Adam Karon and Tripper Johnson, publicly questioned the decision, calling it “disheartening for Peter after producing an historically great season.”

He stayed busy in the off-season. After proposing to his girlfriend, Haley Walsh, in November with a ring he bought in Vegas, he went back to work on his fielding. He dropped 12 pounds during winter workouts with Steven Negron, a former minor league infielder. Before showing up early for spring training, Alonso sent videos of his defensive workouts to General Manager Brodie Van Wagenen, hoping to beat out Smith, Todd Frazier and J.D. Davis for the first-baseman position. 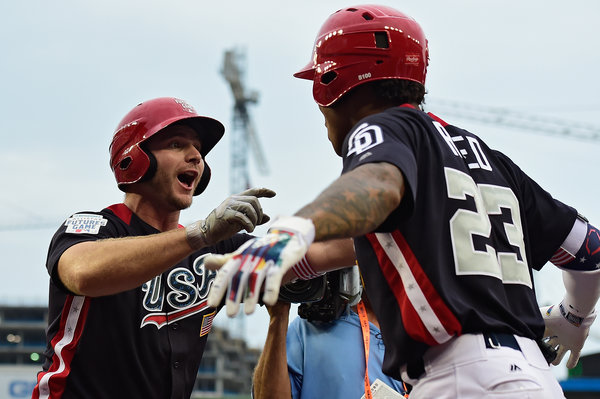 “As much as the hitting is fun to watch, we had a pretty good idea what he could do offensively,” said Van Wagenen. “His defensive strides have been pretty remarkable.”

Manager Mickey Callaway called Alonso “probably the most improved defensive guy” that the Mets have seen in some time. Callaway recalled being chided by a member of the grounds crew last spring when parts of the infield were chewed up early one morning. Callaway knew Alonso had been taking extra ground balls.

“He actually ruined the field,” Callaway said. “The groundskeeper comes in and goes, ‘Hey man, what are you doing to the field?’ I’m like, ‘That’s Pete Alonso.’ He’s just out there working. That’s who he is. He’s going to continue to improve no matter where you put him.”

Growing up in Florida, Alonso played football and lacrosse until after his freshman year in high school, when he focused on baseball. At the University of Florida, where he played three collegiate seasons, his big bat and uncommon toughness caught the eye of Brad Weitzel, a former scout for the Minnesota Twins who was a coach on the Gators’ staff. Alonso sustained a broken nose after a ball he hit in the batting cage ricocheted off a pole and struck him in the face. But he refused to sit on the bench long, returning to the diamond with a protective mask over his batting helmet.

“It was frightening for me,” his mother, Michelle Alonso, said. “Crazy Peter wanted to play. It was still technically broken. He likes to keep me on my toes.”

Weitzel said he watched Alonso “take over the program as a leader.” One day during the first spring after Alonso had played professionally, Weiztel noticed Alonso did not pick up a bat during a workout with younger Gators — a departure from the days when he would shrug off defensive work in favor of working on hitting.

“I told him there were days when he was at Florida that he didn’t know where his glove was,” Weitzel said. “He knew that professionals are paid to win. He was growing up.”

Alonso and Weitzel continue to check in on each other. Weitzel counseled Alonso through his frustrations last fall, and explained that it was a business move for the Mets. When the Gators lost back-to-back games last week, Alonso called his old coach.

For all the focus on his defense, however, Alonso has continued working on his hitting. Whether he can turn into a towering, Aaron Judge-like presence in the Mets’ order will only become clear with time, but Alonso was still embracing new challenges last week. First, he faced Jacob deGrom, the Cy Young Award winner, in batting practice. Then, he squared off against the hard-throwing Noah Syndergaard.

“It’s good to see the best,” Alonso said of trying to adjust to the majors. “It’s just all about staying disciplined, being able to capitalize. I’ve got to be ready for everything.”