Ingles had 11 points, seven assists, three rebounds and three steals for the Jazz, while countryman Dante Exum came off the bench late to chip in with seven points. 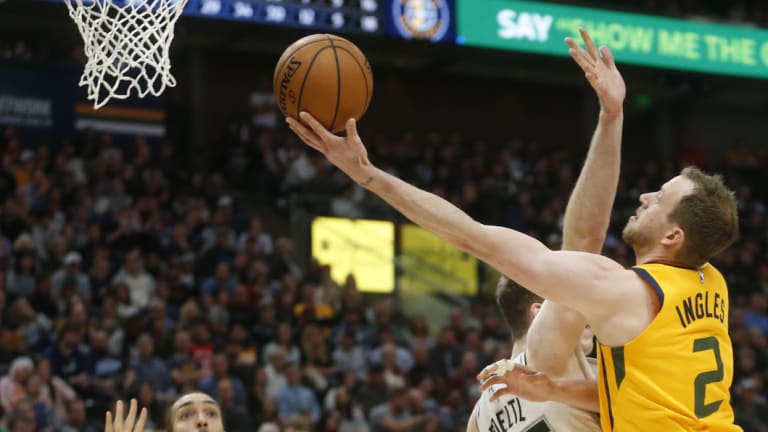 Their fellow Australian Patty Mills had eight points for the well-beaten Spurs.

Ingles was part of an even scoring spread from the Jazz, who also got 20 points from Donovan Mitchell.

Ingles' growing contribution hasn't gone unnoticed in the US, with Michal Kruger writing in sportingnews.com that the Australian's selfless, team-first ethos has given way to a greater willingness to shoot.

"Having torched two of this season’s title-favourites for 27 points apiece, it’s fair to say that Joe has worked on his craft," Kruger writes in an article headlined: “Poetry in slow motion: The effectiveness of Joe Ingles’ unassuming Australian style.”

Indeed, Ingles' repuation has also undergone an evolution, from appearing as a "40-year-old farmer" to an unexpected asset. Not that his Twitter feed always acknowledges the change. "Anything that's like a boring, receding-hairline white guy is pretty much what I get," Ingles says of the comments he gets on his Twitter feed.

Meanwhile, Rudy Gobert had 18 points and 10 rebounds, while veteran guard Kyle Korver scored 15 in his first home game since being traded to Utah from Cleveland.

Utah made a franchise record 20 3-pointers to blow the game wide open.

Damian Lillard scored 25 of his 33 points in the second half as Portland tried, but failed, to rally from a deficit that was mostly double digits through almost all the first three quarters.

Darren Collison had 23 points and eight rebounds for Indiana.

Buddy Hield (20 points) was one of seven Sacramento players in double figures as the Kings beat the Phoenix Suns 122-105.