Angry Eindhoven stars protested in vain as the crowd intervention denied them a late leveller after they had trailed 2-0.

And the 2-1 loss ended PSV's perfect start of 13 straight wins.

PSV looked likely to tuck the rebound in as Feyenoord floundered around – but a second ball was then hurled right into the mix from behind the goal.

Referee Serdar Gözübüyük immediately blew up for a drop-ball – sparking fury from the visiting players. 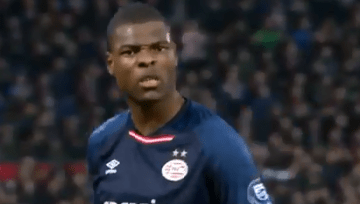 Gözübüyük then added to Eindhoven's angst by not allowing them to compete for the drop-ball AND not dropping it close to goal.

Holland news website ad.nt reported Van Egmiond as saying: "If an object is thrown into the field – a ball or, for example, a water bottle – and there is no obstacle to the game, you can simply continue. 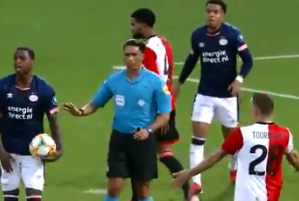 "If there is an influence, such as yesterday at Feyenoord-PSV, then you have to blow up and resume the game with a referee ball.

"[But} The chance was not gone yet, then you can not just give the ball to one party.

"The ball should have been offered to two parties at the place where the game was stopped."

A small balls-up to round off a big one, then.