Seriously, does sport get much more historically significant and wonderful than that win in the US Masters by Hideki Matsuyama? For the better part of a century, Japan has been waiting for one of theirs to win a major, any major, and Matsuyama opens the account by winning the freaking Masters!

You may recall the Japanese golfer first came to international attention at the 2017 PGA Championship at Quail Hollow, when co-leading the field after two rounds, he then fell apart to bogey five of the final nine holes and could manage only a tied-fifth, whereupon he buried his head in his hands and cried on the shoulder of the first Japanese reporter to ask him a question, even as the cameras rolled. 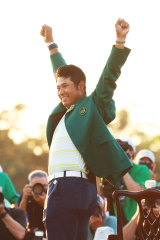 And his whole crew seemed the same.

Oddly the most wonderful footage of the whole thing wasn’t even a shot by Matsuyama. It was an act by his caddie, Shota Hayafuji, after Matsuyama had drained the winning putt. While Matsuyama instantly becomes the epicentre of a sea of celebration, the caddie – with no clue that a sole camera has stayed on him – goes over to the hole to place the flag back in it.

After he does so, he removes his hat and bows, almost as if he is saying thank you to Augusta.

Look, there’s a cultural gap there that I can’t quite bridge, so I am not sure. I only know there was something humble, magnificent, and different about it.

Bravo Hideki Matsuyama and your caddie. And congratulations Japan.

Those two have done you proud.

Tommy Raudonikis anecdotes? We’ve seen a few in the past 10 days or so, most of which we are familiar with. But this letter to the editor at The Sydney Morning Herald, from Michael Costello, Ashfield, contained a line totally new to me, and I’ll bet to you.

“It was a Sunday afternoon in winter and the Magpies had just suffered a narrow loss at Lidcombe Oval. The ABC commentator button-holed the captain and asked him if he was disappointed. ‘Disappointed?’ rasped Tommy. ‘It’s like going to bed and dreamin’ you won a car in the lottery, but when you wake up all you’ve got is a horn’.”

Everyone after me: They don’t make ’em like Tommy any more.

Cronulla Sharks CEO Dino Mezzatesta posed an interesting question to colleague Andrew Webster on Thursday, defending the debacle of the departure of their popular and successful coach, John Morris, earlier in the week.

He began by conceding it had been a tad on the messy side of things, before going on.

“But tell me one in the history of this code that’s been done well,” Mr Mezzatesta asked. “When is it an easy decision, in any business? When you make these calls, you do so because you know what’s right for the long-term viability of the club.”

Hmm. I’ll have a go at answering your question, Mr Mezzatesta, if you can provide a satisfactory answer to mine.

In the history of premiership rugby league, can you ever recall a popular coach presiding over an improving side, effectively getting a “Don’t-Come-Monday” in EARLY APRIL, and so constructing things that you leave your side with a lame-duck coach for the rest of the year, before the new bloke you have selected can get there? 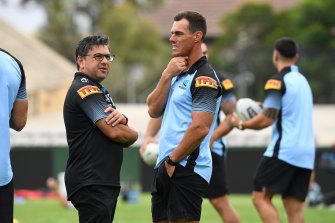 You’re right, sackings are messy by their nature, but this one was a post-war record for ugliness and shambolic manoeuvres, all to get rid of a coach who, on the previous Saturday night, had got his side within a tail feather – let me see you shake one – of a fabulous upset victory over the Roosters.

Mr Mezzatesta added, however: “If someone can share with me what a better process is, let me know.”

Over here! I’ve got one.

You give the bloke you’ve got the time and space to prove what he can do. The only reason you would make such a drastic sacking is when you have a coach who is providing a series of disasters with 30- and 40-point drubbings every week, with players who look like they’ve lost interest. This year the coach doing that in the first part of the season was Des Hasler, not Morris.

TFF did a whimsical tweet on Friday: “She’s French, in her late 70s. He’s Australian, early 80s. They’re on table of local cafe next to me, as is often case. They’ve been married 55 years. Their wine just served. Red for him. White for her. As always, they clink glasses and smile at each other, holding hands. Lovely!”

It drew this response, from @Ybr_ian:

“The loveliest thing I have ever seen was on a golf course, of all places. REALLY old bloke 90s barely able to stand was hitting some balls. His wife on crutches was teeing them up for him. I was awestruck, such a beautiful sight.”

Oh all right, one more Alan Jones howler, then we’ll stop. Last week, the former Wallabies coach added the name of Amy Perrett to the long line of woman he has verbally attacked. Ms Perrett, as you know, is a fine referee who happens to be female, and she was in charge of the terrific Rebels versus Reds match.

According to Jones, “Amy was completely out of her depth … struggled with decision making in the tackle area … things happened too quickly for her and she made a couple of poor calls. Amy Perrett should never have been given the job because she is not one of our top referees.”

His assertion was that she only got the job because of Rugby Australia’s “wokeness”, appointed because she was a woman.

Get it? Just a standard-brand Jones misogynist comment. Apparent in the ’80s, galling in the ’90s, it is tragic in the third decade of the 21st century. 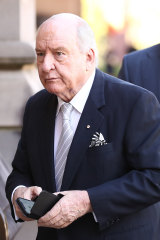 Cue Bobby Dylan: “And you know that something’s happening here, but you don’t know what it is, do you . . . Mr Jones?”

But let’s get to the hilarious part.

“The appointment,” Jones said, “was a PC gesture, completely unwarranted; and what message does Rugby Australia send Angus Gardner and Nic Berry when they are overlooked for such a prime refereeing appointment?”

Well Alan, seeing as you ask, I’m guessing Gardner was OK with it, as he has been on the injured list all year after having back surgery. While Berry couldn’t do that match as he was in Queensland, and would have had to have been tested and do a 72-hour quarantine until he got a negative result.

Meantime, you might be interested to hear the Kiwis – who know something about the caper – were so impressed with Perrett’s performance they have made inquiries about getting her over there to do some matches.

Fremantle Docker Sean Darcy in a post-match interview when asked what he would eat afterwards: “Oh f— I’ll be asleep pretty soon. Nah, I’ll have some pasta probably from last night and head off. F— … oh shit … My bad, my bad, my bad.”

Greg Alexander, on Fox, talking up Roosters wunderkind, Sam Walker. “And we heard from Trent Robinson, and a lot of the Roosters saying he has got a lot more bags in his tricks.” And he was right!

Broncos coach Kevin Walters, with a possible nod to Marie Antoinette: “If you look at a cake there is still three-quarters of the cake to eat, so that’s what excites me.”

Cameron Smith on the premierships lost to the salary cap scandal: “They’re still premierships to me. I still have my premiership rings at home. I put them on every now and again. They’re mine. I’ve got five.”

Damien Hardwick on being sledged after a tough loss: “A guy was giving me a tissue. I thought jeez, that’s a bit harsh. We’ve won three of the last four flags, mate, not sure whether I need a tissue.”

Sports Entertainment Network owner, former Herald Sun sports journalist Craig Hutchison, on his antagonistic nature vs his father’s: “You won’t find an enemy of Dad’s in eight decades on the planet, whereas I’ve probably got a new one before lunchtime on Monday.” 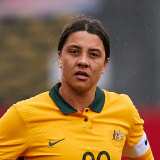 Sam Kerr on the Matildas’ 5-2 loss to Germany: “I don’t think we were very good. We need to pick it up. It was difficult. New players, new coach, a lot of people haven’t played at international level … we’ve got to learn from it.”

After winning three of the last four premierships, Richmond coach Damien Hardwick knows better than anyone: “We need to get moving, there’s no doubt about that, but the fact of the matter is premierships aren’t won in April.”

Dragon Zac Lomax on what makes Anthony Griffin a good coach: “He’s a person before he’s a coach. That’s what you want from your coach and your teammates as well.”

Team of the Week

Hideki Matsuyama. First Japanese man to win a major championship by winning the US Masters.

Kate Roffey. To be first female president of the Melbourne AFL team in its 162-year history.

Cruz Hewitt. The son of Lleyton won Australia’s under-12 claycourt title in both singles and doubles. C’mon!

Sydney Swans. Still undefeated for the season, they take on the struggling GWS Giants on Saturday arvo at the SCG.

John Morris. After just five rounds of the NRL comp, and sitting just outside the top eight, the Sharks dumped their incumbent coach.

Melbourne Victory. Won the W-League with a thrilling victory.

West Ham. Set for their best English Premier League season in quite some time!