Several debutants from leading regional stables on show. Nicely bred Mudgee 4YO 2. Healing Hands (I Am Invincible x Miss Alberta by Magic Albert) has taken a long time to get to the races, but recent Scone trial win was very impressive after being forced to change course a few times in the straight and is the one to beat!

Dangers: Gulgong-trained 1. Deceptive Cover made a nice debut at Scone behind a smart one and should be in the finish. Big watch on Orange mare 7. Saahirah who trialled quietly at home from the front and gets a soft draw with 3kg claim for her debut. Local 3Y0 5. Little Caesar hit the line strongly in a recent trial win; while another local 10. Sipharderson was hard in the market when showing plenty of speed on debut and gets in well after the claim over this trip. 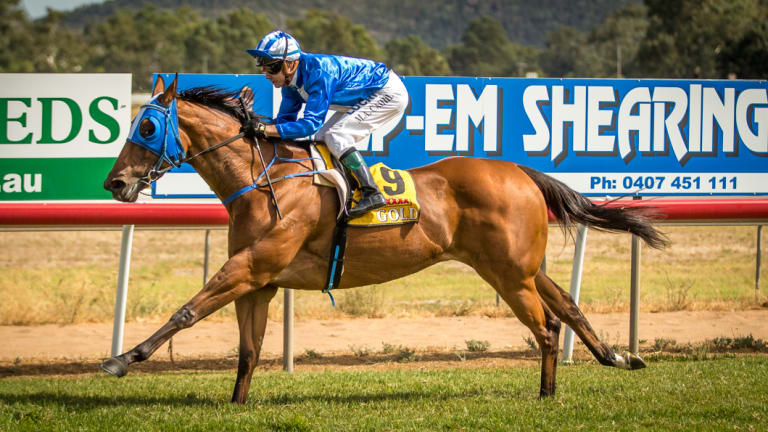 Room to burn: Dubbo hosts an attractive betting program on a wide and spacious track.Credit:Fairfax Media

Very keen on Gulgong visitor 6. Larynx from a smart stable who was scratched from Mudgee Cup day to be saved for this. Powered home first-up when specked in the market this track, and gets leading rider to off-set a wide gate.

Dangers: Forbes-trained 2. Caszar is screaming to win a race after two close seconds at his last two and should race just off the speed. Doubt anything else can win the race.

How to play it: Larynx to win and quinella 2 and 6

Staying battle for lower-graders, but local 6. Dad's Boy hit the line hard over a mile at Narromine last start, and is suited back up in trip from the good draw. Best value in the race.

Dangers: Wyong raider 3. Captain's Legend has been very consistent in stronger grade and won two starts back at Hawkesbury. Another local 5. Club Town should be put through all exotics. Came from a mile back in that same race at Narromine after a string of solid runs in better grade; while lightly-raced and well-bred Gulgong 3YO 13. Duntroon Man has found the line nicely in his last two and will ultimately win better races than this, but has drawn a very wide barrier.

How to play it: Dad's Boy each-way and quinella 3 and 6

Excited by the long-awaited return of smart Mudgee sprinter 2. El Mo who hasn't raced for more than nine months and had no official trial, but reportedly been working well and is the clear one to beat! This time last year won his maiden at Goulburn when heavily-backed before not beaten far in a strong Highway at Rosehill early this year. Has a stack of weight but all the class.

Dangers: Nyngan sprinter 3. Thermosa has won two of three in his first prep, and was impressive last start this track. Will come over from a wide gate and park just behind the speed for in-form claiming rider. Locally-trained 4. Westlink returned in good style this track finding the line from midfield, and his last win was second-up from off the speed over a similar trip. Include local 6. Invincible Thunder in a wider exotics, has had three runs back from a spell and ready to improve fourth-up down in weight.

Local mare 4. Go Beau Jangles returns from a five-month break, but normally comes to hand quickly. Won two straight in the autumn early in her prep this track and this isn't much stronger.

Dangers: Mudgee mare and hot favourite 7. Reprimand has been given a freshen-up after being run over at Warwick Farm, but is smart on her day, and also won two straight this track back in the autumn; while Narromine-trained 9. Malverna is consistently around the money and won two starts back this track. Another local 10. Bergdorf from the good draw; and Bathurst mare 3. Art 'N' Ollie, who has early speed and much better suited over this shorter course under a big weight, should both be included if you're playing wider exotics.

How to play it: Go Beau Jangles each-way and quinella 4 and 7

Typical open affair over the middle distance, but looks ideal for Scone-trained 5. Net Effect. Finished hard in a good quality CL3 at Muswellbrook before again finishing on at home carrying the same weight in a similar grade. Has an awkward gate, but profiles nicely.

Dangers: Several with even luck; especially Wellington 8YO 2. Lucky Elixir who hasn't won for a while, but got home well last start in a stronger grade at Quirindi. Has an awkward gate, but rider takes 2kg off. Narromine 10YO 1. Something Borrowed has a stack of weight and a wide barrier, but rarely runs a bad race and can get into the finish; while 6. Voyages only won his maiden three starts back, but is improving and will enjoy the wide stretch here over a suitable trip.

How to play it: Net Effect each-way

Another open one to finish, and by now they tend to get out in the middle. Despite not having figured second-up before, locally-trained 3. Sprezzatura gets into an ideal race over the right trip. Had a wide gate and 60kg first-up when still finding the line in a shorter race, and the step up in trip from a better draw suits.Dangers: Hawkesbury visitor 1. Good Verdict has hit the line hard in CL1 company last two and gets leading rider back on; while Mudgee mare 5. Miss Hugo A Gogo powered home to win this track last start, but has a wide gate and more weight this time.

How to play it: Sprezzatura to win