Track Soft 6/7, with the Rail True, so should trend slowly away from the fence.

Looks a Matt Dale affair this, with local-based mare 2. Exceed The Night ready to pay back punters after letting them down first-up at Canberra as a short-priced fancy. Failed to finish off, but gets a clear chance here over shorter trip to show why she took on some smarter winter customers in the city.

Dangers: Canberra filly and stablemate 8. Fabulous Fran looks ready to win after two career starts, the latest just run down over 1000m in that same race. Fitter again, and can dictate from the front over this trip. Big watch on 3YO Canberra debutant 4. Farage after trialling nicely.

How to play it: Exceed The Night to win 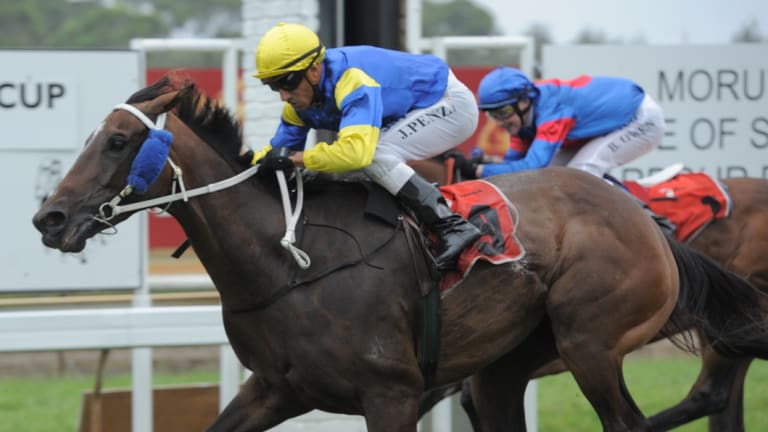 There are seven races scheduled at Moruya on Sunday.Credit:Graham Tidy

Goulburn mare 6. Denesc made a strong return when solid in the market hitting the line from midfield in a CL1 at Nowra, and this looks suitable second-up from a good draw.

Dangers: The form around the South Coast of 4. Zardoro is very good for a race like this, but he'll need some luck from a wide draw; while Hawkesbury visitor 2. Banter just missed in that same Nowra race after sitting on speed. Gets a nice draw to do similar here and is a second-up winner.

How to play it: Denesc to win and quinella 2 and 6

More open affair, but 3YO Hawkesbury filly 14. Rose Of War looks well placed and weighted to break through at her sixth career start. Has found the line nicely in two runs back from a spell and gets leading rider aboard.

Dangers: Local mare 11. Tipta Josie is the clear threat. Has finished strongly in two runs back from a spell and should get a nice trailing run from midfield. Big watch on 3YO Kembla first starter 4. Budderoo Prince who looked good in a recent Nowra trial win, but has drawn a tough gate; while Warwick Farm-trained 6. Hiemal has shown gradual improvement this prep and suited by longer trip, but has also drawn wide.

How to play it: Rose Of War each-way

Race with good depth! Love the placement here with 4YO Braidwood mare 4. Elegant Ellen who comes back in grade and trip from a stronger Rosehill Highway when run over late. Was very strong previous start leading all the way in a BM 58 (1400m) at the Sapphire Coast, and weight hike is off-set by a cosy draw.

Dangers: Kembla-trained 7. Sacred Son has improved this prep and really attacked the line last start in a good quality Nowra CL2, and from a good gate here will be motoring home. Canberra-trained 1. Trumbo was banging down the door before finally cracking his second victory under a big weight at the Sapphire Coast, but this is stronger. Randwick-trained 3. Art Of More has been mixing form, but saluted last visit to the South Coast when a well-backed favourite four runs back. Another South Coast mare 6. And There Is More hasn't been far away in stronger grade sprints and the extra journey is a plus.

Keen on Goulburn-trained 2. Biodynamic who is on the quick back-up after flooding home from well back first-up in a decent CL1 at Canberra last Sunday. Had solid and stronger metro form up to the mile last prep and this looks a suitable trip second-up.

Dangers: Progressive Canberra mare and perennial back-marker 6. Te Ata found the line nicely in a BM 60 two runs back before powering home from well back at Wagga last start. Will again go back from a wide gate and look to surge home. Has more ability than most of these and is headed for better races; while 5. Monterey Magic has been close-up last two when hard in the market and is hard fit now.

How to play it: Biodynamic and Te Ata both to win

Feature race. Queanbeyan-trained 2. Cliff has been given a two month freshen-up coming back coming back from the longer BM 78 Queanbeyan Cup where he was just pipped. Even though 2000m to 1300m is a dramatic drop back, still has enough early speed to take up a forward position and will be very strong through the line.

Dangers: Nowra-trained 1. Budderoo Knight has been campaigning well in much stronger city grades, and will appreciate coming back to this company, but has to lump a big weight from a wide barrier. Goulburn-trained 3. Tiger By The Tale is another who progressed through to metro company, and also looks well placed back to this grade. Will drift back, but can reel off a blistering final 400m. Braidwood mare 5. Akiko Gold resumes and normally fires first-up; while local mare 6. Belle Tournure returned from a spell in terrific fashion charging home to win a BM 58 at the Sapphire Coast and normally holds her form into a second-up run. Gets a nice drop in weight and good trailing draw.

Open battle to finish, but keen at the value on Queanbeyan-trained 5. Brockton Punch who didn't get a lot of luck in a BM 82 at Wagga last start. Previous form was solid and peaks now to trail what should be good speed up front and get home over the top.

Dangers: Kembla-trained 3. Count Dekroner resumes from a fourth-month break after mixing it with much stronger metro company through the winter. From astute stable and normally comes to hand quickly over the shorter trips. Nowra mare 2. Leami Astray brings very good city sprint form to a race like this and will get a cosy on-speed position from the fence draw, although the inside may be a slower "lane" late in the day.

How to play it: Brockton Punch each-way and box exacta 2-3-5