MIAMI GARDENS, Fla. — Stephen M. Ross swears he is not embroiled in a third-set tiebreaker with Larry Ellison, the billionaire co-founder of Oracle who bought the BNP Paribas Open in Indian Wells, Calif., a decade ago and transformed it into a tony desert party for tennis players and fans.

Still, when the moved and improved Miami Open begins this week at Hard Rock Stadium, home of Ross’s Miami Dolphins, it will not be hard to imagine Ross, a billionaire real estate developer, keeping a tiny scorecard in his back pocket.

“Larry’s done a great job,” Ross said. “He set the bar high, and it’s all great for tennis. But for us, it’s more natural not to compete, or at least to do so in our own way.”

Ross, who bought the Dolphins in 2008 and spent $550 million renovating the stadium, stepped in when IMG, which owns the Miami Open, found itself at an impasse with a Key Biscayne resident who controlled the land where the tournament had been played since 1987.

That man, Bruce Matheson, refused to allow $50 million worth of renovations to the Crandon Park site, and his prolonged lawsuits convinced the tournament that it was time to go.

Rather than see the tournament — and its hundreds of millions in local revenue — uprooted from South Florida to Orlando or China, Ross decided to partner with IMG and move the tournament about 20 miles northwest to his football stadium. He spent an additional $72 million to transform it into a state-of-the-art tennis venue.

The move wasn’t well received by everyone.

“Key Biscayne had a very intimate setting, and you can’t beat the drive over the Rickenbacker Causeway, with blue water on both sides of you,” said John Isner, the defending Miami Open champion. “We had a lot of history in that place, and that stadium court will always be very special to me.”

At the new site, a temporary main court was erected on the football field, with half of the seats were blocked off by screens. A 5,191-seat grandstand court, two other show courts and eight additional match courts — all permanent — were built on top of parking lots.

On a recent tour, those lots were indiscernible behind purple flowers, artificial grass, 35-foot mature palm trees costing $35,000 a pop, and a giant fountain that guards one of the many entrances to the stadium. There is also a 40-by-90-foot video screen, the largest in tennis, just outside the stadium in a spot modeled after Wimbledon’s Henman Hill, minus the grass.

The change recalls the United States Open’s move from the charming but outgrown West Side Tennis Club in Forest Hills in 1978 to the more functional, if less romantic, U.S.T.A. Billie Jean King National Tennis Center in nearby Flushing Meadows. It took a while to get used to the new digs, but no one would ever want to go back to the old ones. 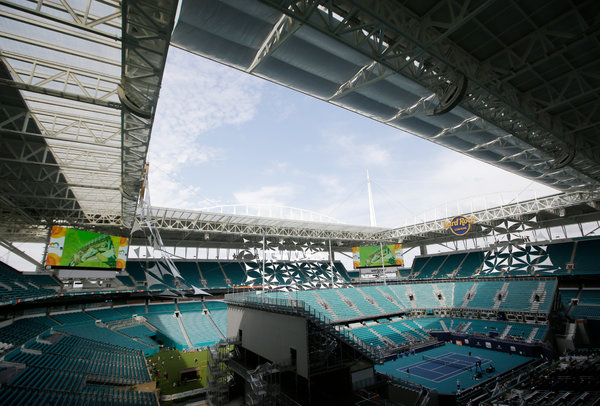 “This place has a much larger footprint, so we can do more things,” said Tom Garfinkel, the Dolphins’ chief executive. “We are giving people an unprecedented luxury experience in tennis, just like the N.F.L.”

Tournament organizers did not take the word “luxury” lightly. The stadium court — painted in colors called Oasis Blue and Biscayne Blue — seats 13,800, the same as the main court in Key Biscayne. But this court features 4,738 premium seats, many that resemble Barcaloungers, with individual television screens. These seats range in price from $50,000 to $70,000 for the two-week tournament. Some are right on the court.

Premium-seat packages, most of which were sold out two months before the start of the tournament, include private dining rooms. Some suites have seats made out of Ferrari leather. For a privileged 1,000 visitors, there is a dedicated entrance from a private parking lot, in which spectators pass through a tent lined with art, including works by Pablo Picasso and Andy Warhol that can be purchased for upward of $1 million.

Ticket prices at every level have increased by up to 40 percent over last year, though several thousand grounds passes are available for as little as $15 each day. Sales by the end of last month were up 25 percent, thanks, in part, to Dolphins season-ticket holders who have been cajoled into watching tennis.

“There’s a bit of a challenge in giving people the confidence that this really is for the best,” said James Blake, the tournament director.

Ross helped choose everything on the site: the flowers, the gigantic paintings that line the stadium corridors, the tiles on the bathroom walls.

“I had a picture in my head of what I wanted this to look like, the same way I do my real estate deals,” said Ross, who is also behind Manhattan’s Hudson Yards project. “It’s all in the details. Little things matter. People notice, and they’re watching for those details.”

The number of practice courts, many with spectator seating, have doubled from those at Key Biscayne, to 18. But unlike in Key Biscayne, those courts will not be turned over for the public to play on after the tournament ends.

The players, at least, should be happy. Their amenities have been enhanced, with dining areas and gym spaces tripling in size. The top eight seeds in the men’s and women’s singles draws, as well as all former champions, will be given private suites to be used by their entourages.

But organizers see the event as more than a tennis tournament. The grounds will open at least two hours before play begins each day to encourage people to come early to eat, shop and listen to concerts by local musicians.

“What we wanted was a venue that would allow us the freedom and flexibility to grow and innovate the event,” said Mark Shapiro, president of Endeavor, IMG’s parent company. “Key Biscayne was lovely, but we simply outgrew it. What we’ve got now is going to be supernatural, like walking through a Lollapalooza, and a tennis tournament grew out of it. Forget becoming the fifth major, we’re the new U.S. Open.”