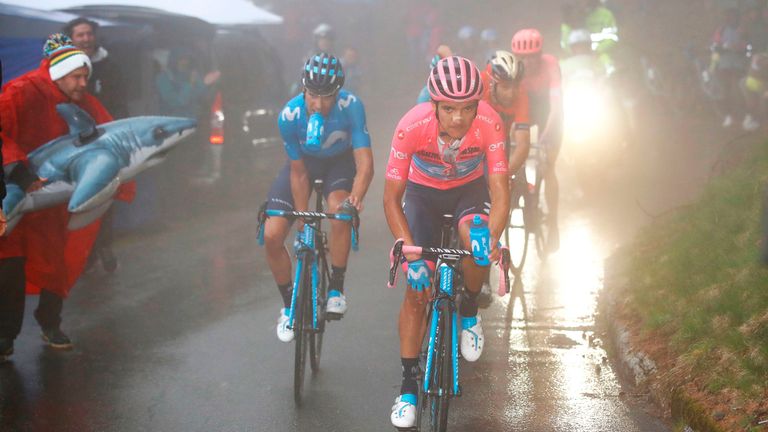 Ciccone won the 194km stage from Lovere at the end of a long breakaway after the race organisers decided that the route would avoid the much-feared, snow-covered Gavia pass due to the risk of avalanches.

However, in the general classification, Carapaz took a big step towards a Giro crown by holding off two-time champion Vincenzo Nibali and increasing his lead over Primoz Roglic.

The Movistar rider regained contact with Team Bahrain Merida’s Nibali in the gruelling ascent up the Mortirolo pass, an 11.9km climb at an average gradient of 10.9%.

Race favourite Roglic was dropped and eventually lost more than a minute allowing Carapaz to retain the pink jersey with a 1min 47secs lead on Nibali, who leapfrogged Roglic into second place, Roglic is now 2:09 behind the leader.

“The truth is that it’s been a very complicated day, especially because of the weather conditions and the climbs,” said Carapaz.

“But as a team, we’ve worked very well for Mikel Landa and myself. It’s another good day in terms of time gained on GC.”

The final part of the brutal Mortirolo climb took place in a sinister crepuscule, with the only light coming from the TV motorbikes’ headlights as rain further reduced visibility. 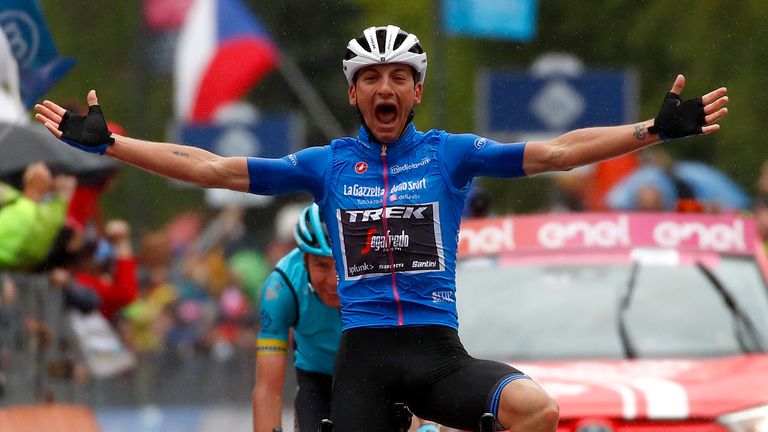 Stage victory helped Ciccone increase his lead in the mountains classification as the main favourites had shown no interest in the stage victory.

Among the top three contenders, only Nibali had already climbed the Mortirolo in race conditions, and he looked to take advantage of that when he attacked early on, hoping to then increase a potential lead in the descent.

But while the move was damaging to Roglic, Carapaz was well-protected by his team-mates, including Mikel Landa, and the Ecuadorian eventually clawed his way back.

Roglic had Briton Simon Yates and Dutchman Bauke Mollema with him to try to limit his time losses.