Ronnie O’Sullivan gave the returning Crucible fans a treat by firing three consecutive centuries to wrap up a first round win over Mark Joyce – but fears their overenthusiasm could wreck his bid for a seventh world crown.

O’Sullivan revealed he was accosted on Saturday in a “nightmare” incident at a city centre restaurant, and will now cut back his appearances in public in order to minimise the risk of being forced to withdraw due to a positive test later in the tournament.

O’Sullivan, who said that two members of the restaurant’s staff had been forced to intervene, added: “Ninety-nine per cent of the people are fine but it’s just the odd one who was a bit boozed up and having a mental one. It was so busy and this geezer was a nightmare.

“If I didn’t have to be clean for this tournament it wouldn’t matter, but if I reached the quarter-finals it would be a sickener to have to pull out. As a sportsman I can’t work if I get ill so that’s my only problem.”

Despite establishing a 6-3 lead O’Sullivan had struggled in an error-strewn opening session, but ended it by becoming only the eighth player to make three consecutive Crucible centuries as breaks of 124, 137 and 112 finally saw him ease over the line.

O’Sullivan added: “It was great to have the crowd in there, they miss their snooker and I probably would have given up mentally in that match if there was no crowd there.

“I’d have thought, I’ll get out of here and go home and do a bit of punditry, but because the crowd are here you feel you’ve got to perform because they’ve paid their money and come out to watch.

“When I think back to my great matches and you see the crowd’s faces and the pleasure that you give them when you play an unbelievable performance, that sticks in your mind that that’s what I’m here to do.”

With sanitiser stations provided around the venue, fans had their tickets scanned before sitting in designated seats, socially distanced. 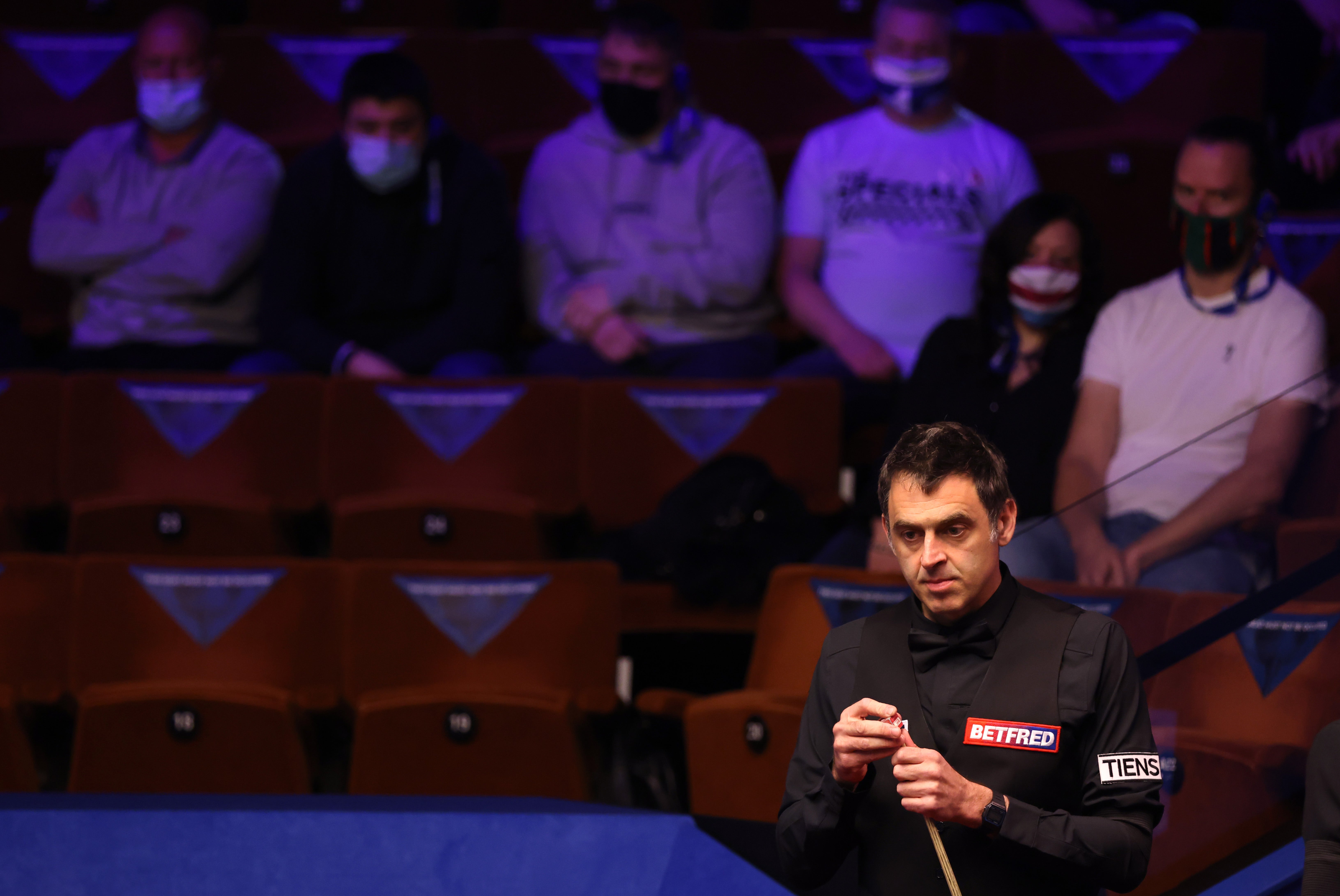 Crowds returned to the Crucible

Play in the afternoon session was paused just before 3pm in order for the sport to pay tribute to the Duke of Edinburgh.

Neil Robertson returned to his seat midway through a break of 25 in his match against Liang Wenbo, and the partition wall was raised in order for players on the adjoining table to also take part.

Robertson established a 6-3 lead over Liang at the end of their first session, which is due to conclude on Sunday.

Robertson fashioned a break of 108 on his way to establishing a healthy advantage, and moved three clear at 5-2 after Liang fluffed the simplest of blues.

But Liang, who lost the UK Championship final to Robertson in 2015, rallied with a break of 126 in the ninth frame giving him a glimmer of hope.

Qualifier Jamie Jones recovered from a three-frame deficit to claim a 5-4 overnight lead against eighth seed Stephen Maguire, while Masters champion Yan Bingtao is tied at 4-4 against Martin Gould.

World Snooker Tour confirmed it had issued written advice to players prior to the tournament to “be careful” when they are in public areas.