One is a Hollywood star worth an estimated £56million, while the other is a fifth-tier football club in a Welsh market town.

But Ryan Reynolds and Wrexham AFC could now become united after it emerged the Deadpool actor wants to invest in the National League team.

Reynolds and Rob McElhenney, an actor are best known for creating It’s Always Sunny in Philadelphia, are set to make the unlikely foray into UK football.

The American duo won approval from 98 per cent of club members to get to this stage, and a takeover could see £2million invested in the fan-owned club.

Wrexham director Spencer Harris said he had spoken to the duo on a Zoom call last night after the club was backed to hold further investment talks.

It is not yet clear why the actors want to invest in the world’s third oldest professional football club, with the club saying it was a ‘question for them in good time’.

Welsh First Minister Mark Drakeford told ITV’s Good Morning Britain that there were ‘huge benefits’ to the duo being part of Wrexham AFC, adding of Reynolds: ‘If he can play centre forward, I’m sure he’d be welcome.’ 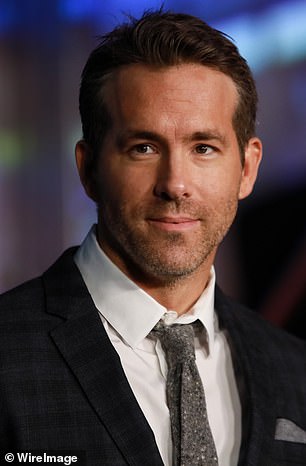 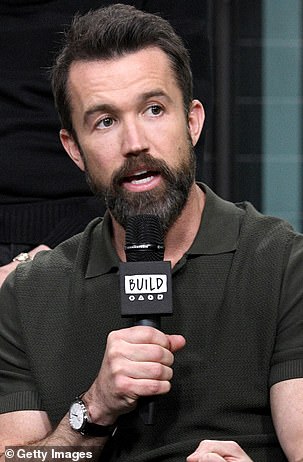 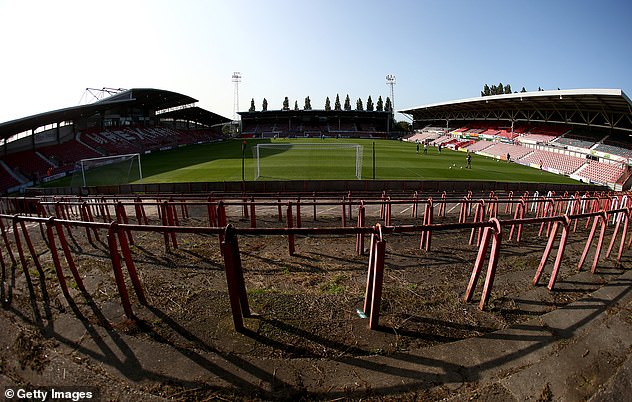 Wrexham could see a potential £2million investment from the entrepreneurial actors. The club’s Racecourse Ground is pictured on September 17 before a Uefa Europa League match

Talks with the actors will continue after Wrexham Supporters Trust Board members voted overwhelmingly in favour of the investors at a general meeting.

Reynolds, who has varied business interests, last night replied to a 2012 tweet that said: ‘You never know when Ryan Reynolds is going to turn up in Wrexham.’

Wrexham director Spencer Harris, who is also a director of the Supporters Trust, said of the proposed Hollywood investment: ‘It’s still at the stage where we have to finalise the deal and bring it back to the members at a second AGM.

‘But I would like to think that Rob and Ryan think Wrexham is an attractive prospect with fantastic potential.

Reynolds, who has varied business interests, last night replied to a 2012 tweet that said: ‘You never know when Ryan Reynolds is going to turn up in Wrexham.’ The Canadian-born actor told his 16.5million Twitter followers: ‘Yep, you never know.’

‘People with the professionalism of Rob and Ryan do not come around very often and news of their interest is quite exciting for the supporters I’m sure.

‘They are very driven individuals and very successful people in their industry. But from our discussions I can say they are both down to earth and want what is best for the club.’

Mr Harris said contact had originally been made with representatives of the two actors before McElhenny and Reynolds had personally spoken to Wrexham officials.

‘I’m sure people will consider it a remarkable story,’ Mr Harris said. ‘But I would ask for people to give us time to complete the story. 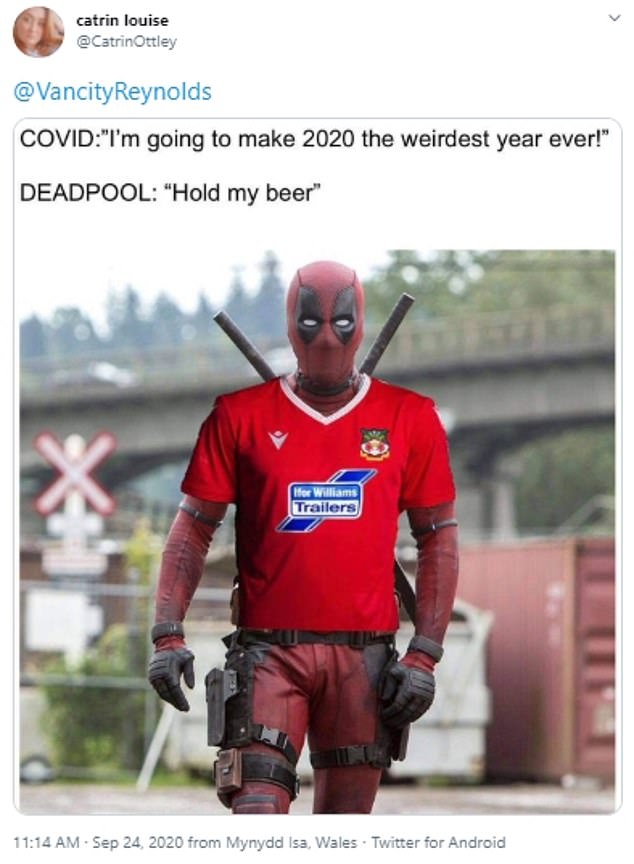 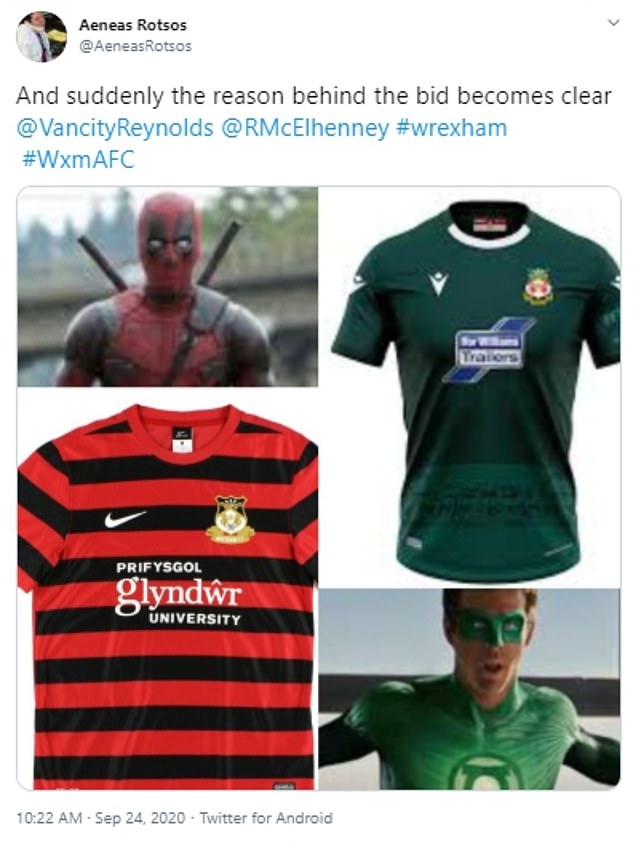 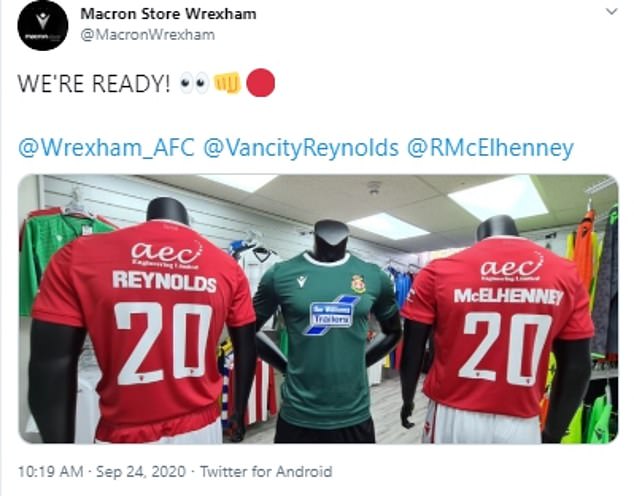 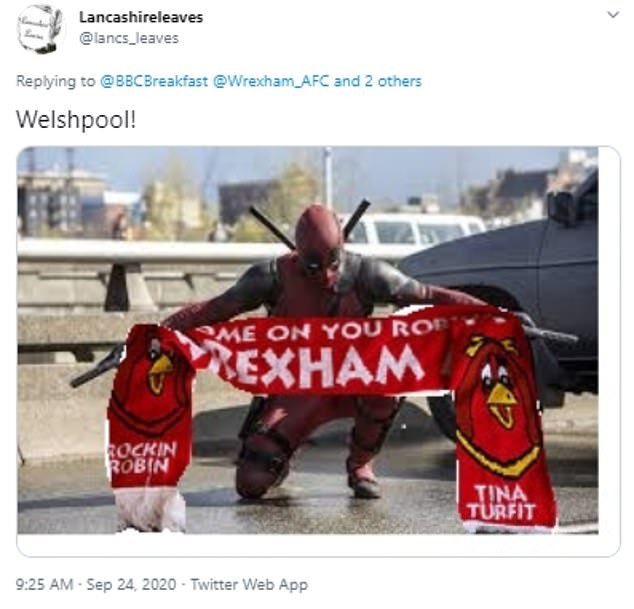 Wrexham has been a fan-owned club since 2011. A Wrexham Supporters Trust Board spokesman said: ‘Talks with the proposed bidders will now continue and we are in a position to confirm the two people interested in investing in Wrexham AFC.

‘Rob McElhenney is an American actor, director, producer and screenwriter, best known as the creator of It’s Always Sunny in Philadelphia. 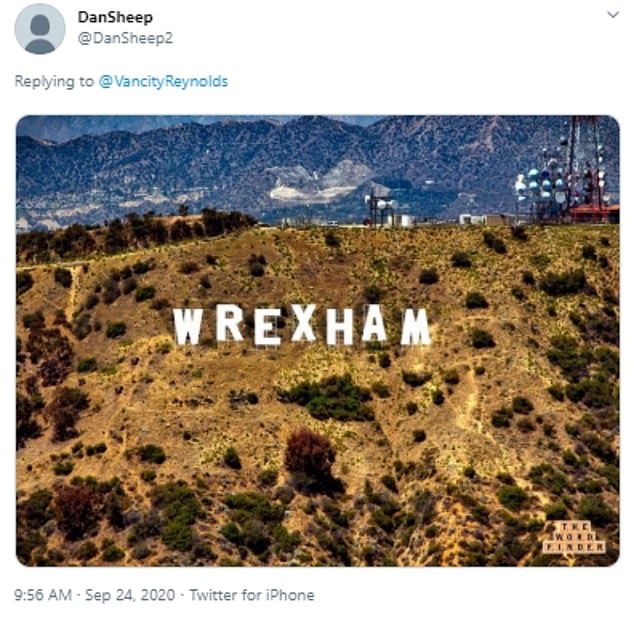 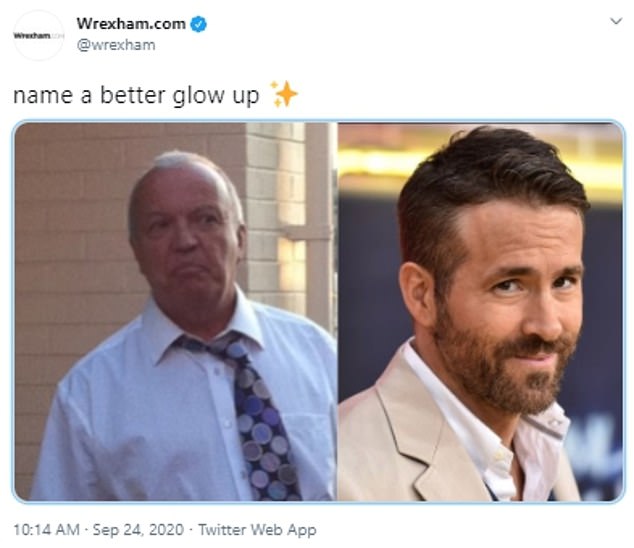 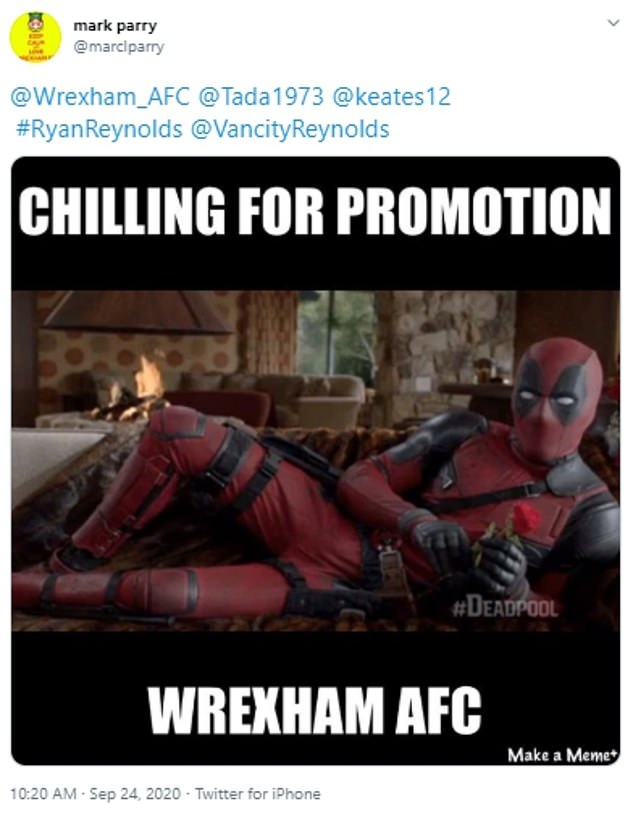 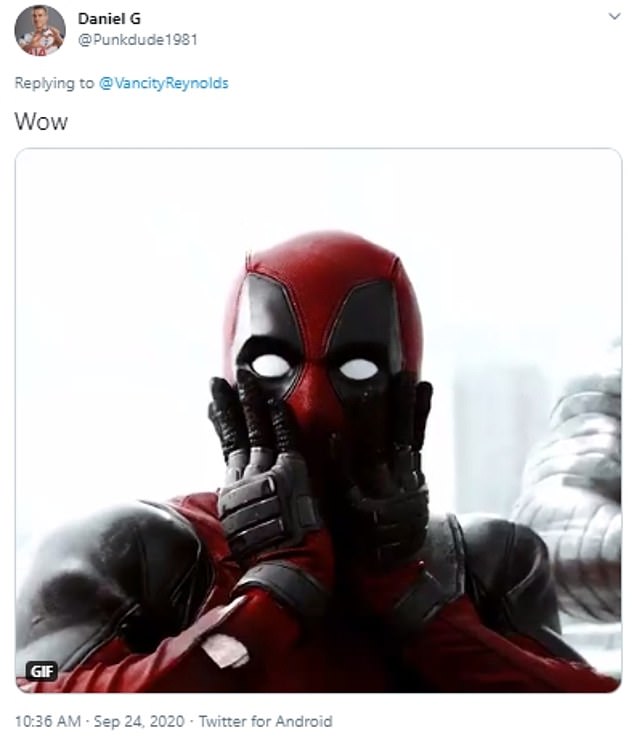 ‘In due course, Mr McElhenney and Mr. Reynolds will put forward their vision for Wrexham AFC and proposal for members to vote on at a second Special General Meeting.’

They fell out of the football league in 2008 and have remained a non-league club since then and became fan-owned in 2011.

The National League – the division in which Wrexham play, one league below the Football League – has yet to start its season because of the coronavirus pandemic. 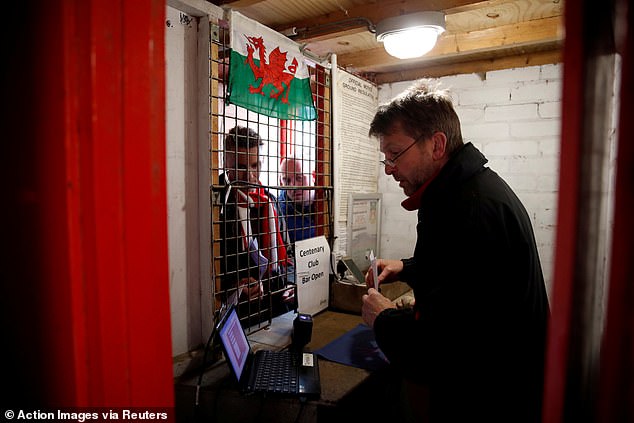 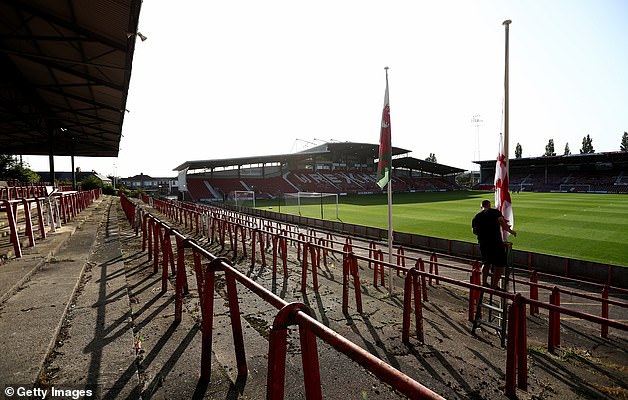 Other recent investments by the two actors include Reynolds buying a stake in Aviation American Gin in 2018 and Mint Mobile last year.

McElhenney was involved in a Philadelphia bar called Mac’s Tavern in 2009, and was also said to have been an investor in the Robinhood stock investment app.

Another Hollywood star to have invested in Welsh football is Mindy Kaling from The Office, who owns shares in Swansea City.

She was revealed to be among the stakeholders in a US consortium that bought a controlling stake in the Championship side in 2016.

From Russell Crowe to Elton John, how Ryan Reynolds is in line to join ranks of celebrity sporting owners

Wrexham have confirmed that Hollywood stars Ryan Reynolds and Rob McElhenney want to invest in the National League club.

The actors would not be the first celebrity owners of a sports team. Here is a look at some other examples:

Beckham’s move to Major League Soccer in 2007 was a landmark moment in the history of the league. As a part of his transfer to the Los Angeles Galaxy, there was an agreement that allowed the former England captain to own an MLS team for a discounted fee. He exercised that option in 2014 and the team played its first match this year.

The Bollywood star bought the team at the inception of the Indian Premier League in 2007. The franchise has gained immense popularity due to its association with celebrity owners – film producer and entrepreneur Juhi Chawla is also an owner – and won the IPL in 2012 and 2014.

Raised in Sydney, the film star bought the Rabbitohs along with businessman Peter Holmes a Court in 2006. Holmes a Court stood down two years later amid rumours of a rift with Crowe, who remains involved with the rugby league club.

Before he became United States president, one of Trump’s ambitions was to own a sport franchise and he coveted an NFL team. Unable to make this happen he purchased the New Jersey Generals American football team of the newly formed USFL in the early-1980s. By 1986 the league had collapsed and many blamed Trump for its demise.

The British businessman took over as chairman of the rugby league club in 1997 with a promise to make them the best in the world. The Broncos finished second in Super League and reached the Challenge Cup final but by 2001 Branson was gone and a slow decline followed.

The singer became club chairman in 1976. His ambition was to take Watford form the old Fourth Division to the First Division – and he succeeded. Under Graham Taylor, the Hornets finished second behind champions Liverpool during the 1982-83 season. John stepped down as chairman in 2002.