ARCADIA, Calif. — The mood was tense on Friday at Santa Anita Park, one of the grandest venues in horse racing, as the usually mellow mountainside track in Los Angeles County reopened after a nearly monthlong shutdown. Twenty-two horses had died on the grounds over 11 weeks.

“It’s a little different vibe,” Joe Locke said while sitting alongside his wife, Sandy. They are horse owners from Houston.

There was relief after it was over: All the horses survived.

On the morning of March 14, a garden-variety filly named Princess Lili B crossed the finish line of a half-mile workout at the track and collapsed with two broken forelegs. She had previously competed twice, placing fifth and ninth, in the lowest rungs of racing at majestic Santa Anita and earned $1,345, barely enough to cover expenses.

The track had already been closed to racing for two weeks when Princess Lili B became the 22nd thoroughbred fatality since the winter meet began on Dec. 26, helping push racing toward a painful self-examination and contentious reform.

During the hiatus, racing executives imposed reduced limits on the common medication Lasix, blamed by some critics for exposing horses to trauma, and vowed to better diagnose pre-existing conditions that could lead to injuries. They pledged to regularly evaluate the track, which has fallen under scrutiny as excessive rains may have made it more treacherous (studies are inconclusive).

And officials abolished routine use of the jockeys’ whips, even though the practice has not been linked to heightened risks for horses.

The Hall of Fame jockey Kent Desormeaux could sense a difference when the riders met Friday for their daily session with their chaplain.

“All we wanted to pray for today,” he said, “was for the safety of all the jockeys.”

Desormeaux was a part of a chorus of jockeys, trainers, owners and patrons who want to allay fears that the main racetrack and the training course endanger the horses.

“There is nothing wrong with either track,” Desormeaux said. “Both are in superior condition.”

Friday’s crowd included the Santa Anita first-timer Joe Rench of Louisville, Ky., who had fretted that the track might remain dark during his visit to the area. 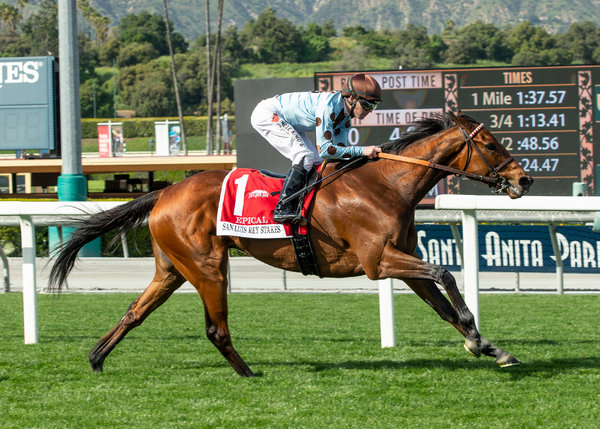 “I was like, please, please be open,” he said. “I was scared I wouldn’t be able to attend. This is bucket list.”

Some observers emitted sighs of relief as the first race — for undistinguished nonwinner fillies, which would have fit Princess Lili B — ended without incident.

“It’s great to be back. Been a long time,” said Aaron Gryder, a 32-year veteran jockey, after piloting Discrete Stevie B to victory.

The winner’s exultant trainer, Marcelo Polanco, said, “Nothing like winning, especially after all that has happened.”

The only audible deviation from normal race days was the track announcer Frank Mirahmadi’s repeated alert that the prohibition on whipping had not yet begun. Jockeys and trainers, as a whole, are not happy about the ban, with some saying management capitulated to PETA and other critics.

But their chief concern is the condition of the track, which received a general thumbs-up.

Fittingly, the feature race, seventh on the card, was taken by Epical, trained by Jim Cassidy. As president of the state’s trainers association, he has tried to persuade his peers that the updated policies, though drastic, are needed.

“People don’t like change,” he said, “but it’s a different time now.”

He described his 415th win in a three-decades career as especially rewarding.

“I’m just wiped out about this whole thing,” he said. “It was a lot of pressure.”

Minutes earlier, Cassidy had texted a fellow official with the association: “6-for-6.” Meaning, all horses in the first half-dozen races had finished safely.

“There are still going to be trying times,” said a relieved Tim Ritvo, chief operating officer of the Stronach Group, which owns Santa Anita.

Ritvo is braced for short-term losses in attendance and wagering, but he contended that what he described as “the new normal” can generate long-term gains.

“Eventually, all tracks will be under stronger scrutiny,” he said.