Crackdown. Natural justice. They don't seem like natural bedfellows, more of an each-way bet. But together they open plenty cans of worms.

The NRL – aka The Cannery – are stuck in an invidious position, but if you're cracking down then it has to be on all. Just as natural justice has to be given to all. 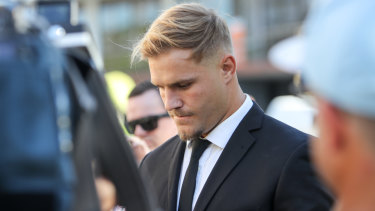 Jack de Belin’s sexual assault allegations have opened a can of worms for the NRL.Credit:Adam McLean

That doesn't seem to be the case. And the continual reactionary changes simply put a spotlight on it.

Given the number of cans that keep popping up, at least they're getting plenty of practice.

After meeting with the clubs bosses on Friday, the Cannery are going away to think things through and will come up with a plan on February 28.

They'll consider immediately standing down players who have been charged with serious off-field offences.

Given the number of cans that have been exploding all over the place this summer, even the implementation of that will open up even more.

Will that apply to players currently facing those allegations? Or just new ones?

They've certainly got plenty of test cases in the pipeline to mull it over with. Not just any old test cases either – some for the biggest names in the game.

Ben Barba, Jarryd Hayne, Jack de Belin, Dylan Napa. Can after can of worms just waiting to have top ripped off.

They weren't the first cans to roll off the production line and they certainly won't be the last.

It got to the point where the Cannery's boss, Todd Greenberg, couldn't stand it any more. Enough of this "train wreck", it was time for action.

He'd been given the all clear by the Cannery's commission to bring out the big stick: "Let's go boys, we got ourselves a crackdown to perform."

In the blink of an eye, Barba was not only sacked by the North Queensland Cowboys over his allegations of domestic violence, but Greenberg also handed him a life ban.

The crackdown box has certainly been ticked, but what about the natural justice one? 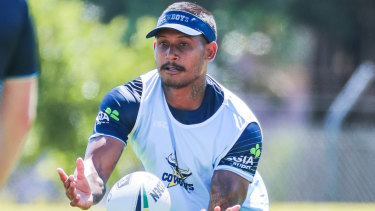 Ben Barba got a crackdown, but was he given natural justice?Credit:AAP

Greenberg saw the footage and decided it was so bad he had to act.

But the police were yet to charge Barba. So I'm guessing we've decided to just give natural justice the old heave ho?

This in no way condones what Barba's alleged to have done, but one of the big problems with these incidents is they seem to be dealt with on an ad-hoc basis.

If Barba's not allowed to return to the game – for an alleged incident he hasn't even been charged for – why is Matt Lodge playing for the Brisbane Broncos? On a recently improved contract?

His rampage in the USA a few years ago was seriously terrifying and was certainly worthy of a life-time ban.

He spent time in New York City's infamous Rikers jail as a result and is still paying compensation to the family he terrified.

If he's allowed to reform himself and return to the game, why can't Barba? You either take a stand against violence against women or your don't.

(Just for the record, my vote is you do.)

Lodge isn't the only current player in the NRL who's spent time in jail either so the point of raising his name isn't to pick on him, merely to raise a point.

Which seems an appropriate time to bring de Belin back into the conversation. It's his case that's currently causing an uproar and the reason why the Cannery's head is in a spin.

He's had the natural justice box ticked – for the time being – but there's only a hint of a crackdown. That might come in a fortnight.

Instead, the status quo has de Belin not only facing serious allegations in court, but also able to play for NSW in this year's State of Origin series.

Maybe even next year's as well. And if St George Illawarra can work out how to win after July maybe even a premiership – given potential court time frames and all.

Right now, natural justice means he's allowed to play until he either pleads guilty or is found guilty.

The Cannery is considering changing that so he can be stood down until proceedings end.

What if he's cleared in 18 months time? Do we all start ringing our hands that natural justice should've been observed? Maybe change the rules back? 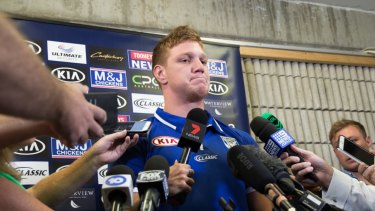 Bulldogs prop Dylan Napa faces a ban for being the victim of a crime.Credit:Janie Barrett

Then there's Napa. Who's only actual crime is having one committed against himself, given it's illegal to release private videos without consent.

Not so much a can of worms as a video of one.

But it brings in the third box you can decide to tick, the not-a-good-look box.

Napa's facing a ban – crackdown box pending ticking from the Cannery's integrity unit – and his new club, Canterbury, will lose out. Apparently they should've known the videos existed and not signed Napa.

Meanwhile, the Roosters, whose culture he was in when the videos were made, get off scott free. That doesn't even seem like regular justice, let alone a natural one.